The Democratic Party's new guiding light rips up the country and Ronald Reagan. 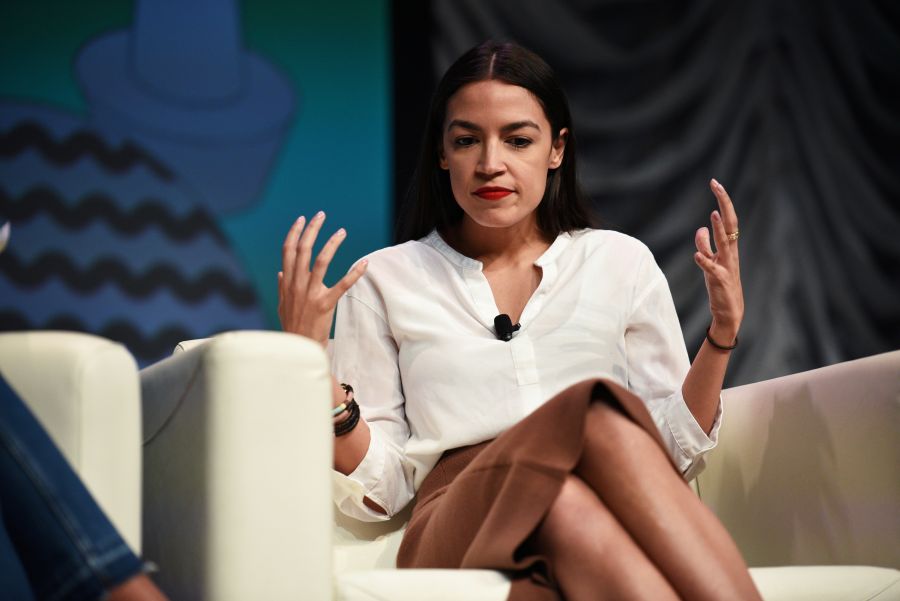 U.S. Congresswoman Alexandria Ocasio-Cortez speaks about the first few months of her tenure in congress with Briahna Gray at the South by Southwest (SXSW) conference and festivals in Austin, Texas, U.S., March 9, 2019.

Remember when Rep. Alexandria Ocasio-Cortez declared “I’m the boss”? Well, America, it seems the boss really doesn’t like you much. In fact, yesterday at the South-by-Southwest Conference and Festivals (SXSW), AOC suggested America is currently “garbage.” Oh, and by the way, Ronald Reagan was a racist.

When asked about her Green New Deal and Medicare for all, the democratic socialist spoke of an America in decline. (Here’s her extended quote. Like radical anti-Semite Rep. Ilhan Omar, whenever AOC says something offensive or idiotic she has a habit of saying she was taken out of context. Or denies having said what she said all together.)

I think the thing that is really hard for people to sometimes see is that when we are on this path of a slow erosion and a slow, slow, slow, just like move away from what we’ve always been, we’ll be a hundred miles, you’ll, you know you won’t even realize that you’ve drifted a hundred miles. So, when someone’s talking about our core, it’s like oh this is radical, but this isn’t radical, this is what we’ve always been.

America, she’s saying, has always believed — at its core — ideas that would in fact destroy America. In fact, these destructive ideas are what made us the most powerful, productive nation on earth.

It’s just that now we’ve strayed so far away from what has really made us powerful, and just, and good, and equitable, and productive, and so I think all of these things sound radical compared to where we are but where we are is not a good thing. And this idea of like 10% better from garbage, is, shouldn’t be what we settle for, it’s like this like it feels like moderate is not a stance it’s just an attitude toward life of like hmmm.

“Where we are is not a good thing?” “10 percent better than garbage shouldn’t be what we settle for”? Will she be asked to explain exactly what she meant by “garbage”? Or will this statement, like the original Green New Deal documents on her website, vanish into thin air?

Before she got around to her garbage comment, Ocasio-Cortez trashed Ronald Reagan.

And it’s this whole tragedy of the commons type of thinking where it’s like because these one, this one specific group of people, that you are already kind of subconsciously primed to resent, you give them a different reason that’s not explicit racism but still rooted in a racist caricature.

Allie Beth Stuckey offered a quick-witted reply. She could have added how Reagan lifted the entire working-class America out of its liberalism-induced malaise of the ’70s.

I guess when your historical knowledge only dates back 2018 it’s hard to remember things like Reagan amnesty. https://t.co/um31ac0fmJ

For Those Keeping Count

Alexandria Ocasio-Cortez has now defended in a matter of days: the brutal and deadly Maduro regime in Venezuela, the clear and venomous anti-Semitism of Rep. Ilhan Omar, and defended herself against allegations of siphoning off to God-knows where a million dollars in campaign contributions. (Among other campaign ethics violations.)

Meanwhile, in matter of weeks, she has come out against airplanes, the American border and America itself; to say nothing of cars, cows, FDR and Ronald Reagan.

Thus far, it seems she’s left baseball and apple pie alone. However, the day is young.

Addendeum: On SXSW and Socialism

Although SXSW is generally the leftist equivalent of Disneyland, it does have its better moments. This Tuesday, Stream Executive Editor Jay Richards will be starring in a session titled “Religion, AI and the Future of Work.”

Meanwhile, Ocasio-Cortez might want to mark March 27 on her calendar. Jay will be at Notre Dame debating Bhaskar Sunkara of Jacobin Magazine. Sunkara is the former vice-chair of the Democratic Socialists of America. The topic: “Is it Time to Give Socialism a Try?” AOC should go, even if she has to take one of those planet-wrecking airplanes. She’ll likely learn a thing or two from Dr. Richards.