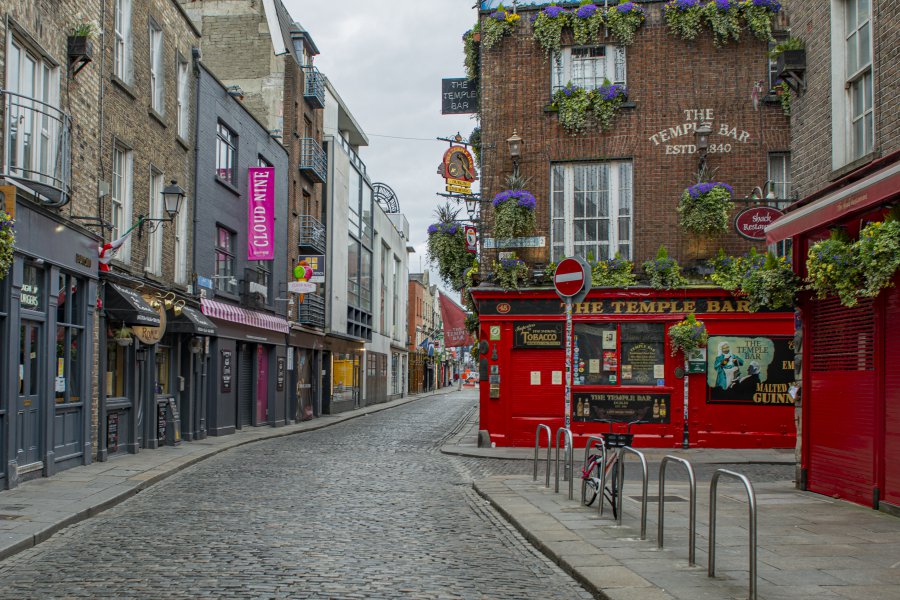 A street in Dublin during the Irish lockdown.

“Ireland is one of only two countries in Europe where a person of faith cannot attend religious services,” notes the Irish political party Aontú. The major political parties “have taken a far more restrictive policy against the holding of Church Services than any other country in the world except North Korea and Saudi Arabia.”

There’s a smack-down for you. Aontú asks the Irish government “to publish plans now in order that a gentle easing of restrictions for Religious Services can happen for Easter Week.”

They know the virus poses “a serious threat to the well-being of the Irish people.” Still, much of the effect Ireland suffers is the government’s fault. “Ireland has had the longest and most severe lockdown of any other EU country. Government policy in terms of travel, Nursing Homes, health care capacity, inoculation and all Ireland Cooperation has led to much of the devastation that has happened in this country.”

That shouldn’t continue to include keeping people out of their churches.

In America, it’s hard to disengage the question of when to open churches from the bigger culture war issues. For every person who tries to talk about policy, five put the matter into their favorite culture war categories.

Some people said “Churches must be open” when they really meant, “The government isn’t going to tell me what I can’t do.” Others approved church closings because they didn’t mind missing church or because it gave them an excuse to call conservatives heartless or stupid.

Aontú’s a revealing exception because it’s calling for the opening of churches from the left. It’s both a lefty and a pro-life party. Its slogan is: “Life – unity – economic justice.” Aontú is a small party, so far. It has only one member in the Irish parliament, the founder, Peadar Tóibín, but a growing membership.

There’s nothing quite like it anywhere else as far as I know. The closest thing in America is the group Democrats for Life, which perches uneasily on the edge of the Democratic party. It represents many members but almost no one in the leadership.

It’s not affected by American ideas of “freedom.” It has a high view of the common good and supports government action to protect it. And still the party presses for the opening of churches for Easter. (And by extension synagogues and mosques for their worship.)

In America, most states are removing restrictions. In most places, churches are free to reopen by following social distancing rules. That’s very good. But as we have seen for the last year, many remove restrictions on businesses and even theatres before they remove them on churches. If cases surge again, or another virus has the same effect as Covid-19, we can expect churches to be among the first institutions repressed.

A Human Right and Essential Element

Aontú makes two arguments for reopening the churches. First, “Religious practice is a human right according to the UN Declaration of Human Rights.” (The Declaration says that “Everyone has the right … either alone or in community with others and in public or private, to manifest his religion or belief in teaching, practice, worship and observance.”)

Second, religion “is an essential element in the lives of many many people in Ireland. Religious practice plays a significant roll in the wellbeing of many people in these dark times.”

Every closing is a loss. Closing theaters takes away an art that communities enjoy and does what art does to help us see and think better. Closing restaurants — especially the small diners and pubs with their regulars — takes away a place people gather to make and sustain friendships.

Health officials, looking only at the virus, rarely seemed to see the costs of their policies to the common good. Not least to public health, especially mental health.

The Church Must Push Back

But closing churches causes a special kind of loss. It takes away the major way people practice their relation to the whole of reality. It tells them what the universe is like and who they are, and why. It helps them become who they should be, as part of a community to which they feel special bonds.

At the simplest level, religion gives people reason to be better than they want to be. Of course there are lunatic and cruel versions, as there are of anything. Libertarians and Marxists have their own versions of the Westboro Baptist Church.

All this requires being together in church. This is obviously true for Catholics and others in sacramental traditions. Being at Mass can’t be replaced by personal prayer or watching Mass on the web, or safely replaced for very long. We have the Mass for a reason.

That’s true for every other Christian as well. The book of Hebrews tells us not to neglect gathering together, because the Christian life requires being together. The community matters. Common worship matters. All the things that grow from being together, especially ministries, matter.

One may not believe in any religion, but still should recognize religion’s social importance. A secular state doesn’t see that at all. It treats religion as a leisure activity. It sees church-going as a purely private matter, to which you have no more right than to your book group or your poker night. The state cares more about things it can see and measure, like the economy.

The state has the authority to restrict public gatherings. The authority isn’t absolute, however. It’s even less absolute in America than in other countries, because we have the First Amendment. The amendment itself assumes that religion does good, and does a good only it can do. It assumes leaving it alone as much as possible is in the nation’s best interest.

When the state restricts religious practice too much, or for too long, or unfairly treats other institutions better than it does religious bodies, the churches should push back. Religion offers a good that can’t be repressed as if it were something indifferent. And push back not just for ourselves, but for the common good.

David Mills is a senior editor of The Stream. After teaching writing in a seminary, he has been editor of Touchstone and the executive editor of First Things. He writes the monthly “Last Things” column for the New Oxford Review and a “Chapter House” column for The Catholic Herald.