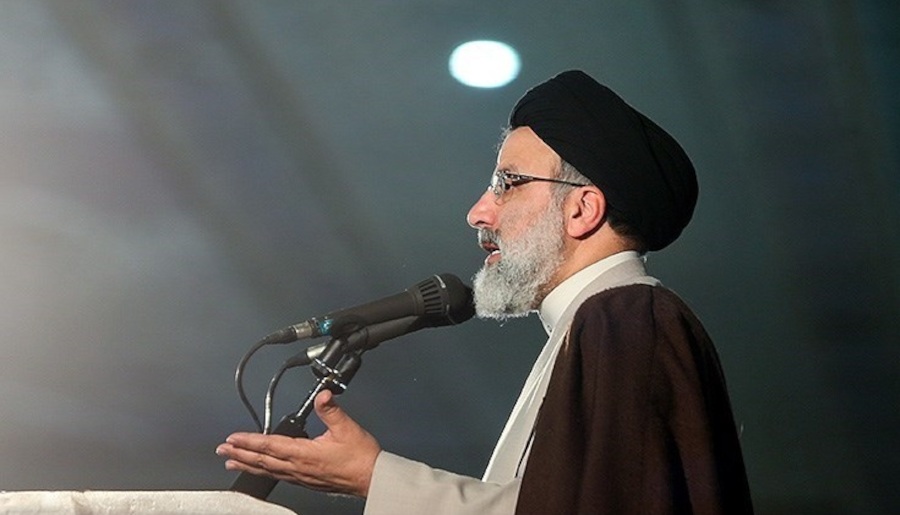 For the largest branch of Shi`i Islam, Muhammad’s 12th descendant disappeared over 1100 years ago. But he didn’t die, and will return as al-Mahdi to bring the world to Islam. The “divinely-guided one.” The Islamic Republic of Iran, which is majority Twelver Shi`i, claims to be the Mahdist state in microcosm. A type, if you will, of the global caliphate which Allah will empower this Mahdi to forge. Now Iran will have a President who foreshadows eschatological leadership, as well: Ebrahim Raisi. He functions, in effect, as the Mahdi’s “Mini-Me.”

Iran’s Government: Waiting on the Mahdi

Some would say this is actually the role of Iran’s Supreme Leader, Ayatollah Ali Khameini. Iran’s political system is one of vilayet-i faqih, “government of the theologians,” set up by Ayatollah Ruhollah Khomeini. The Iranian Constitution puts the “clerics” in charge until the Mahdi appears. (Per Article 5 of that country’s constitution.) Which means forever, since the Mahdi is a pious fiction. So what is this End Times figure expected to do?

Many (both Muslim and non-Muslim) think that the Mahdi is like Jesus. In fact, many media accounts of Twelver Shi`ism describe him as “deliverer” or even “savior.” Ten years ago Iranian President Mahmud Ahmadinejad presented such a take at the United Nations General Assembly. The “perfect human being” will return to build a “bright future.” He will “come alongside Jesus Christ to lead freedom and justice lovers to eradicate tyranny and discrimination.” (Remember, in Islam Jesus will return as a Muslim. An angry one.) The 12th Imam al-Mahdi will also “promote knowledge, peace, justice, freedom and love.” (Think an addled, post-medical-procedure Montgomery Burns.)

But Ahmadinejad was trained in transportation engineering. Not theology. Is there a more accurate and realistic view of Twelver Shi`ism’s once and future leader? Yes. Let’s turn to an actual ayatollah. Najmuddin Tabasi has written books on the topic, such as this one outlining the global government the Mahdi will allegedly establish. If you don’t want to support ayatollah authors on Amazon, just peruse instead this shorter precis. It’s entitled “Imam al-Mahdi’s Mode of Conduct with Enemies.”

A better title might be “No Quarter.” Tabasi, drawing on hadiths (both Sunni and Shi`i), portrays the Mahdi as a Muslim Thanos. Except with fewer scruples. Anyone trying to hinder him “will deserve nothing but annihilation at the powerful hands of the Mahdi.” Islam’s founder Muhammad (allegedly) “used to deal with enemies leniently, gently and kindly.” But Muhammad’s ultimate successor “will adopt the policy of killing.” The Mahdi will have nothing to offer but “blood, sweating … and sleeping in the saddle.” Even deserters and the wounded will not be spared. Anyone who refuses to convert to Islam will be beheaded. Especially Arabs (no doubt for being Sunnis). Of course, the Mahdi will wage special war against the Jews, who will have allied with the Dajjal. (The Deceiver, Islam’s antichrist.) In fact, Twelver Shi`ism’s Terminator “will kill so many people that the flowing blood will be as high as the foreleg [of a horse].”

Now, Supreme Leader Khameini is dictatorial and callous. He has denied the Holocaust. Allowed imprisonment of critics. Continued persecution of Baha’is. Khameini even may have ordered the killings of dissident Iranians abroad. But those are Mahdi Lite operations. Ebrahim Raisi makes Khameini look like St. Francis. According to the IRI’s major opposition group, he is a very bad hombre. Even Leftist Amnesty International accuses Raisi of crimes against humanity. Why?

Why Iran’s New President is a Very Bad Hombre

Raisi joined the Islamic Revolution at age 18, in 1979. He had already undergone some Shi`i “seminary” training. (Islam allows such even before college, even for elementary school-aged children.) Within a year he was a “judge,” interrogating prisoners. Then he was promoted to prosecutor for the Revolution. In 1988 Supreme Leader Khomeini created a “Death Commission.” Its job? To execute any and all opponents of the regime. Raisi was an enthusiastic leader of this bloody tribunal. As many as 30,000 political prisoners were killed. Many, if not most, members of Mujahidin-e Khalq, the main resistance movement.

By 1989 Raisi was one of two officials with the power to order Islamic floggings and amputations, as well as executions. Khomeini also appointed him to increasingly higher posts. As both judge and jury, in effect. Raisi lacked the rank of ayatollah. But his cunning and brutality more than made up for it.

In 2015 Khameini put him in charge of Astan-e Qods-e Razavi. Originally a lucrative shrine-based-charitable organization, it had grown into a major economic power. And a means of financing Iran’s support for terrorism, alongside the Revolutionary Guards. So Raisi became a major player in both domestic and foreign terror.

Then in 2018, Khameini appointed him head of Iran’s Judiciary. Raisi was also allowed (or ordered) to teach classes in a Qom seminary. Despite his lacking the credentials to do so. The current Supreme Leader certainly appears to be making Raisi his preferred successor. Although, like US Supreme Court Justices, dying wishes aren’t always honored.

Trump Harbored No Illusions About Raisi

The Trump Administration knew of Raisi’s reputation and rise. In late 2019, he sanctioned Raisi and eight other IRI officials. Trump also sanctioned AQR before leaving office. Those actions, along with leaving the farcical “Iran deal,” cause the Left to blame our former POTUS for Iran’s intransigence. Indeed, for Raisi’s election, as CNN did. CNN “staffers” who write such articles should try reading books on Iran. Perhaps even visiting there. One of the requirements for the Iranian Presidency is “convinced belief in the fundamental principles of the Islamic Republic of Iran and the official madhhab of the country.” (Madhhab is the Twelver Shi`i school of jurisprudence.)

I pointed out when Rouhani was (s)elected that only a staunch supporter of the regime can become President. This includes theology. In particular that the Twelfth Imam will come and take over the government someday. The Western (mainly journalistic) analytical lens of “hardliner” and “moderate” in Iran is actually useless. Every Iranian leading official is a “hardliner” in terms of belief. Otherwise he wouldn’t be a top politician.

The Best Bet for Next Supreme Leader of Iran

Khameini is 82 and looking forward to visiting the huris in the next life. (Although I suspect his conjugal visits will occur in a much hotter place than he expects.) He, too, was (s)elected President before becoming Supreme Leader. And like Raisi, Khameini never achieved ayatollah rank. Which was why the constitution was amended to remove that qualification. Clearly Khameini is grooming Ebrahim Raisi to follow the same path. And what better leader, from the ayatollahs’ viewpoint? Raisi’s beliefs and brutality most resemble that branch of Islam’s most revered figure. He’s perfect for the job.