INTERVIEW: The Gathering Storm: What Christians Need to Know About What’s Ahead 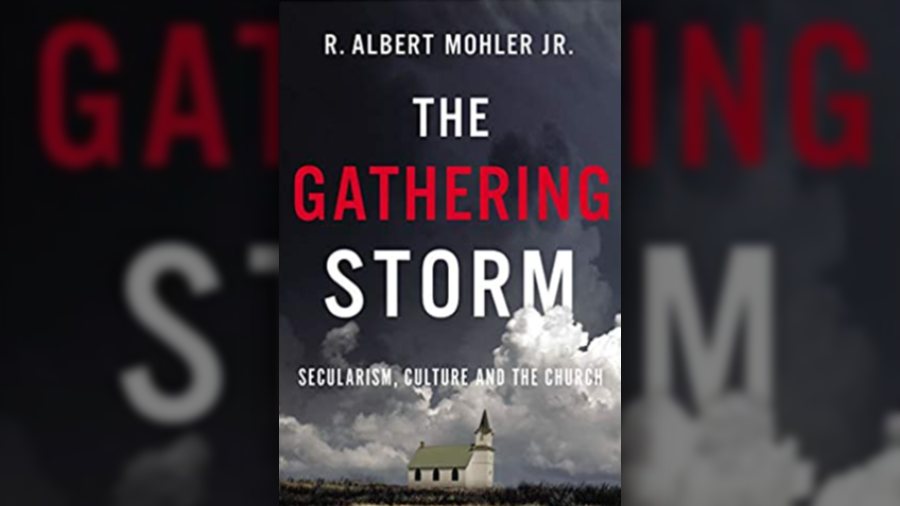 Recently, Dr. R. Albert Mohler, Jr., spoke with The Stream’s Nancy Flory to discuss his new book, The Gathering Storm: Secularism, Culture, and the Church. Mohler is the president of the Southern Baptist Theological Seminary in Louisville, Kentucky. He also hosts two podcasts: The Briefing and Thinking in Public. He has authored many books, including The Apostle’s Creed, We Cannot Be Silent, and The Prayer That Turns the World Upside Down. He has appeared in many publications and television shows.

Why did you write the book, The Gathering Storm: Secularism, Culture, and the Church? Why now?

With everything happening around us, I couldn’t help thinking over and over again of Winston Churchill’s first volume in his great history of World War II, and that was entitled The Gathering Storm. I borrowed that title from Churchill because he was saying that if you were alive during the 1930s, you should have seen these storm clouds gathering and you should have understood what they meant. So that’s what I’ve tried to help Christians in this generation to do, is to understand what all these storm clouds mean, because it is a gathering storm that we as Christians face.

You talk about a secularization process going on. What do Christians need to know about living in a secularized postmodern society?

That changes the whole terrain of things around us. That’s why we’re seeing not only a revolution in sexuality, but even in gender. You can’t do that unless you just kind of intellectually kill off the Creator. That’s what we’re looking at.

Then you understand why we have threats to religious liberty because people who do believe in a divine creator and do believe in God-given laws and principles by which we should live well, we’re now the people who are out of step with reality. So why should society allow us to have access to the airwaves? Why should we be allowed admission to the colleges and universities? Why should our schools be able to operate by a biblical morality? We’re looking at very real challenges.

And those challenges are also something that the church is dealing with. Can you talk a bit about what’s happening with the church right now?

The church finds itself in a very different position. It used to be the people, for instance, gain social capital by coming to attend our churches. That isn’t why we wanted them to come, but it’s true that they were thought of as good people because they went to church. Now people who go to gospel-minded churches are considered by some of their coworkers as outlaws. We won’t get with the program when it comes to the LGBTQ revolution or any number of things.

I think the other thing is, is that a lot of Christian churches in the United States kind of just thought that people thought they ought to go to church. And so we tried to be the kind of church where people who thought they ought to go to church would go. Now we’re living in an age in which millions of Americans don’t even think about going to church. To be honest, our job is just a lot harder than it used to be even just to get people in the door.

Considering all these storms that you talked about in your book, what is the Christian’s responsibility? What can we do?

The first thing is, that we know that the church is not going to be defeated by the world. Jesus Christ himself said in Matthew 16, “upon this rock, I will build my church and the Gates of hell shall not prevail against it.” But we also know that there are places and times where the church has been in retreat.

Parents have got to overcome bad messaging with the Word of God, the Holy Scriptures with encouragement, discipleship, raising our children in the nurture and admonition of the Lord, because we’ve got to get them ready for battle. And they’re going to be in that battle for the rest of their lives.

So, we just need to make sure we’re raising courageous Christians. It’s going to take courage. Now we want Christians to be nice and kind and joyful. We want them to be convictional, evangelistic, but they’re going to have to be courageous. Just think how much courage it’s going to take for an 18-year-old young Christian to arrive on a major college or university campus and stay Christian in worldview and in commitment. We didn’t tell young people in the past they were going to have to be courageous or they’re going to be run over by the world. That’s the way it is right now.

And look, churches have to watch their preaching at the gospel. Preaching at the Bible is just not going to work. You’re going to have to preach the word in season and out of season, people who don’t know anything about the Bible are gonna have to be grounded in the Scripture. And it’s just no time for church as entertainment. That’s for sure. People can get plenty of entertainment elsewhere, what they need from the church is the Gospel, the Word of God.

You mentioned raising Christians. What are some concerns that you have for the next generation looking at all of this?

I think one thing that Christians — and I speak of this as parents and older Christians — don’t think about enough is the fact that young people in the United States, and that includes our own children and grandchildren, are actually surrounded by constant messaging that is in opposition to the Gospel. When you have young children in your home, you can help to protect them from that. But as soon as they have contact with that external world, they’re receiving just an incredible avalanche of messaging that’s contrary to the Gospel.

My parents didn’t have to worry about that. When I went to Boy Scouts, I was hearing the same worldview as when I was at home. When I went out into the community, when I went to a neighbor, and played in a neighbor’s house, they held to the same morality.

My parents didn’t have to worry about the fact that I was going to run into a same-sex couple, that they didn’t exist [or weren’t] legally recognized when I was a kid. And my parents could send me to school pretty confident in the public schools, that I wasn’t going to hear anything contrary to what they taught, but that’s a lifetime ago. And parents just have to understand that we can’t overcome bad messaging with no messaging. We’ve got to overcome bad messaging with the Word of God, the Holy Scriptures with encouragement, discipleship, raising our children in the nurture and admonition of the Lord, because we’ve got to get them ready for battle. And they’re going to be in that battle for the rest of their lives.

You said we don’t need a political movement. We need a theological protest. What does that look like?

I don’t believe that Christians should retreat from politics. We can win at politics, which is important, but it’s never enough. It doesn’t deliver the Kingdom of Christ and that’s [what] the Gospel does. And so we’ve got to be active in politics. We have to be active in the culture, but we have to build up the church because at the end of the day, the church is the visible Kingdom of Christ.

We have, as Paul talked about, a dual citizenship in this nation. Yes. But ultimately in the people of God, the Kingdom of Christ. And so we’ve got to build up the church to constantly think of itself as the Kingdom of Christ on earth, the place where the Gospel, where Christ reigns Supreme and the Gospel is our point, our hope.

What do you want people to be talking about after they’ve read your book?

I hope they will be able to connect a lot of dots and say, okay, the abortion issue, the sexual revolution, I can connect these things. What’s going on on the college campus, what I’m hearing from politicians, I can connect those dots now because we as Christians know these aren’t accidents. This is all part of a great collision of worldviews.

Then I hope Christians will say, ‘You know, I’m going to have to think biblically, or I’m going to think just like the world.’ That’s why we need the Bible taught in churches. That’s why we need Christians reading the Bible. And we have to understand the Christian worldview is not only true. It’s life-transforming. Then again, we just have to say, ‘Okay, we’re to be salt and light in the world.’ So it’s not enough that we know these things and treasure these truths. We’ve got to contend for them right out in public where it’s going to cost us something.

Is there anything that I haven’t asked you that you think I need to know?

The one thing an author hopes for is people who read the book and are helped by it. And that’s what I pray for is that Christians reading this book will say ‘I think I can be a better church member because of this. I think I’ll be a better parent.’ That’s what makes me happy.