Interview: Mollie Hemingway On the 2020 Election and Her Best-Seller, Rigged

What you're not hearing from the J6 hearings about the 2020 election. 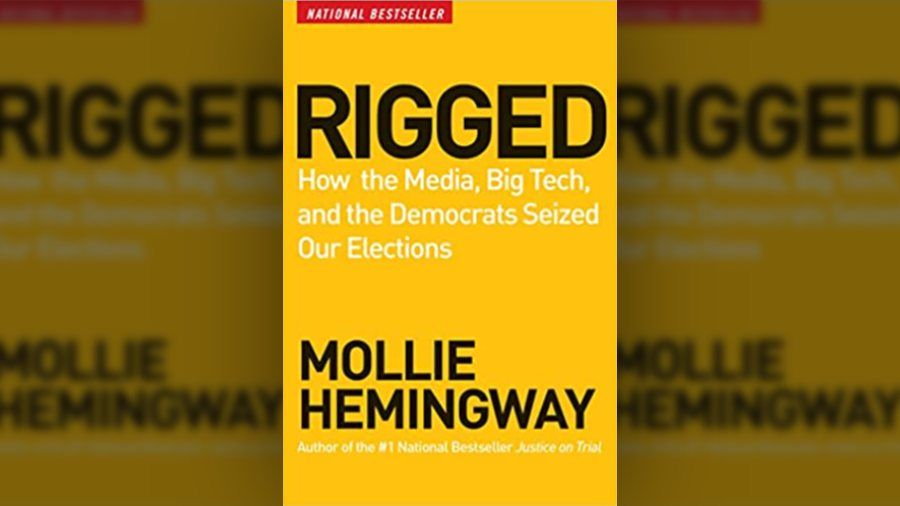 Mollie Hemingway, author, columnist, political commentator and the editor-in-chief of The Federalist, recently spoke with Stream contributor Alex Chediak about her newest book, Rigged. Rigged is about how the election was controlled to allow Biden to win the presidency of the United States. Hemingway calls the effort a “coordinated attack on the election system.” Hemingway and Chediak discuss the 2020 Election, what election officials should do going forward and what the American people can do to improve the security of elections. Here’s what Hemingway had to say.

CHEDIAK: Mollie, thanks so much for writing a fantastic book, Rigged. I had the pleasure of reviewing it for Stream readers last Fall.  I appreciate your willingness to do this interview.

CHEDIAK:  What prompted you to write this book?

HEMINGWAY: After the 2020 election, discussion about the election was verboten. Being told that you couldn’t talk about what was clearly the weirdest election in recent history bothered me. I knew that if I wanted to find out what happened, I’d have to research it myself. I’m thrilled that I did. Everyone should care much more about election integrity and the first step is simply knowing more about our system and why it has to be kept secure.

CHEDIAK:  Your book’s title is Rigged. Not Stolen. Is there a distinction in your mind between these two terms? How much of what transpired in the 2020 presidential election was unethical as opposed to illegal?

HEMINGWAY: Usually when you write a book, the title you imagine is not the one publishers end up using. But in my mind, this book was always titled “Rigged.” I did see an important distinction between the two terms. Rigging suggests a coordinated and widespread effort to control the election system and that was what I was writing about. At first my concerns were about the outsize role played in our elections by our corrupt propaganda press and our powerful tech oligarchs. They clearly rig the game for preferred outcomes.

But I also saw how the widespread and coordinated effort to decrease the security of our elections was also a way to rig them. I found it fascinating that Marc Elias, the same man behind the Democrats’ 2016 lie that Trump stole the election by colluding with Russia, also ran the coordinated effort to change hundreds of laws and processes to weaken election integrity in 2020.

CHEDIAK: Is it true that only state legislatures can change statewide election laws? But in 2020, some states updated their election laws in other ways, right? Like through a Governor’s executive order or through their state’s Supreme Court. If so, these seem like indisputable violations. Why was Trump’s legal team unable to make more headway? When I tell my Democrat friends about your book, their dismissal is, “This was all litigated — unsuccessfully. Trump’s lawyers (e.g., Rudy Giuliani, Sidney Powell) are now in trouble for lying.”

HEMINGWAY: Yes, only legislatures are supposed to change election laws, but one of the most common ways that election laws and processes were changed was through a strategy called “sue and settle.” That’s where Democrat groups would sue a friendly state official and the state official would agree to change their laws voluntarily.

In any case, I’m fairly critical of Trump’s latter days legal effort myself, telling a story in the book about how Guiliani took over a promising case in Pennsylvania and destroyed it.

But it’s not true that that late-stage effort bears the full blame for the failure to fight the coordinated attack on the election system. The Republican National Committee is doing a much better job of being on top of election integrity in this 2022 cycle but they were actually prohibited by court order from playing a role for nearly forty years — I tell the absolutely insane story behind that in my book. It literally took a Carter-appointed judge finally dying to free the RNC from this onerous decree. The RNC and Trump’s legal team worked fairly well together in the months leading up to the election, and secured some important victories, but they started too late and they were simply outgunned by the billionaire-backed efforts that had been going on for decades. Trump knew the mail-in ballot system would be a mess, but he didn’t devote enough resources to fighting it earlier.

“If a Republican had done this, everyone involved would be in prison.”

The most egregious failures, however, came from the courts themselves. When people brought concerns about shoddy election administration to the courts prior to the election, they were frequently told to wait to litigate until after harm could be shown. Then, when the election occurred, courts would tell them that it was too late to bring their cases. The Pennsylvania and Wisconsin Supreme Courts in particular disgraced themselves by not caring more about massive integrity problems in their states.

CHEDIAK: Regarding Mark Zuckerberg’s donations funneled through the Center for Tech and Civic Life, how do you respond to the argument “The GOP does the same kind of thing”? What was unprecedented about Zuckerberg’s activity?

HEMINGWAY: Not only does the GOP not do “the same kind of thing,” literally no one in history even imagined such a thing was possible until 2020. Zuckerberg funded nearly $450 million dollars through two left-wing groups — Center for Tech and Civic Life and Center for Election Innovation and Research — in the name of assisting vote administration with COVID. In fact, only one percent of the funds went to that, with the remaining helped run Get Out The Vote efforts in the Democrat areas of swing states. This included ballot design, voter communications, voter registration, ballot curing, and every other step of the election process. By bolstering Democrat areas and Democrat-favored voting methods, the funds had an amazing partisan impact. Zuckerberg’s groups focused their money wisely, with 10 percent going to Georgia alone. The result was not just flipping the state six points toward Democrats, it flipped the Senate to Democrat control as well.

CHEDIAK: On the New York Post’s Hunter Biden laptop story, some say it had to be initially suppressed because it appeared to be hacked material. The argument is that social media giants have an obligation to censor potentially hacked material. Is it true that within several days in mid-October, these companies reversed themselves and permitted the story to circulate? Weren’t they just following protocols?

HEMINGWAY: It is true that some social media companies developed a cover story for their propaganda efforts and that cover story was that they banned any dissemination of hacked materials. But the material on the Hunter Biden was not hacked and material that was hacked, for example, Donald Trump’s tax records, was allowed to fly with wild abandon. So the cover story was a clear lie.

To help perpetuate the lie, corrupt intelligence officials and a reporter who regularly regurgitated their false claim that Trump stole the 2016 election, created a story that the material was Russian disinformation. That lie was also told by Joe Biden, who had to know it was false since his own communications were on the computer. Social media companies deplatformed the New York Post to suppress the spread of the story about the Biden family corruption. It was the worst assault on the election in memory.

CHEDIAK: What should elected officials do in response to your findings? Isn’t there’s a danger, politically, in litigating the past, since elections are about the future? The Virginia gubernatorial race, for example, was won by a rookie who scarcely mentioned Trump.

Because of the facts uncovered by curious citizens about Zuckerberg, for example, many states have now explicitly banned the private takeover of government election systems. And by many states, I mean Arizona, Arkansas, Florida, Georgia, Idaho, Kansas, Kentucky, Mississippi, Nebraska, North Dakota, Ohio, Oklahoma, South Dakota, Tennessee, Texas, Virginia and West Virginia. Having said that, people who care about election integrity must be focused on future attacks on the system and how they differ from past attacks.

It is not true that Virginia Governor Glenn Youngkin “scarcely mentioned” Trump. In fact, his refusal to disavow him as so many establishment Republicans have done was key to him keeping Republican support even as he expanded his coalition. It is true, however, that Virginia voters began to be focused on election integrity. While a court threw out the challenge, election observers in Fairfax County were the ones to sound the alarm about the liberal county accepting ballots that did not have proper Voter ID. Many voters around the state began to take an interest in monitoring the expansive early and mail-in voting in the state.

CHEDIAK: Is there something that most surprised you in your investigation?

HEMINGWAY: I was shocked by how coordinated the Zuckerberg takeover of election administration was. I couldn’t believe how these far left groups staffed by some of the most partisan actors I’ve encountered had burrowed into our election system. If a Republican had done this, everyone involved would be in prison.

CHEDIAK: What can regular Americans do to improve the security of elections?

HEMINGWAY: First off, don’t despair. Our entire history is one of working to improve elections. We moved to a secret ballot and a single day of voting for president because of controversy in the presidential elections up to 1844. We had to deal with Democrats’ coordinated effort to disenfranchise an entire race of people in the South. The most important thing to do is to get acquainted with the laws and processes in your region, and then sign up to observe whether they’re being properly followed. Because we are now moving back to an extended voting season, that means much more oversight of the process is needed. Volunteer to help out.

CHEDIAK: Thanks again, Mollie. It’s an honor to interact with you. If you haven’t already done so, check out the book itself or my review from last Fall.