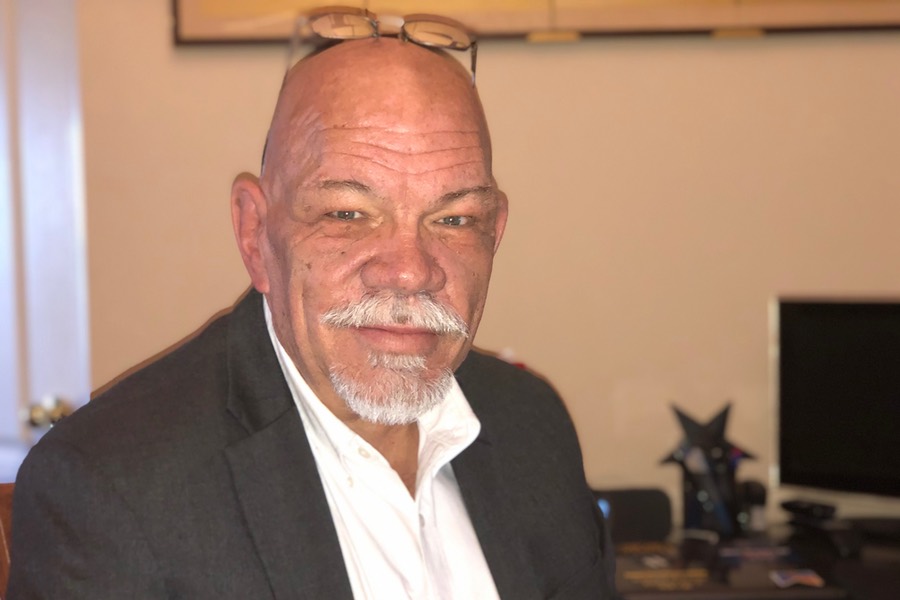 I spent a couple hours last week with Ken Armstrong, candidate for the Libertarian Party’s nominee for U.S. president, in the Monroe, Ohio home of Bob and Helen Gilson. My interview with Helen as chair of the Libertarians’ Christian Caucus appeared earlier on The Stream.

In our conversation Armstrong freely expressed his strong commitment to Christian belief and values. The following is a slightly edited transcript of our interview.

“Return to the Constitution”

The Stream: Let’s go straight to the heart of the question. You want to be president. What would be the reason we, the United States would benefit from you being our president?

Ken Armstrong: Right now we’re in a desperate situation with the economy and the government taking increasing control of people’s lives. And I believe we need a president who would return to the Constitution.

The Stream: Well, there’s a straight answer for you! [Ken laughs.] So — “return to the Constitution.” That implies you’re saying we haven’t been following the Constitution. Tell me more about that.

Ken Armstrong: We’ve been following the structures and the basic Constitution, but the Bill of Rights, and the amendments have been just really trashed for 60 years now, and particularly for the last dozen years or so.

The Stream: On your website you mention particularly the 9th and 10th amendments.

Ken Armstrong: Yes. The 9th amendment, of course, says that the people have rights that are not even listed in the Constitution. They’re what we refer to as penumbral rights, they’re just in the air that we breathe, people have rights. But the 10th amendment says the federal government only has the rights that are specifically enumerated in the Constitution. And what’s happened is the federal government has taken two clauses, the Commerce clause and the General Welfare clause, and they use those to pretty much say, well, everything is either commerce or general welfare so we can do everything.

The Stream: That’s a nice open door for whatever you want to decide to do.

The Stream: And you’d love to see us return to that constitutional backing. Would you call yourself an originalist?

Ken Armstrong: I’m a pretty strict constructionist. I have on my Kindle the Federalist Papers and I refer to them to see what the originators of the Constitution had in mind, sure.

The Stream: So, what’s your platform, what specific issues other than the general idea, let’s return to the Constitution what would you like to see happen through your leadership?

Ken Armstrong: There are three key points. But the first thing we have to do is we have to get the economy under control. We are blowing through a deficit of $3 billion per day. I was talking with somebody this morning and we said, “We could make 3,000 millionaires a day on the money that we’re adding to the national debt.
And that is not sustainable. We can’t do that. That is growing faster than the economy is growing. Which means that eventually the economy can’t pay for the debt. And that will be bankruptcy for the country.

The Stream: And your second point?

Ken Armstrong: Our adventurism overseas, the undeclared wars, the Executive Powers act, all those interconnected pieces there, but we have gotten an addiction to just being the big brother and policeman of the world, and thinking that every time anything happens that we don’t like, we have to step in. Not that there aren’t some very legitimate reasons to be watching the bad actors in the world, but we’re not supposed to be the world’s policeman.

The Stream: And the third?

Ken Armstrong: The third is just generally executive control. Too much power has gone to the executive branch that belongs in Congress, and the reason that the powers belong in Congress is pretty simple: Congress is more accountable to the people than any other federal branch of government. Particularly the House of Representatives. When we say Congress, it actually incorporates the House and the Senate. But the House of Representatives is re-elected every two years, 435 members, so it’s sort of the more grass-roots level of government. And that’s where the power is supposed to reside.

The Stream: What about the courts? Would you say there’s too much power there, and could a president do anything about that?

Ken Armstrong: You know, I haven’t talked too much about this, but I could see the need for a constitutional amendment. The framers of the Constitution intended there to be checks and balances, but what happened in the Marbury v. Madison ruling in 1803, the Supreme Court said “we’re the ultimate arbiters of the law of the land.” And they decided that for themselves; it was never decided for them. And nobody has really challenged that. And I think we could use a constitutional amendment that says the Congress can veto a decision of the Supreme Court, Which then puts checks and balances back in place.

The Stream: As a third-party candidate you must obviously be thinking about the challenges to winning a general election. So I wonder if you have any secondary goals, saying, “If we don’t win, I will at least have succeeded if…” (I don’t want to imply you’re saying you’re going for less than the victory.)

Ken Armstrong: Well, I’m shooting for the win, that’s a fact. I’m shooting for the win. I would say, and I say this sort of light-heartedly, I really can’t lose because I’m already not president. You can’t lose something you don’t have. So all I can really do is win. And the winning is opening a conversation about these important issues. But yes, I’m absolutely serious. I know that I’m pushing a huge rock up a hill right now. I’m well aware of that. But it’s not unthinkable. It’s unlikely, but it’s not unthinkable that the third-party candidate could win.

The Stream: And so please tell me, and this is where I could have started, but saved it for later, your background qualifications and family. Tell me something about yourself, please.

Ken Armstrong: Well, I’m not good at bragging on myself. But I’ll brag about my wife, since you said family. Dawn and I are coming up on 20 years of marriage next April. She is the best part of me. God just absolutely blessed me the day she walked into my life, which I can still picture vividly. But aside from that, you can go to my website, armstrong2020.com. I’ve got a resume, I’m not ashamed of it. I’m more qualified than all but one president-elect in the last 40 years.

Ken Armstrong: Government experience, national defense, international relations. I was the U.S. Consul’s representative for the Pelagie Islands, I’ve commanded a NATO base, I’ve been deeply involved in government work with Dr. Koop when he was Surgeon General. Worked with Bush 41 when he was vice-president. So yes, I’ve got a lot of background.

The Stream: Is there any thing I should have asked and didn’t?

Ken Armstrong: No, I really don’t think there is, but thank you.