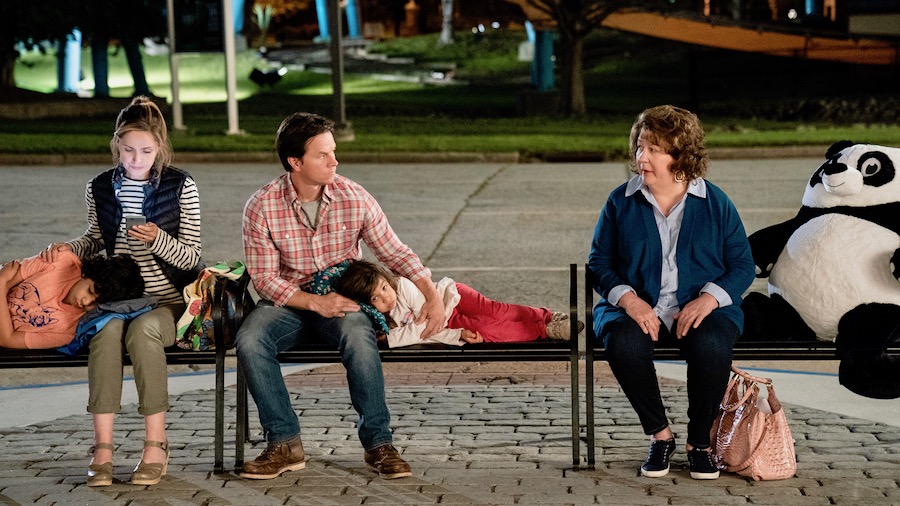 The oldest foster child of Pete (Mark Wahlberg) and Ellie (Rose Byrne) has some explaining to do as Juan (Gustavo Quiroz), Lita (Julianna Gamiz) and Grandma Sandy (Margo Martindale) wait for her return, in the new comedy Instant Family.

Opening in theaters today, Instant Family has had a three-year journey to the big screen. But it really began four years prior to the script idea, when Hollywood director Sean Anders and his wife Beth decided to foster parent three siblings. They ultimately adopted those three kids, in a journey that loosely inspired this comedy.

“I’ve said to a lot of people: If my career has any purpose at all, it really is this movie,” Sean Anders tells The Stream. “That’s how much it means to me.”

The crisis Instant Family addresses is no laughing matter. More than 400,000 children are currently in the U.S. foster care system, with over 100,000 ready to be adopted. Anders and his team interviewed dozens of foster families and worked with adoption experts to get the script right.

Start to finish, laughs abound in this latest from the director of Daddy’s Home. The movie’s mature themes and language also keep it firmly in PG-13 territory. In a phone interview, Anders shares behind-the-scenes stories with star Mark Wahlberg, how adoption advocates sharpened the film and the joy of celebrating his own kids.

Kids in foster care have gone through such trauma. Why tackle this subject matter in a comedy? Sean Anders: Foster care has always been tackled in the context of dramas. A lot of times it’s really difficult, gritty dramas that only focus on the tragedy and trauma of it all. But with my family and other families I met with, there was so much love, joy, laughter and knucklehead situations that we all deal with.

We were determined not to shy away from tragedy and trauma, because that is an important part of the story. Instant Family tells a more complete story that has the negative in there, but focuses on the positive. The best part is getting to share who these kids in the system really are.

How different was writing this movie from your past comedies?

Anders: This movie means more to me than anything I’ve ever done, because the topic is incredibly important. Writing Instant Family was a very different experience from, say, Hot Tub Time Machine. It involved a lot more research and working with different families.

This movie is a big deal because it’s about my own children and experiences. In a way, it was easier because it was so personal and real to me. But, in other ways, it was harder.

The pressure was so much greater to get it right and to try to strike this balance between comedy and drama throughout. That was a difficult but rewarding task.

What did Mark Wahlberg bring to the project when he agreed to star in Instant Family? Anders: When Mark first called me back to agree to be our lead, he told me about some kids he had met that had grown up in foster care. He really connected with those kids because Mark had a tumultuous childhood himself.

There aren’t many people out there who impress Mark Wahlberg. He’s one of those guys who is doing everything all the time — you’ve seen his schedule. He is usually only impressed by people in the military or first responders or, as I learned, foster kids. These kids are surviving in unique, difficult situations. Mark was so passionate and excited as he was talking about them. He is very taken with foster kids, and he jumped right in as a result.

Mark gave a huge amount of legitimacy to a project that was a hard sell to any studio. We want to make this all-audience comedy … about adoption through foster care. And we don’t want to shy away from some of the darker topics around that. It’s hard to imagine that as a big, wide-release movie. But once Mark Wahlberg was behind it, everybody knows he brings cachet to it.

“There aren’t many people out there who impress Mark Wahlberg: the military, first responders or, as I learned, foster kids. These kids are surviving in unique, difficult situations.”

Not only that, but Mark helped us attract other amazing cast members. When people hear Mark’s in it, they want to do movies with him. Then when you’re calling Octavia Spencer, you don’t have to just say, We have this great project. Instead, you can say, Hey, we have this great project — with Mark Wahlberg! Which is pretty helpful.

Memories of Becoming the Anders Family

Are there moments in the film where you see each of your kids represented on-screen?

Anders: Oh, for sure. I’m always really emotionally moved by that first day with the kids. There’s a thing where they come in and have dozens of court bears — that’s a real thing.

In foster care, it’s unfortunately common for kids to only have trash bags to carry all their stuff. Sure enough, that was the case with my kids when they moved in. There’s a moment where Mark calls the kids to dinner. He kisses his wife and the kids are going, Ew, gross! Kiss again. That exact scene played out in my house the first night my kids came home.

There are so many things. Juan reminds me so much of my son Johnny. Every time Juan would apologize or be nervous he was in trouble or wasn’t doing something right, it makes me think of how Johnny was when we first met him.

Foster Youth At the Center

You’ve spoken about a young woman formerly in foster care who consulted on the film. How did her perspective shape the script? Anders: Maraide Green, who was just 18 when we first reached out, helped in so many ways. As one who grew up in foster care, she was so open and honest. She would sit down with me and talk for hours. Then I was able to get on the phone and talk to her mom for hours.

I really got a sense of how she felt and what her trepidations were, and how much she was protecting herself. Even in the process of talking about the movie, I think Maraide made some breakthroughs about her childhood. We both learned a lot, with a profound effect on the script.

When Paramount greenlit the movie, calling Maraide was one of the best phone calls I’ve ever made. I called her and said, Hey, guess what? This movie is actually going to get made. I would really like you to come to Atlanta and be there for it. She just lost her mind, she was so excited.

“Being in the world of foster care, it’s an edgy world. You have to have certain things to tell an honest story.”

Maraide was already script consultant, but we were able to offer more. I told her, We are going to pay you for the consulting. You can come on-set and just do that, hanging around the monitors and we’ll ask you when we need something. But I think you would gain more experience if you came and worked as a production assistant.

So Maraide did both, it was like this Cinderella experience for her on the movie. Working really hard alongside all the young people on the movie as a P.A., everybody loved her. Then she was always there with a smile for Mark, Rose and Isabella when they had questions.

So our audience here at The Stream are folks who probably haven’t seen Hot Tub Time Machine.

Anders: Oh, you don’t know that!

That’s true, people always surprise me. But how would you respond to criticism that the language and situations in Instant Family are a bit edgy?

Anders: From the beginning, we were trying to figure out where the line is. I fully acknowledge the line is different for everyone.

But being in the world of foster care, it’s an edgy world. You have to have certain things to tell an honest story. No matter how conservative people are in their values, anybody who has really been part of this world knows what I’m talking about.

“Adoption advocates have been hunkered down in a foxhole fighting a war for years. Thanks to this movie, for the first time they feel like there might be some reinforcements coming.”

There is a tone to my own family and extended family that is not rated G. Certainly there is a tone to many kids who come out of foster care that is hard to squeeze into PG-13, like we did in Instant Family. It really goes with trying to be as honest as we could.

Your nonprofit partners include Adopt US Kids and the Dave Thomas Foundation for Adoption. When did they join the film and what is their hope for it?

Anders: We called Adopt US Kids and Dave Thomas Foundation while we were still in prep. Originally, we needed some help. I wanted to include the Adopt US Kids website in the movie because that’s where my wife and I went first to learn about foster care. Rather than creating a fake website, we wanted to use the real thing.

They helped us get pictures of kids who had been adopted through foster care. All those photos you see floating around Mark’s head when he’s looking at the website, those are real kids who have been adopted — including my own.

We made things in the movie as authentic as possible. The adoption agency in the movie is called Kinship Center. That’s where we adopted our kids, through an agency in California.  We’ve been in touch with them and a lot of other organizations ever since.

It’s actually become difficult because every nonprofit group that sees the movie is so excited and wants to get involved. I can only be in one city at a time. Paramount has done an incredible job doing screenings for these organizations across the U.S. Recently, I went to a screening that was all for people who work in the adoption field. I was writing an email to the cast that night, trying to express what an exciting reaction it received.

I said, It’s as though adoption advocates have been hunkered down in a foxhole fighting a war for years. Thanks to this movie, for the first time they feel like there might be some reinforcements coming. Finally, a message is going out widely that is positive about foster care.

All of us are so excited about this film. But we’re opening against Fantastic Beasts! So we’ve got work to do.