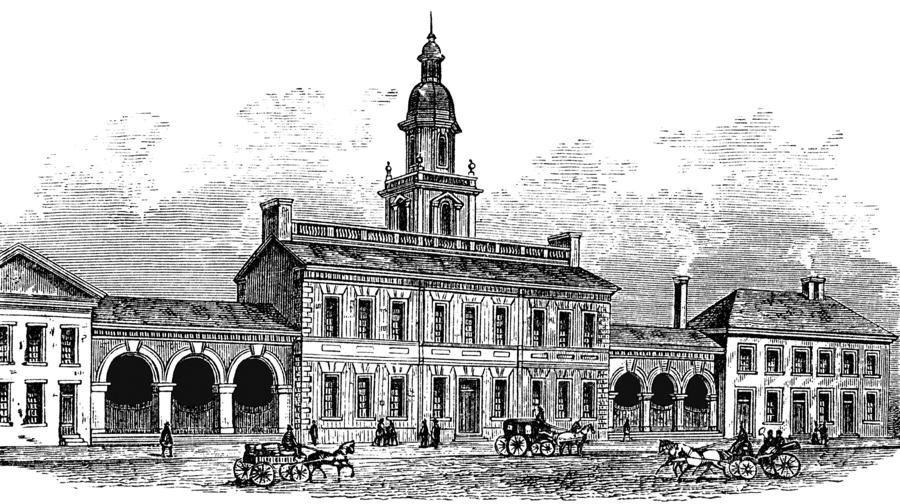 The Pennsylvania State House, which is playing host to the Second Continental Congress. The Congress voted today to declare the united colonies free and independent from England. This "Independence Hall" may well go down in history as site of one of the most significant events in the history of man. Or those inside will be hanged as traitors.

PHILADELPHIA — Independence! The thirteen colonies voted today to declare themselves free and independent of England and King George III, multiple sources have confirmed.

The vote of the Second Continental Congress was unanimous, with New York abstaining.

As Pennsylvania’s Ben Franklin has been quoted saying, “We must hang together or surely we will hang separately.”

No comment yet from British representatives in the colonies, including Franklin’s own son, William, the Loyalist governor of New Jersey.

The Struggle for Independence

The colonies — or as they now will be known, the United States — have been engaged in a war with England since April of 1773. However, calls for independence have been building for decades.

Finally, on June 7, the so-called Lee Resolution for Independence was introduced in the Second Continental Congress by Virginia’s Richard Henry Lee.

Intense debate raged for weeks, including a fierce argument with southern states over slavery. The slavery issue nearly derailed the vote, but the northern states relented. The southern states returned to the table, South Carolina reversed its Nay vote on Independence. The resolution then passed. A nation was born.

A Declaration to Explain Independence

Voting for independence is merely the first step. The Continental Congress is determined to explain to the world why independence from the Crown is both necessary and just.

To that end, the quiet young Virginian Thomas Jefferson has been crafting a Declaration. Delegates have been publicly tightlipped on details of Jefferson’s “Declaration of Independence.”

However, behind the scenes, delegates have been marveling at the majesty of Jefferson’s ideas, and poetry of his prose.

Rather than simply gripe about grievances with King George III, or attack England with revolutionary fervor, Jefferson overturns the very nature of government.

Rights are not granted by kings or men. Rights come from the King of the universe. And they belong to everyone. Every single one.

And from it follows the most shocking, provocative claim: “all men are created equal.”

Jefferson allegedly writes, “We hold these truths to be self-evident, that all men are created equal, that they are endowed by their Creator with certain unalienable rights, that among these are Life, Liberty and the pursuit of Happiness.”

That to secure these rights, Governments are instituted among Men, deriving their just powers from the consent of the governed, That whenever any Form of Government becomes destructive of these ends, it is the Right of the People to alter or to abolish it, and to institute new Government, laying its foundation on such principles and organizing its powers in such form, as to them shall seem most likely to effect their Safety and Happiness.

Such words would not just change 13 colonies into a country. They could change civilization.

All Men are Created Equal?

If true that such a phrase is contained in this Independence declaration, the success or failure of the American Revolution takes on a much greater significance. What are the political and social implications worldwide of asserting “all men are created equal” endowed by their Creator with rights?

Jefferson himself is a slave owner, as is General Washington. How can this new nation declare all men equal and maintain the institution of slavery?

If this is to be a founding principle of these United States, this Declaration not only knocks away the shackles bounding us to England, it makes inevitable the unshackling of men from the cruel bondage of slavery.

But such a debate can wait until the actual Declaration is approved and made public. That is expected to come two days from now, on July 4th.

In the meantime, preparations are underway to celebrate the colonies’ Independence.

Today’s vote means victory and vindication for John Adams. The pugnacious, irritable and irritating lawyer from Massachusetts has long led the Independence fight.

After today’s historic vote, a gleeful Adams said, “The Second Day of July 1776, will be the most memorable Epocha, in the History of America.”

He’s even describing the type of party he sees in America’s future:

I am apt to believe that [Independence Day] will be celebrated, by succeeding Generations, as the great anniversary Festival. It ought to be commemorated, as the Day of Deliverance by solemn Acts of Devotion to God Almighty. It ought to be solemnized with Pomp and Parade, with shews, Games, Sports, Guns, Bells, Bonfires and Illuminations from one End of this Continent to the other from this Time forward forever more.

If John Adams’ prediction holds up and God’s hand remains on these United States, this new nation will be commemorating July 2nd for centuries to come.

And most importantly, the God-given right of all to “Life, Liberty and the pursuit of Happiness.”