In Warsaw, Trump Provokes the Left by Defending Our Civilization 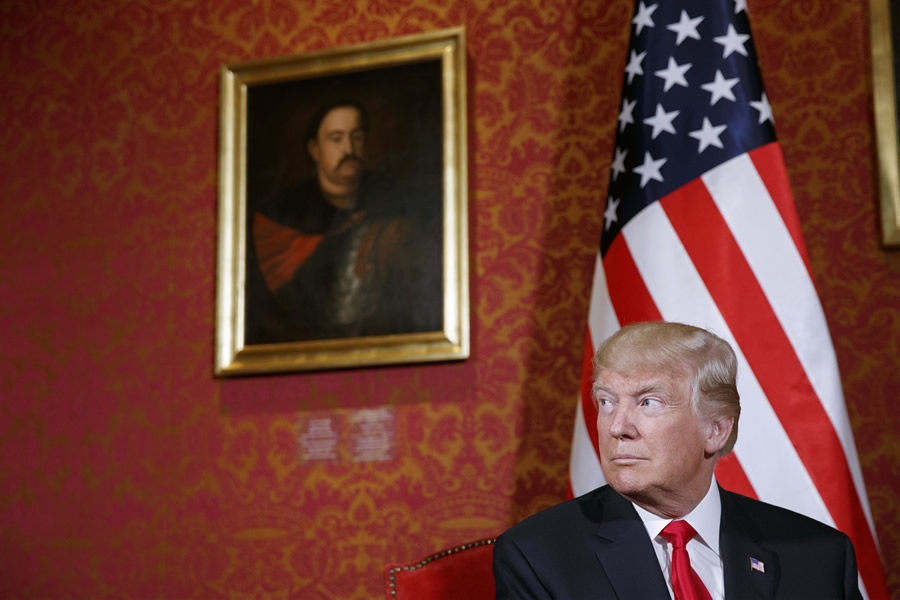 Yesterday I argued that President Trump’s more lowbrow media antics, while far from presidential, might in fact prove Providential. The left has trashed every convention of  objectivity and decency. The left’s media icons call for revolutionary “resistance.” They talk of blowing up the White House. They stage plays where the president gets assassinated. They hold up images of his bloody severed head.

Provoke a Leftist: Tell the Truth

But Trump provokes leftists to out themselves even when he’s being letter-perfect presidential. As he was in his speech in Warsaw yesterday.

The speech was powerful, appropriate, and moving. Trump offered it to a Polish government that is closely aligned to his own: It rejects mass immigration of unassimilable Muslims. It advances protection for unborn children. It’s unabashedly nationalist — in the teeth of a European Union that wants to dissolve its nation’s governments and replace their people with strangers. What’s more, Poland’s a place where moderate nationalism never merited a bad name. Defending the Polish nation has always been a project aligned with democratic values and Christian faith: No neopagan nonsense or racialist fantasies here.

The Miracle of the Vistula

So what better place for Trump to make common cause with like-minded people? Here are a few key passages from his remarks:

For two centuries, Poland suffered constant and brutal attacks. But while Poland could be invaded and occupied, and its borders even erased from the map, it could never be erased from history or from your hearts. In those dark days, you have lost your land but you never lost your pride.

So it is with true admiration that I can say today, that from the farms and villages of your countryside to the cathedrals and squares of your great cities, Poland lives, Poland prospers, and Poland prevails.

Despite every effort to transform you, oppress you, or destroy you, you endured and overcame. You are the proud nation of Copernicus — think of that —  — Chopin, Saint John Paul II. Poland is a land of great heroes.  And you are a people who know the true value of what you defend.

All that was perfectly fitting, uplifting, and true. Trump cited a miracle which too few Americans even know about: “In 1920, in the Miracle of Vistula, Poland stopped the Soviet army bent on European conquest.” Indeed. Had it not been for the outnumbered, outgunned Polish Army, Trotsky’s conquering Bolsheviks would surely have swept through a shattered, divided Germany. We might have seen an Iron Curtain descend on Europe in 1920.

My favorite fact about this battle: It took place on a feast day of the Blessed Virgin Mary. Thousands of Polish soldiers saw an image of her appear over the battlefield, spurring them on to defeat the atheist invaders.

Through four decades of communist rule, Poland and the other captive nations of Europe endured a brutal campaign to demolish freedom, your faith, your laws, your history, your identity — indeed the very essence of your culture and your humanity. Yet, through it all, you never lost that spirit.  Your oppressors tried to break you, but Poland could not be broken.

And when the day came on June 2nd, 1979, and one million Poles gathered around Victory Square for their very first mass with their Polish Pope, that day, every communist in Warsaw must have known that their oppressive system would soon come crashing down.   They must have known it at the exact moment during Pope John Paul II’s sermon when a million Polish men, women, and children suddenly raised their voices in a single prayer. A million Polish people did not ask for wealth. They did not ask for privilege. Instead, one million Poles sang three simple words: “We Want God.”

Can I just stop here and say, “Wow”? In a Europe where the EU Constitution would not even allow a mention of the role Christian faith played in its culture, these words need to be said. We must throw them back in the face of the secularists and globalists who want to erase both that faith and its culture. They want to replace them with empty utilitarianism, of the kind that reigns in the Netherlands, Belgium, and Germany. There life begins with the “choice” about whether a baby is wanted and (hence) human, or unwanted, worthless tissue. Increasingly it ends with euthanasia, as socialist technocrats, unethical doctors, and uncaring family members consign their elders (or infants) to the needle.

These elites use Muslim immigrants as mere pretexts, tame voters, or actual foot soldiers, in a war against their own nations. Trump addressed that too. He warned that the West faces an “oppressive ideology — one that seeks to export terrorism and extremism all around the globe. … While we will always welcome new citizens who share our values and love our people, our borders will always be closed to terrorism and extremism of any kind.”

Why the West Is Different from the Dar al Islam

Trump read a kind of love letter to the open, Christ-transformed civilization of the West:

We write symphonies. We pursue innovation. We celebrate our ancient heroes, embrace our timeless traditions and customs, and always seek to explore and discover brand-new frontiers.

We reward brilliance. We strive for excellence, and cherish inspiring works of art that honor God. We treasure the rule of law and protect the right to free speech and free expression.

We empower women as pillars of our society and of our success. We put faith and family, not government and bureaucracy, at the center of our lives. And we debate everything. We challenge everything. We seek to know everything so that we can better know ourselves.

And above all, we value the dignity of every human life, protect the rights of every person, and share the hope of every soul to live in freedom. That is who we are. Those are the priceless ties that bind us together as nations, as allies, and as a civilization.

Lumping the Whole Right in with the Alt-Right

This was a speech that could have been delivered, decades ago, by anti-Nazi heroes like Charles de Gaulle or Konrad Adenauer. So of course today the left smears it as quasi-fascist. Most leftists are too self-righteous and unused to being challenged to know how to argue anymore. So instead they use the strategy of stigma. Their only move is to skew the spectrum so far in their own direction, that they can lump in common sense and perennial insights with racist delirium.

Sarah Wildman of Vox wrote a column entitled “Trump’s speech in Poland sounded like an alt-right manifesto.” Her piece offered nothing to justify that charge. If we distinguish the Alt-Right by its attachment to white racialism, her claim was frankly dishonest. Vox is simply trying to smear traditional conservatives with the filthy brush of racism. (What else is new?) The values that Christianity infused into the West are as universal as Christianity itself. Trump’s speech could have been given, with a few historical details switched, in Guatemala, Armenia, or Ethiopia. It still would have worked.

Peter Beinart in The Atlantic warned of “The Racial and Religious Paranoia of Trump’s Warsaw Speech.” He noted, accurately, that Trump’s speech was much more grounded than the watered-down rhetoric of President George W. Bush (among others). Trump acknowledged, frankly, that the values Americans cherish have their roots in real places and people. They emerged in the West, and nowhere else. That’s simply a fact. They didn’t come down from Olympus, and they weren’t buried in ancient Greece, then unearthed in the Enlightenment — as the EU Constitution pretends.

Those values were the fruit of a marriage between the faith of Jesus Christ and the peoples of Europe. Now they bless much of the world. They are fit for every human person, in every last land on earth. But if we poison their roots in the Christian view of the person, they will wither and die — as they are dying across Western Europe, and on American college campuses. If we replace our populations with sharia advocates and death-loving hedonists, they will fade even faster. For the likes of the EU, George Soros, and most of the American media, they cannot die fast enough. Time to press the pillow over their face.

Trump had the candor to note that the West, its institutions, and hence its values are fragile, even endangered. Beinart’s head almost exploded. He called Trump’s warning “the most shocking sentence in any presidential speech delivered on foreign soil in my lifetime.”

The fact that the president was willing to speak such truths provoked Wildman to smearing, and Beinart to intemperate fury.

In his Warsaw speech, President Trump said and did something profoundly right. The left’s attacks on it reveal their flaws, not Trump’s.