Dalton Thomas, head of FAI Relief, reveals how his aid organization linked up with the Peshmerga as they helped defeat ISIS over the past year. 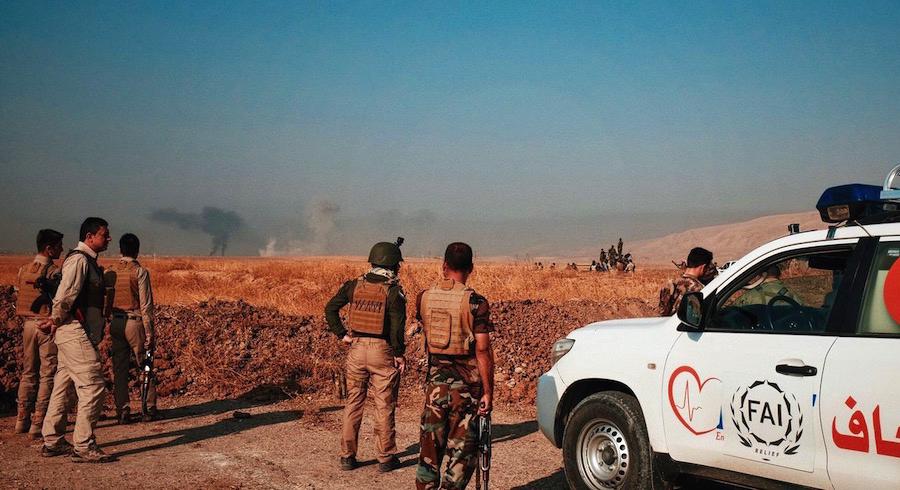 This past summer, after three long years of war, the ISIS stronghold of Mosul in northern Iraq was finally retaken. “These last ISIS holdouts, they literally fought to the death,” said Lt. Gen. Stephen Townsend in a recent interview.

Townsend has led joint U.S.-Iraqi coalition military forces over the past year. “It was the longest battle I personally have been a participant in or borne witness to in my entire military career,” he stated. As part of the coalition, the Peshmerga have been a driving force on the front lines. Derived from Kurdish-majority cities, they provide security for the northern region of Iraq where their families live.

Frontier Alliance International established a base there in 2014, just as the conflict began in earnest. Dalton Thomas, who heads up the Christian relief organization, saw the devastation of war and decided they couldn’t stay in relative safety. His team trained to become combat medics in the conflict.

Fast forward a few months to the present. On Friday, noted evangelist Reverend Franklin Graham spoke out in support of the Kurdish people. On Monday, the Kurds vote in an independence initiative that has captured the world’s attention. Whatever the outcome of the vote, Thomas reveals why his group is committed to the region.

How did your work in Iraqi Kurdistan begin to shift over the past year?

We lived in a neighborhood where the families around us were all Peshmerga, a term which means “those who face death.” They are Kurdistan’s security forces.

The vast majority of all the Peshmerga deaths since the fall of Mosul have all been from the area where we are living. Whether a sniper incident or an IED or mass casualties for whatever reason, the chances were those people were from our hometown. Everyone grieved at our city’s constant funerals.

We began to develop a combat medic ministry. We moved from simply providing food, blankets, and the like to bringing on volunteer medical professionals. We acquired the resources and medicines needed to offer first-responder triage.

The Peshmerga held the line and prepared for the offensive to retake Mosul, a strategic city ISIS had taken in 2014. Our ministry began taking trained nurses and doctors to the front lines of a war zone to serve them in a medical capacity.

Initially, we served our neighbors the Peshmerga. When the offensive began, refugees and locals from the communities were being bombarded by coalition air strikes to push back the Islamic State. We wanted to care for their medical needs as well. The cloudy thing was that many people in these ISIS-held areas initially supported the rise of the Islamic State.

I remember approaching a Peshmerga general one day who had been leading a siege of a certain village. I asked him, “Once the civilians come out, do we have your permission to check them medically? May we provide aid to them if they need it?”

And he replied, “We have good intelligence that this community was very supportive of ISIS at the beginning. These people may not necessarily be civilians, so you need to be careful.”

Then he said one of the most profound things I’ve heard in my whole life. “For decades, we’ve tried to kill the ideology out of these Sunni extremists,” he began. And this Kurdish general is himself a Sunni Muslim. “We’ve tried to eradicate it from them by killing them. I think we should try mercy. Maybe mercy could transform them more than killing them could.”
He paused after thinking. “You have my blessing,” he said. “Go love on them and they will know we were the ones who let you do it. Maybe that will have an impact.”

So we shifted to being a two-pronged ministry that includes our neighbors’ enemies. We gave medical care as well to the people affected by the military campaign.
It’s a testament to the Kurds that they allowed us as a Christian relief organization to serve their Arab enemies. It’s profound.

Your latest film, Better Friends Than Mountains, Volume Two, takes viewers onto the battlefield. What’s unique about it?

For the newest film, we didn’t want there to be any sort of hype. Because it was so grounded in war and this dramatic stuff, we really didn’t want the film to convey a messianic complex. Like a hero thing, Look how awesome we are for what we do.

We wanted the film to exalt the beauty of Jesus and the wonder of the gospel. But we also wanted to exalt the heroism and sacrifice of the people we were serving.

Film pulls together a whole bunch of powerful elements: the intellect, emotion, fact, context, visual, color, and music. It can be a doorway into touching realities that you otherwise may never touch. Now, it can also be a tool of emotional manipulation and propaganda.

So in our newest film we didn’t include any music. There’s one acapella song from my wife, and there’s one scratch version of a song we recorded off-the-cuff. That’s all the music in the whole film. We wanted to present a very clear, not-hyped-up, not-trumped-up window into what ministry looks like in a conflict zone.

FAI makes no apologies about being a faith-based group. Have you faced resistance from the Kurdish or Iraqi government because of this?

Never. There’s not even one episode where us being a Christian organization has brought about a tense conversation. We’re very open and honest about our faith.

I think the Kurds like us because they know what our motives are. They know that Christians believe in enemy love and in serving the poor. From their perspective, the ethical and moral code of Christians is something to be praised not ridiculed. Because most Kurds are Kurdish before they are Muslim, their Muslim ideology doesn’t really affect how they view Christians.

Every now and again, you’ll meet someone on the street who doesn’t like Christians because he might be more fundamentalist in his ideology. But in terms of authority figures, we’ve never met anyone in the government or military who’s given us any pushback. The Iraqis are a little bit different. With different military groups, you’re going to experience different levels of extremism in their ideology. But in terms of the Kurds, it’s really hard to find an extremist in Iraq.

The issue of how Kurds treat ethnic Christian minorities is a different matter. There are some serious issues that need to be sorted out. In fact, it’s one reason why there’s some opposition within Kurdistan to the referendum for independence. Some people don’t support it because of how they perceive the Kurdistan Regional Government and their treatment of Christian minorities. What I mean by that is not foreigners, but Assyrian and Iraqi Christians — those who identify with the ancient Christian community for thousands of years.

As foreign Christians, we’ve never faced any resistance from Arab Iraqis, the Kurdish Peshmerga or the Kurdish government. They have received us with open arms and become like family and brothers to us.

How does your team reflect a shift in how Christian relief work is defined?

The two towering figures of Christian missions are William Carey and Hudson Taylor. What they did and how they did it influences every missions organization on the earth today. Certain models emerged for church planting and disciple-making.

When William Carey came out with his proposition to evangelize the world, it was a massive paradigm shift for his generation. We’re in one of those moments right now. The church is undergoing significant reconfiguration of what we do and how we do it. I believe the Lord is highlighting why we do it.

Without sounding critical, let’s ask a question. Why do 99.9 percent of missionaries go to places already reached for the gospel? It’s easier, that’s why. Look out over the landscape of the missions movement today in the West. By and large, missions agencies are more likely to send people to a place that has a Starbucks than one that doesn’t have access to the gospel.

Why do we go? It comes down to two reasons. The why is because Jesus is worth it. Number two, we should prioritize the people who are least likely to encounter that Man who is worth it. It means we’re going to have to prioritize locations people are not going to.

The more we probe the question of why, the more we’ve had to get experimental. If He really is worth it, and if these people really are worth it, then it forces you to ask big questions about the what and the how. We’ve got teams all over the Middle East and every team is doing something very different. Because there is no model or silver bullet.

Jesus said, Go and make disciples of all nations. He didn’t necessarily say how to do that, beyond teach them to obey everything He commanded. You can teach people in a medical context or an education context. For us, the form and the expression is not the important part.

What’s important is why we should even have an expression to begin with. Because if we have an expression of ministry that is not undergirded by a realistic, biblical and worthy why, should we even bother? Why move halfway across the world to drink Starbucks somewhere else? You could do that in the U.S.

Iraqi Kurds will vote September 25 on whether to seek independence. How does the movement towards an independent Kurdistan impact your work?

To a degree, it won’t. Our mandate to care for people is clear and unchanging. Whether Kurdistan continues as a semi-autonomous state within Iraq for years, or whether they gain independence, the trajectory of our work there is set.

An independent Kurdistan could change the logistics of what we do. Any time there’s the creation of a state, logistical issues like visas and banking have to be worked out. On the other hand, this referendum — or the rejection of it — could spark opposition, regional conflict or turmoil.

At the end of the day, what we do and why we do it stands firm.

As a 501(c)3 faith-based nonprofit group, Frontier Alliance International provides provisional aid and medical services in northern Iraq and across the Middle East. All donations go directly to fund relief work and are tax-deductible.