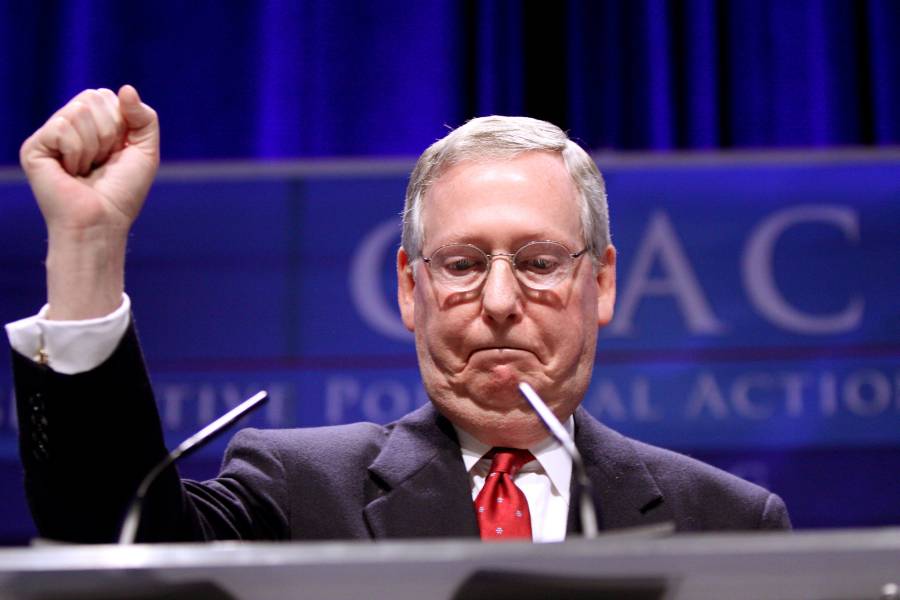 In the Led Zeppelin concert flick, The Song Remains the Same, guitarist Jimmy Page does this wild solo on the song “Dazed and Confused.” Man, it’s a virtuoso tour de force. I wasn’t a huge Zeppelin guy, but my jaw was on the theater floor. “He’s playing with a violin bow?! Are you kidding me?!” It was great!

I think of “Dazed and Confused” when I think of Nancy Pelosi.

Inexplicably, she’s been holding on and on and onto the impeachment articles for weeks now, rather than send them over to the Senate. And even today, her song remained the same. She’ll send the articles “when I am ready.” She wants to hold onto them tighter than front row tickets to a Zeppelin reunion.

Unfortunately for Nancy, Senate Majority Leader Mitch McConnell is ready to kick off the Senate Impeachment Show and leave Nancy out like a “fool in the rain.”

The Trial to Launch Next Week?

The Hill is now reporting McConnell told GOP lawmakers in a caucus meeting Thursday don’t make plans to go home next weekend. This indicates the trial will be underway next week. Sen. Kevin Cramer (R-N.D.) told The Hill McConnell’s now expecting articles to come over the “next day or two.”

It’s little surprise Nancy’s overindulgent solo act is over. Seven Democratic senators came out Wednesday and said Pelosi needed to stop. That includes the senator from her own state (and district), Sen. Dianne Feinstein. Remember how Pelosi was insisting how “urgent” impeachment was? Feinstein’s called her out. “The longer it goes on the less urgent it becomes. If it’s serious and urgent, send them over,” she said. “If it isn’t, don’t send it over.”

“I don’t know what leverage we have,” said Sen. Jon Tester of Montana. “It looks like the cake is already baked.”

Or is it humble pie?

Earlier Thursday, Sen. Josh Harley announced McConnell was backing a measure to change Senate rules and dismiss impeachment without the articles. Hawley’s resolution gives the House 25 days to send to the Senate any articles of impeachment. After that, “such articles will be deemed exhibited before the Senate.” At that point, senators could offer a motion to dismiss “with prejudice for failure by the House of Representatives to prosecute such articles.”

And here’s the catch. In this case, the 25 days doesn’t start with the passing of Hawley’s resolution. The clock began when the House adopted the impeachment articles December 18.

McConnell’s office hasn’t confirmed he’ll bring forward Hawley’s resolution. However, he did take another shot at Pelosi. “The Speaker began something that she herself predicted would be ‘so divisive to the country’ … and now she is unilaterally saying it cannot move forwards towards a resolution.”

Earlier in the week, McConnell mocked the idea that the Senate would have to get the House’s approval for their trial plans. Pelosi, in an amazing fit of chutzpah, argues she can hold onto the articles until she sees the Senate plans and is assured the trial will be fair. Hogwash, says McConnell.

“There will be no haggling with the House over Senate procedures. We will not cede our authority to try this impeachment. The House’s Democrats’ turn is over,” McConnell said earlier this week. “This is for the Senate, and the Senate only, to decide.”

And so, next week, the Senate may finally get to “Rock-n-Roll.”