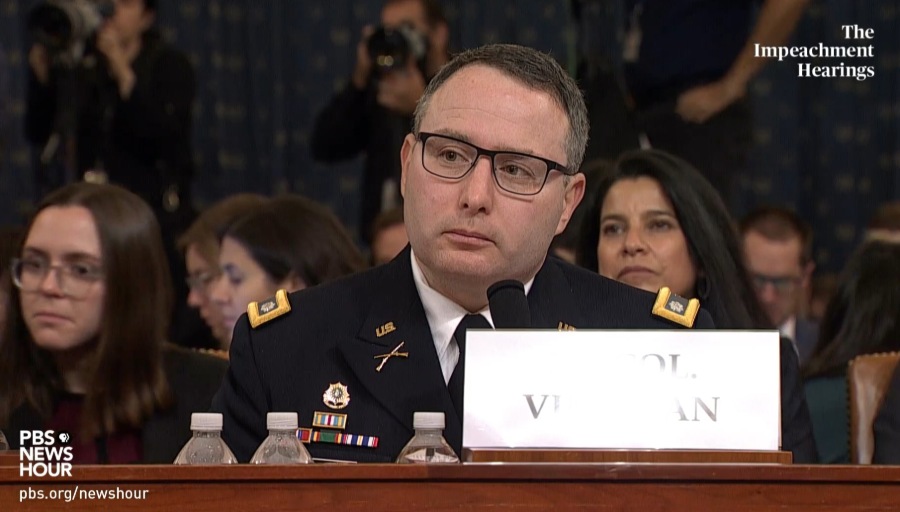 As a favor to those upset at the Impeachment Hearings pre-empting their soaps, Adam Schiff offered Tuesday an astounding mind-numbing dramatic twist that would make Susan Lucci proud. In an effort to protect the Whistleblower, he outed the Whistleblower! Dun-dun-duuunnnnn.

Alexandra is asked directly by Ada’s jilted husband, “Do you know who Ada’s lover is?”

“Who did you have dinner with Friday night in Georgetown?”

“Don’t answer that, Alexandra!,” Ada shouts. “That gives away who my lover is!”

Vindman testifies under oath he does not know the whistleblower.

Nunes presses him on whom he spoke to about the president’s call. After mentioning one person by name, Vindman says he also spoke with another individual in the intelligence community. He refuses to name him.

Dun-dun-duuuunnnnnnn. Cut to a stunned Devin Nunes. But no fade to commercial.

Still no fade to commercial. Instead, Vindland gives an answer only the Deep State could love:

Per the advice of my counsel and instructions from the chairman, I’ve been advised not to provide any specifics on who I have spoken with inside the intelligence community.

In another little bit of theatrics, Rep. John Ratcliffe stacked high a pile of released depositions and declared that none of the witnesses thus far has even mentioned the Democrat’s new favorite word: “bribery.” Actually, that’s not quite true, said Ratcliffe. The word was mentioned once, but in conjunction with former Vice President Biden’s actions regarding Ukraine.

We also learned all about talking points … and Trump’s obvious fondness for going off script. For your amusement, check out this video between Rep. Will Hurd and Lt. Col. Vindman:  https://www.c-span.org/video/?c4831317/user-clip-trump-talking-points

Then there is this head scratcher of a moment. Jim Jordan asked “Why didn’t you go directly to your superior with your concerns?”  Answer: “It was a really busy week.”

.@Jim_Jordan asks Vindman why he didn’t go directly to his superior with his concerns about the phone call instead of George Kent and an unnamed CIA person.

“It was a really busy week…”
pic.twitter.com/QKdCmPjOjm

Love to see a soldier in wartime try to say that.

Vindland also said “the lawyer told me not to talk to anyone else.” Responded Jordan, “And yet you talked to your brother, to George Kent, and a CIA person you won’t name.”

What else did we learn that actually has some relevance to an actual impeachment? As The Blaze summarized,

The transcript of Trump’s Ukraine call is accurate.  (So much for that popular charge by the TDS mob.)

Lt. Col. Vindman confirmed no one in Ukraine indicated they were feeling pressure. (So much for that Democratic talking point.)

The PRESIDENT SETS foreign policy, not bureaucrats. (So much for Vindman’s delusions of grandeur.)

The Blaze’s other revelation was humorous :”Epstein did not kill himself.” Over in another hearing room about the Epstein death, Rep. John Kennedy offered this line for the ages: “Christmas ornaments, drywall and Jeffrey Epstein — name three things that don’t hang themselves.”

However, in the impeachment hearing, Adam Schiff did hang himself … and Vindman … and the Whistleblower out to dry.