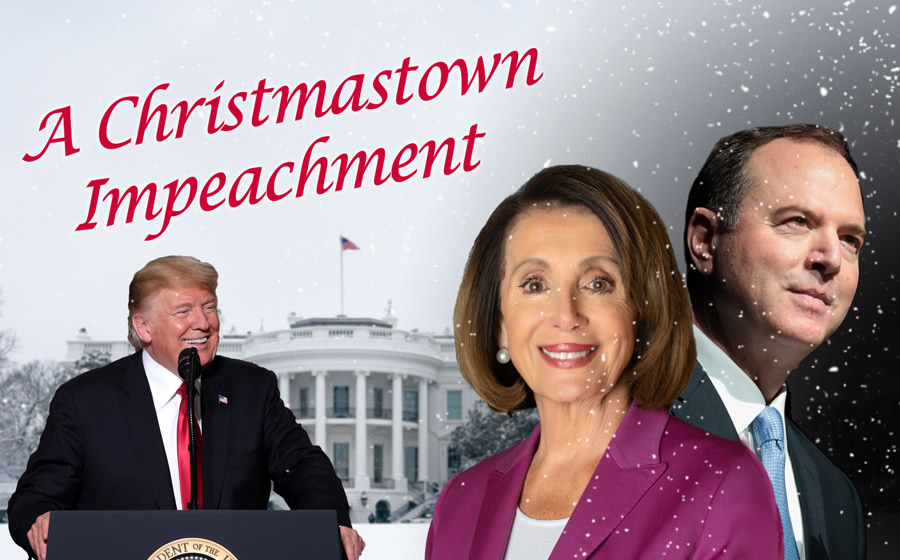 Hallmark’s 10th anniversary “Countdown to Christmas” began October 26. The impeachment drama began November 9, 2016. Democrats didn’t like how the 2016 election turned out. And so they have spent the three years since desperately trying to re-write the ending. (That’s as useless as wanting the cold, oblivious, business-obsessed boyfriend in the big city to get the girl over the loving local stud in flannel. Just not gonna happen.)

And it’s not enough to be whining about the ending. The Democrats have to make everyone else as miserable as well. Like hecklers at screening of A Christmas Story.

As Scrooge would say, “Bah humbug.” As every mother in a Hallmark Christmas movie will say, “Oh, dear. Warm yourself up. Help me decorate these Christmas cookies.”

Then so many Democrats will say, “How can I enjoy gingerbread cookies when Trump is in the White House!?” (And, by the way, the Gingerbread Man identifies as a piece of peppermint bark.)

And speaking of a Ginger man. You can find President Trump in a Hallmark Christmas movie.

“The Donald” is the big ol’ historic inn the bad guys are desperate to tear down. Been around for a long time. It boasts to being the best inn in the country. It has done right for a lot of people, survived more storms and adventures than anyone can count. Yet for all its benefits, and historic achievements, “The Donald” stands in the way of the shady developers. The slicksters insist on tearing down the inn and that “for which it stands.” All to make way for their idea of “progress,” of course.

Fortunately, The Donald has many supporters who will rally to its defense. And not just for the inn, but for what the inn represents. What Christmastown represents. And the countless towns like it across the country.

House Intelligence Committee chairman Adam Schiff pops up in many a Hallmark Christmas movie. He’s the slippery lawyer or business partner desperate to tear down “The Donald.” To ruin the historic character of Christmastown, USA. In its place he’ll put up a cold, post-modern complex. He’ll do whatever is necessary to “win.” He’ll do whatever his own unseen puppet-masters want, no matter who in Christmastown gets hurt. (Remember Mr. Potter in It’s a Wonderful Life?)

It’s a little early to get a bead on this year’s Hallmark Christmas movie ratings. However, thanks to last year’s “Countdown to Christmas” the Hallmark Channel ended the fourth quarter last years as the highest rated, most-watched cable network among women 18-49 and Women 25-54. According to multichannel.com, Hallmark also whipped the broadcast networks on Saturday night, delivering more households than ABC, NBC, CBS and Fox in the 8-10 pm time slot.

The Impeachment Drama? Support has dropped 4 points from October.

Oh, we can hope and pray he’ll see the end of his wicked ways. In some Hallmark Christmas movies the Shifty character does regain his soul. But more often than not, he drives off in a black limo, thwarted in the end. Usually by a young associate with promise who had been up for junior partner. But he found love and purpose in Christmastown instead.

Will any of Schiff’s junior partners in the impeachment drama find truth, love and purpose? Isn’t the “Whistleblower” born to say the line:

If I had told you who I was, you never would have agreed to let me help with the Christmas pageant.

Yet the more we know about the guy, we’re more likely to hear from the townspeople, “We hired you serve us … but in the end you only want to serve your own agenda.” He’ll jump in the black limo as well into oblivion. (Or CNN, which is pretty much the same thing.)

Nancy Pelosi also shows up in countless Hallmark Christmas movies. She’s the jaded corporate head who worked her way up to the top of the heap, sees a lot of herself in the movie’s young ingenue. She’s played by a faded soap actress who spent more time at her plastic surgeon’s than she ever did in acting school.

Nancy’s role involved a highly predictable twist. She spent the first act arguing against destroying “The Donald” and yet on a dime suddenly decided she was all in. Fade to commercial.

Oh, her performance. The stretch-faced corporate head’s heart was breaking. This was a sad day. Her unnaturally wide eyes nearly wept crocodile tears. She hated to do it, she tells her protege. Hated it. You could see right through her like a snow globe.

House Democrats and Other Flakes

House Democrats and the media are much like the snow in a Hallmark Christmas movie. Fake flakes covering up everything.

They’re also the fancy city-slickers who turn up toward the end of the movie, take one cynical sniff at the good and charming and welcoming citizens of Christmastown and yawn, saying, “How could you stand being here? C’mon, seal the deal. Close down The Donald. We’ve got a plane to catch.”

What Will She Decide?

What will the heroine decide? With every Hallmark Christmas movie we know how the story ends. Love and decency prevail. The inn stands and continues to serve.

But the impeachment drama is darker than a Hallmark Christmas movie. It’s a sinister blood-soaked cross between Machiavelli and Kafka. It’s more hemlock than hot cocoa. Manipulation than mistletoe. Star Chamber than starry winter nights. Sure, Trump is very likely to remain standing at the end of this drama. But how much and how many will be laid to waste? How toxic will land be? As the credits roll, how nauseous and spent will we feel? What are the chances Democrats won’t immediately begin clamoring for a sequel?

The good news? America can flip the channel. It’s harder and harder to find amid the negative programming, but hope is there if you look for it. And next November, there can be a happy ending for Americans … just in time for the 11th “Countdown to Christmas.”

Al Perrotta is the Managing Editor of The Stream and co-author, with @JZmirak, of The Politically Incorrect Guide to Immigration. He’s currently working on a dozen Hallmark Christmas movie scripts … at least in his mind. You can follow him at @StreamingAl. And if you aren’t already, please follow The Stream at @Streamdotorg.