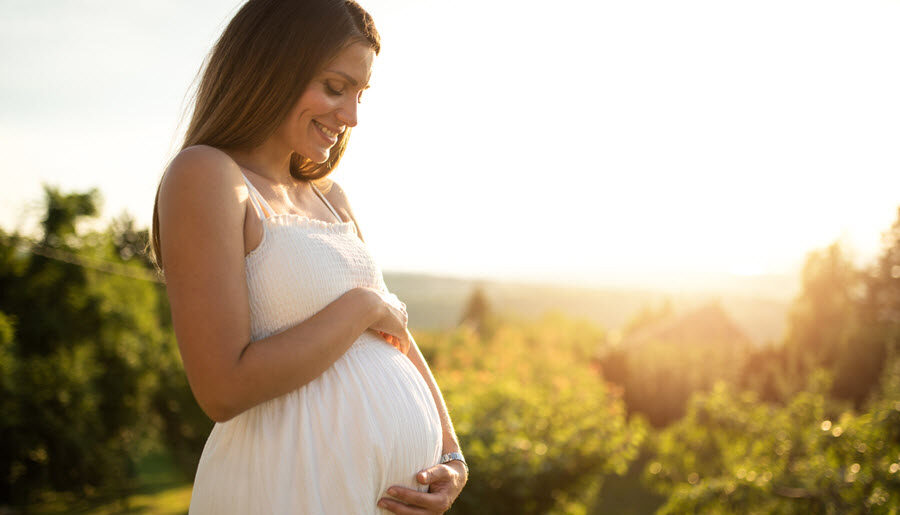 Editor’s Note: This article was originally published on July 1, 2021. We’re re-publishing it today in conjunction with International Women’s Day, which is still peddling a lot of woke nonsense. See also Jennifer’s excellent response to their “Day Without a Woman.”

No razor has ever touched my face. My breasts are simply flesh and milk glands. I have lived for decades with the blessing and trials of a menstrual cycle. I have a womb; this wondrous, remarkable, expansive thing except when it is small and unremarkable. Within its secret dominion I have nurtured six babies.

I have a pelvis perfectly designed to cradle a growing, preborn child. I have a body capable of doing the miraculous — giving new life — and I have been blessed to give birth to four beautiful children. Two of my children are already ahead of me on the road, awaiting my arrival.

With those ordinary, fatty breasts I fed my babies night and day with a miraculous food only God could manufacture. On the curve of my hips, I carried my little ones for years. Body and mind, heart and soul, I nurtured, carried, fed, and gave life to my children. Because that is what an ordinary woman can do. It is something no man on earth can do in the same way.

A woman is not a costume any man can put on.

My very nature is oriented toward life — co-creating new life, nurturing life, sustaining life. It is woven into the design of a woman. It is, in our modern lexicon, a superpower.

A woman is not a creature constructed by a surgeon.

I am not made of silicone, plastic, acrylic, or glitter. I require no gadgets to maintain what the surgeon has artificially constructed. My body was lovingly designed and fashioned by God, not man.

The Trampling of Womanhood

A woman is not a costume any man can put on. She is not a clown decorated with outlandish hair and makeup and sexually suggestive get-ups. She never ever resides inside a male, waiting to be let out. A woman is female.

The speed at which the ordinary woman is being trampled on and erased is alarming. Each passing day brings new instances of girls and women being shoved aside by a man claiming womanhood for himself. And with each occurrence, women are further dismissed and robbed. The “right” of men to plunder the very reality of womanhood and demand its actuality for themselves grows stronger.

Consider disgraceful cowards like Ohio representative Michael Skindell and other Democrats who melted down in a childish temper tantrum as Rep. Jena Powell tried to introduce the “Save Women’s Sports Act” amendment this week. Powell rose to speak to the reality that men are indeed taking away the medals and scholarships women have worked for and earned, and the Democrat boys in the room pounded on their tables to drown out her voice.

Read that again: a woman trying to defend women’s sports was pounded down by bully boys who feel entitled to silence her and take women’s rights for their own.

The Madness Has Reached Olympian Levels

Even Olympic committees have succumbed to this madness, allowing men to displace women athletes. Laurel Hubbard is a 43 year-old man competing in the women’s weightlifting events for New Zealand. 21 year-old Kuinini Manumua should be competing for her country, but Hubbard has robbed her of that chance.

A woman in a Los Angeles spa recently found out the hard way the law no longer protects women’s privacy. She and her young daughter encountered a naked man in the women’s locker room and upon complaining to the staff, was told he had every right to be in the women’s space.

Another man who overheard her complaint decided to berate her for her intolerance. Men now have the legal “right” to expose themselves in front of girls and women, and invade the spaces where girls and women undress. It is the women who are shamed for objecting to this violation.

Out west, a man has just been crowned “Miss Nevada USA.” Kataluna Enriquez beat out 21 women for the crown and now he’ll compete in the Miss USA pageant. The Media Research Center reports:

His campaign for the Miss Nevada crown was remarkable and even local Fox affiliate KVVU-TV described it as “redefining what it means to be a woman … .” …

After winning the Miss Nevada crown over the weekend Kataluna stated, “Today I am a proud transgender woman of color. Personally, I’ve learned that my differences do not make me less than, it makes me more than.”

Is it sinking in yet? Men are “redefining what it means to be a woman.” Men are winning the women’s prizes. The woman of the year is a man.

Women, Do Not Forfeit Your Very Nature to Men

Misogyny is such a praiseworthy pursuit in our age. And modern feminism, that brain-rotting poison, persuades women by the masses to inexplicably, self-destructively applaud the swindlers and welcome them as “sisters.”

Gentlemen, you must show you value the genuine beauty of an ordinary woman. You must fight to protect your wives, daughters, and sisters from the mockery, the intrusion, the violation of men claiming to be women. I beg you to stand in between the women you love and this trans-madness before it is too late.

Women, do not forfeit your very nature to men, nor sell your daughters’ physical reality down the mad river. Ignore the screaming mob and the baseless insults they hurl. There’s no middle ground here. Either women are female, or woman means nothing at all.

This is a hill I will die on because my daughters shouldn’t have to. I hope I’m not alone.