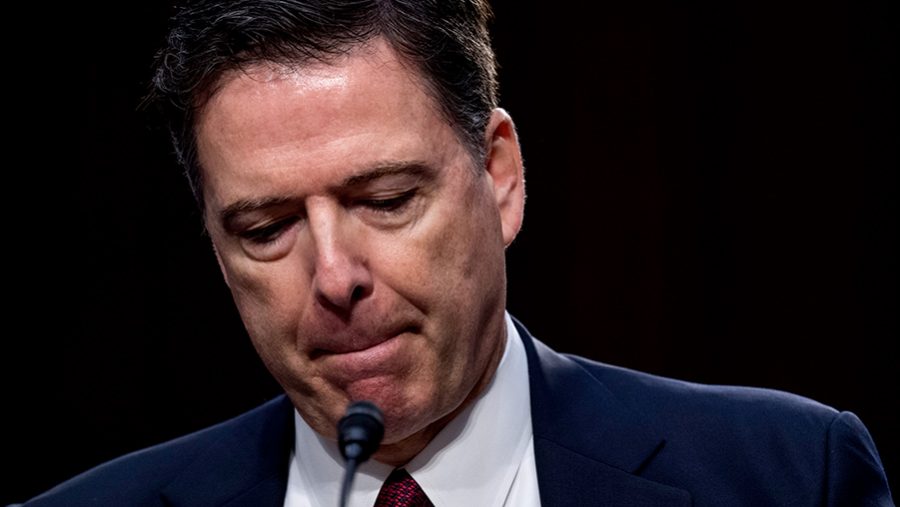 Good news for disgraced former FBI director James Comey. He won’t be criminally prosecuted for leaking memos of his conversations with President Trump.

The bad news for Comey. It ain’t that he didn’t break the law. In a scathing report, DOJ Inspector General Michael Horowitz concluded Comey’s “retention, handling, and dissemination of certain Memos violated Department and FBI policies, and his FBI Employment Agreement.” Also, it “set a dangerous example for the over 35,000 current FBI employees.” Michael Horowitz also slammed Comey for releasing sensitive information in his personal desire to force the appointment of a Special Counsel. Especially when there were other, “lawful” means to do so.

Put another way, the white hat Comey insists on wearing is as filthy as the man is tall.

The OIG Report on Comey

On Thursday Horowitz released a “Report of Investigation of Former Federal Bureau of Investigation Director James Comey’s Disclosure of Sensitive Investigative Information and Handling of Certain Memoranda.” This is not the IG Report on the phony Trump-Russia investigation that is expected to drop in the coming weeks. Consider this a side report. A clearing out of the brush.

And boy, does Horowitz set that brush ablaze.

The basics: Comey wrote seven detailed memos about his conversations with first President-elect, then President Trump. After getting dumped by Trump, Comey leaked Memo Four via a friend to The New York Times. His stated goal: to force the appointment of a Special Counsel to investigate Trump.

Comey, in short, unlawfully leaked FBI information to “get” the President of the United States.

Memo 4 “included information that was related to both the FBI’s ongoing investigation of (Michael) Flynn and, by Comey’s own account, information that he believed and alleged constituted evidence of an attempt to obstruct the ongoing Flynn investigation.” The same day the NYT published an article titled, “Comey Memo Says Trump Asked Him to End Flynn Investigation.”

Horowitz’s conclusion is absolutely withering. Comey “failed to live up to” his responsibility to “protect sensitive law enforcement information.”

By not safeguarding sensitive information obtained during the course of his FBI employment, and by using it to create public pressure for official action, Comey set a dangerous example for the over 35,000 current FBI employees … who similarly have access to our knowledge of non-public information.

This is no doubt part of the reason why Comey’s closes advisors used the words “surprised,” “stunned,” “shocked,” and “disappointment” to describe their reactions to what Comey had done.

Horowitz said “Comey had several other lawful options available to him to advocate for the appointment of a Special Counsel. What was not permitted was the unauthorized disclosure of sensitive investigative information, obtained during the course of FBI employment, in order to achieve a personally desired outcome.”

Comey, in short, unlawfully leaked FBI information to “get” the President of the United States.

Yes, The Memos Were Government Property, Not Comey’s

And yes, says Horowitz, it was FBI information. Comey tried arguing memos 2-7 were personal notes. A diary. Horowitz said that was nonsense. Comey’s claim has “no support in the law and is wholly incompatible with the plain language of the statues, regulations, and policies defining Federal records.” It also violates Comey’s FBI Employment Agreement.

Since these were FBI documents, Comey further violated policy by retaining copies of Memos 2, 4, 6, and 7. Keeping copies would have required permission and a non-disclosure agreement.

Further, Comey didn’t bother to tell investigators that he had sent copies of several of the memos to his lawyers. Again, without authorization.

Several of the memos contained classified information. Comey tossing the memos around to and fro also violated policy.

Comey’s own, personal conception of what was necessary was not an appropriate basis for ignoring the policies and agreements governing the use of FBI records, especially given the other lawful and appropriate actions he could have taken to achieve his desired end.”

Yet Comey Will Not Be Charged

The IG referred Comey to the DOJ for prosecution. However, the DOJ declined to press charges. We have yet to learn why. And we’ll have to ask if Comey just getting scolded for disregarding laws and regulations on his own personal whims — again — is enough? If Comey avoids criminal prosecution for this egregious violation of the public trust, why wouldn’t those left in the FBI use whatever info they have to settle their personal scores? Or those in the IRS? Or any other Deep State operator?

Yes, this is not the worst of the misdeeds pulled by Comey and his crew. We’ll see what happens when the full IG Report comes out. However, justice requires consequences. Detailing what a slimy, slithering Swamp rat Comey is simply is not enough.

DOJ IG "found no evidence that Comey or his attorneys released any of the classified information contained in any of the memos to members of the media." I don’t need a public apology from those who defamed me, but a quick message with a “sorry we lied about you” would be nice.

The White House followed with its own statement:

James Comey is a proven liar and leaker. The Inspector General’s report shows Comey violated the most basic obligations of confidentiality that he owed to the United States Government and to the American people, “in order to achieve a personally desired outcome.” Because Comey shamefully leaked information to the press — in blatant violation of FBI policies — the Nation was forced to endure the baseless politically motivated, two-year witch hunt. Comey disgraced himself and is office to further a personal political agenda, and this report further confirms that fact.

OIGReport by Geoffrey Rowland on Scribd

Franklin Graham Asks Christians to Pray for the President June 2: ‘The Only Hope’

US Official Says Withdrawal From Syria Has Started