If the Nazis Had Won World War II, Europe Today Would Look Like … Communist China 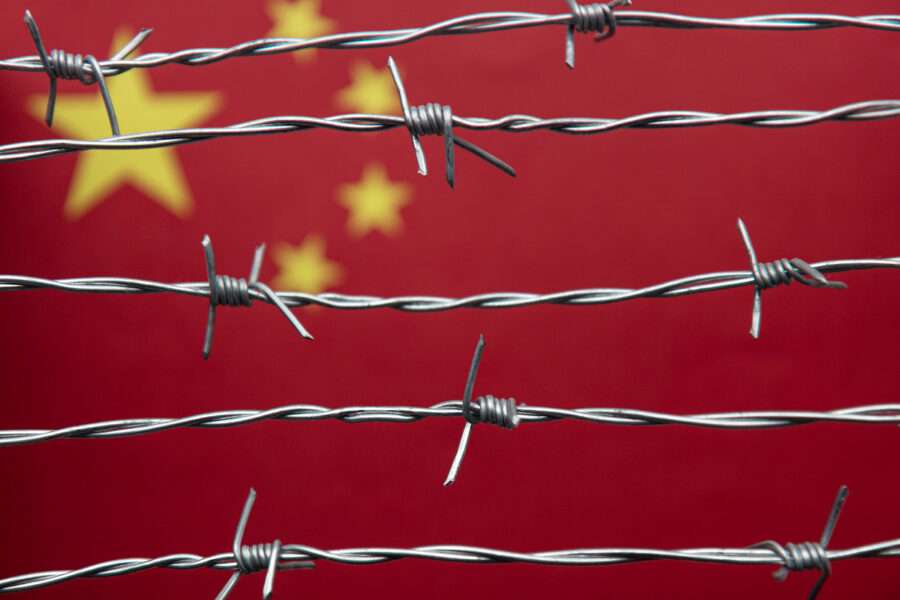 Last week, I was doing my regular appearance on the Eric Metaxas Show. That’s always a pleasure for me (and I hope for him), because in many ways we think alike, and our repartee provokes new ideas and insights, in real time, right on the air. And one popped out this time, a new way of looking at something we take for granted, which shined a light on overlooked truths. I said:

Let’s talk about mass genocide and evil, totalitarian ideologies. Imagine if the Nazis had won the war and were still in power in Germany, today. That’s what we’re talking about, when we talk about the regime in China — which killed maybe 60 million of its own people, which is still in power.

Imagine you went to Berlin now, and there were swastikas everywhere, and people were driving Volkswagens with little swastika flags on the Autobahn. That’s China.

What If the Nazis Had Won World War II?

Millions of readers and viewers have entertained ourselves with speculation about the “What-Ifs” of history, especially World War II. An entire genre exists of dystopian books and movies imagining how a triumphant Nazi regime would have behaved towards its people and the world, and how the rest of us would have dealt with it. Some of the best examples are Robert Harris’ Fatherland, C.J. Sansom’s Dominion, and the TV adaptation of Philip K. Dick’s novella The Man in the High Castle. I’ll admit I’m a fan of this genre, and of well-done alternative history, which I think can help us learn a great deal about what actually happened and why.

But talking to Eric last week, I realized something: That in a sense, such books are redundant. Their authors wrack their brains and stretch their creativity to try and imagine what it would look like if a society with a venerable, highly sophisticated civilization:

Do we really have to wonder what such a regime would now look like, based in Berlin? How much would it really have looked any different from the government in Beijing today?

If Albert Speer’s grandson or Heinrich Himmler’s nephew were running The Greater German Reich in Europe today, they would certainly have imposed “market-based” reforms such as China saw in the 90s — if only to stave off the economic implosion that took down the USSR.

And people like George H.W. Bush and Bill Clinton would have welcomed such reforms, and opened up American trade to the Reich, blathering promises that “free markets will bring about free societies,” of the kind that got China into the World Trade Organization. And our big companies like Apple and Google would be doing massive business with the Nazis, outsourcing their production to its concentration camps — the way those companies do today with China’s camps full of Uyghurs.

If Albert Speer’s grandson or Heinrich Himmler’s nephew were running The Greater German Reich in Europe today, people like George H.W. Bush and Bill Clinton would have opened up U.S. trade to the Reich.

Going further, I’m confident that a Nazi government in 2019 would have pursued “gain of function” research into new, deadly bioweapons just as eagerly as President Xi’s government did. And it would have found willing American collaborators like Anthony Fauci. When a COVID-style outbreak inevitably occurred, the Reich’s pals and partners in the West would have covered up its involvement, praised its authoritarian response, and tried to impose a similar public health dictatorship in our countries.

I wonder if Europeans after 80 years of fascism would still show the spirit that Chinese are showing today. As I went on to say to Eric Metaxas:

China is still ruled by a mass-murdering, genocidal totalitarian party … that gave us COVID, that dumped a bioweapon on our country, either callously or intentionally. And then we imitated their totalitarian lockdown policies, their biological tyranny, their public health dictatorship.

Now, the General Tso’s Chicken is coming home to roost. The Chinese people are rebelling against their evil, demonic, stupid, incompetent totalitarian government — in a way that the Americans voters didn’t during the midterm elections.

The Chinese People Are Rising Up

Eric and I unpacked for the rest of the hour the “white paper revolution” of ordinary Chinese finally so desperately fed up from a total lockdown society justified by COVID panic that they’re challenging the same regime that ran people down with tanks in Tiananmen Square, and now holds 3 million Uyghurs and other prisoners of conscience in concentration camps. Watch the show here; the China discussion starts at 17:40.

N.S. Lyons goes into more detail over at the excellent centrist free speech magazine Unherd (you ought to bookmark it!):

For three years, the Chinese government has maintained its policy of draconian city-wide lockdowns, endless daily mass testing, and digital Covid-passes. It has set up vast camps to house those dragged into quarantine for weeks at a time, and, more recently, “closed-loop” factories.

But many have finally had enough. Over the past several days, protests have erupted in at least two dozen cities and 79 universities across the country, with spontaneous demonstrations quickly drawing crowds of hundreds, even thousands, of people willing to fearlessly demand an end to the Zero-Covid nightmare. In Wuhan, where it all began, swarming crowds smashed down containment barriers and “liberated” locked-down neighbourhoods. In Lanzhou, they overturned Covid-testing booths; in Chengdu, they chanted “give me freedom or give me death!”

On 24 November, a fire at an apartment complex in Urumqi, Xinjiang, killed as many as 44 people, including children. Social media posts alleged they could not escape because the doors and windows of their building were wired shut (you know, for safety), and because responding firetrucks were not allowed past a checkpoint into the “quarantined” zone, preventing them from reaching the building (you know, for safety). While authorities have denied this — instead blaming residents for lacking “the knowledge or capability to rescue themselves” — China’s citizens are convinced otherwise.

They can see the residents were killed by the senseless, inhuman bureaucracy of China’s Zero-Covid machine. They know that they could easily be next.

Western Elites Will Always Side with the Dictators

As Lyons points out, elites in the West are invested in China’s conflict. They’re rooting for the government against its people:

The BBC, the New York Times, Axios, and the Financial Times have all praised China’s “freedom fighters”, but they also echo the Official Line: somberly asserting that China’s leaders are “in a bind” and can’t actually open up like the people naively want. If they do the hospitals will immediately be overwhelmed, untold millions will die, and the economy will suffer massively. Zero-Covid might be a bit excessive — what with people starving in their apartments and throwing themselves off buildings — and the government should probably loosen up somewhat, especially to get commerce flowing again. But ultimately top-down control will have to be maintained for the people’s own good. It’s an understandably difficult situation for Beijing.

[T]here is only one real reason for China’s insistence on the Zero-Covid policy, and it’s one we also have some recent experience with in the West: pure ideological psychosis, rooted in the CCP’s pathologically fearful desperation to maintain total control of everything at all times, no matter how self-destructive the results.

What drives alleged Western liberals to spin like tops doing damage control for Chinese totalitarian autocrats? Lyons offers an answer that ought to sober us:

It is pretty clear why the mainstream international media won’t talk plainly about China’s Zero-Covid mistake. To do so honestly would be to strike directly at the same animating myth that drove “emergency” Covid measures in their own countries. The lockdowns, vaccine passports, QR codes, mass censorship, and brutal treatment of so-called “far-Right” or “conspiracy theorist” dissenters that we saw gleefully implemented by governments all over the world — and which were based directly on the China model — were always worse than irrational and illiberal. To point out that such measures are a continuing crime against humanity in China would be to point out that they were a crime against humanity everywhere.

We don’t need to speculate about how “liberal” Westerners would act toward a Nazi-style dictatorship today. It exists, and they’re already eagerly cooperating with it and imitating it. Pope Francis has allied the Vatican with that regime. And you’ll get kicked out of the NBA if you say anything much about China apart from “Heil Xi!”