I Have Called You Friends — The Importance of Male Friendship 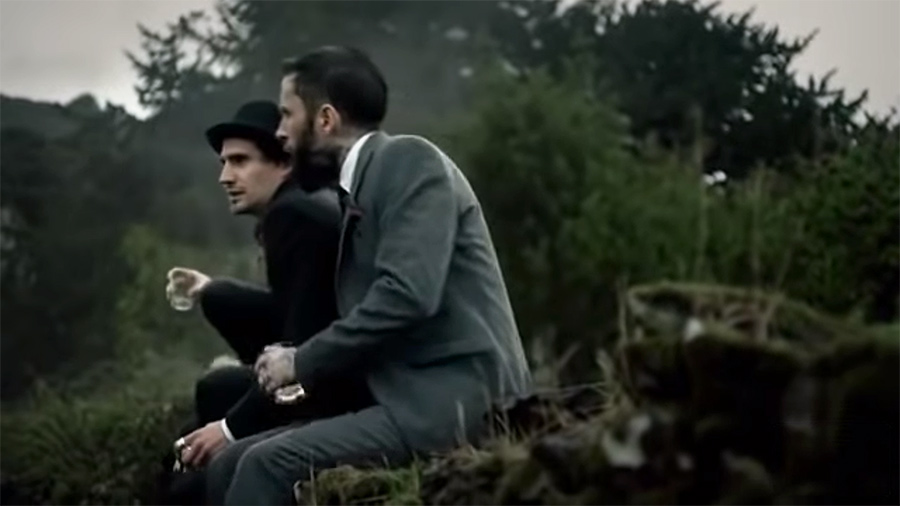 The ad is almost eight years old, yet it still brings chills. Even the recent comments on the YouTube page where it appears remain enthusiastic: “Appears to be the best TV spot on the planet.” “I have never given a thumbs up to a commercial. Until now.” “I’ve watched it time and time again!! Still awesome!!”

The ad is about Tullamore D.E.W. Irish Whiskey, using the theme of male friendship as its selling point. The film finds four young men walking across the Irish countryside on a rainy day, wearing their best black suits. They wind up sitting on a stone wall facing a graveyard by a chapel, toasting with whiskey and singing the Irish folk song “A Parting Glass.” It seems like a wake, but then a beautiful wedding bride appears. The boys are not losing a friend to death, but to marriage.

Coming across the ad again I thought of how crucial male friendships are. Women tend to make friends more easily than men, and aging men with few friends has become a social crisis. As men lose more and more friends, the loneliness that results can cause depression, diabetes and suicide.

I’ve managed to stay connected to many of my close male friends over the years, including my best buddy Fletch. I call him Fletch because he reminds me of a slightly more serious version of the character Fletch from the 1985 movie starring Chevy Chase. In the movie, Fletch is a sharp-witted investigative journalist who loves sports and is wickedly funny, with a strong moral core that rebels against injustice. My real-life Fletch is like that, with a tangy coating of libertarian politics. He loves freedom of expression and distrusts, indeed despises, politicians.

I met Fletch in high school where we became friends working on extracurriculars like the yearbook and the student newspaper. Fletch drove me to chemo during my cancer scare of 2008, and was a faithful mate in the fall of 2018 when I was targeted in a political attack that overnight became a national obsession. My high school friend Brett Kavanaugh was nominated for a position on the Supreme Court of the United States, and at the last minute he was attacked and falsely accused of all kinds of horrible things. As a close friend of Brett’s in high school, politicians and the media tried to drag me into the battle. In essence they tried to make me — a recovering alcoholic and cancer survivor who believes in free speech and loves crime novels and beautiful women and who became a serious Christian after a somewhat wild youth — the nominee.

Abandoned in the Chaos — By Almost Everybody

In the chaos that followed, I was abandoned by almost everybody — understandably so. Who wants to be standing next to you when the Secret Police kick down your door at 3:00 in the morning?

When things were at their darkest, I was contacted by Fletch. Sitting in a motel room to avoid the press, I got a text: “Mark. I am your friend.”

Sitting in a motel room to avoid the press, I got a text:
“Mark. I am your friend.”

It was only the third time he had ever called me by my first name. Like a lot of my high school friends, he usually calls me “Judge” or “Judgey.” The two times he ever called me Mark were when my father died and when Fletch erroneously thought a relative of mine had died on 9/11.

Fletch asked me about the things they were saying about me — if there was anything to them. One important thing about a good male friend is that he will challenge you. He is fiercely loyal but will demand the truth. That you come clean about any of your sins. This was even true of Jesus, who said this in John 15: “My command is this: Love each other as I have loved you. Greater love has no one than this, that he lay down his life for his friends. You are my friends if you do what I command. I no longer call you servants, because a servant does not know his master’s business. Instead I have called you friends, for everything that I learned from my Father, I have made known to you.”

You are my friends if you do what I command. A good mate will want what is best for you, and that sometimes means having a clean soul and conscience.

One important thing about a good male friend is that he will challenge you. He is fiercely loyal but will demand the truth.

I assured Fletch that I had no memory of the accusations against me, and that the indictment of my past writing was nothing more than a Marxist, Darkness at Noon attempt at a freak show.

“Your Saul days are going to be exhibit A,” Fletch said. “You have written with total freedom — the kind that isn’t allowed in totalitarian countries. Politicians, the media and the oppo research goons have set up a triangulated kill zone. You are in the dead center of it.”

A Small Candle of Hope in the Darkness

Over the next weeks the media cited my books, picked through our high school yearbook — the same volume Fletch and I had worked on together — resurrected keg parties from the early 1980s and chased down idiotic rumors. It was an absolute frenzy, the press becoming a Frankenstein monster that was equal parts German Stasi and rage mob. It was Caddyshack meets The Lives of Others.

Fletch called me every day, giving support, advice and getting angry. We slipped into that comfortable frequency that friends share, a connection that is crucial for men, allowing them to freely talk about depression, politics, art and women with total freedom. Sex, video games, even parents cannot replace it.

Fletch also brought the funny, a small candle of hope in the darkness, as well as a sign that, like Samwise in The Lord of the Rings, he would walk with me to Mount Doom to destroy the Ring. At one point during the circus some things we had written in our yearbook and underground newspaper became scandalous. Over the phone I told Fletch that reporters had latched onto something particularly obnoxious that we had written in our underground newspaper as 17-year-old boys almost 40 years ago.

There was a pause. Then he said it.

“Is it too late to print a retraction?”