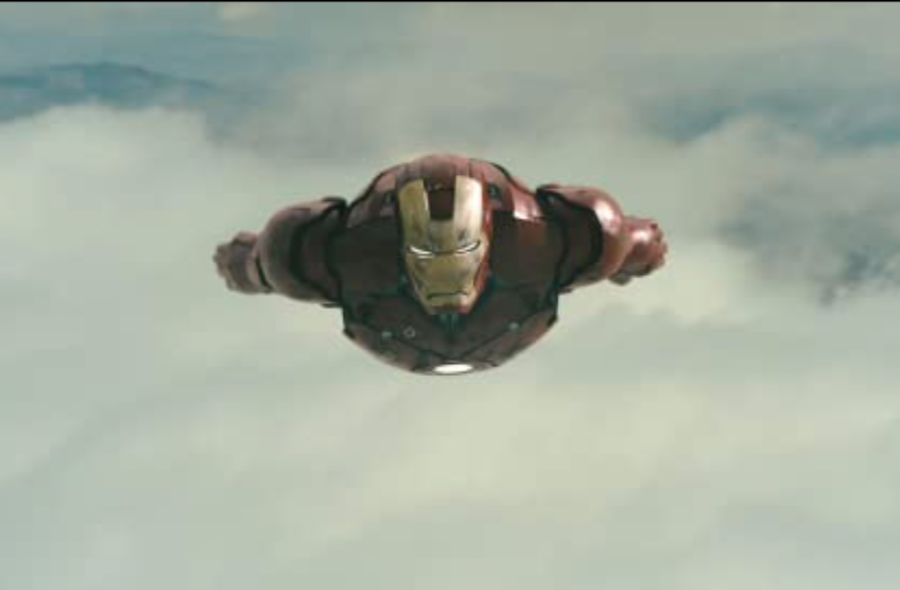 A billionaire, philanthropist, and genius, Tony Stark is also a playboy and a narcissist. In the first two acts of the movie Iron Man, he creates his Iron Man suit to escape kidnappers. In the third act, he comes home and does some superhero stuff.

When he does the superhero stuff, he is doing it as Iron Man, and no one knows it’s Tony Stark. The folks at his company and the folks in the super-secret organization SHIELD want to keep his identity secret. At the end of the movie he is doing a press conference from a script, when he impulsively decides simply to say it: “I am Iron Man.”

He’s still a philanthropist, genius, playboy, narcissist at that point, but something else is born. Tony Stark begins the process of growing into Iron Man. His claiming the name was the act of creation.

Those of us who follow the MCU (the Marvel Cinematic Universe) know there are many interwoven stories with many villains, but the prime villain these stories work toward is Thanos. (This is the Greek word for death, so it’s all there in the name.)

At the climax of this part of the saga, Thanos gathered together the so-called Infinity Stones and embedded them in a gauntlet. Doing so gives him the power to rid the universe of intelligent life with the snap of his fingers.

He’s already eliminated every second person in the cosmos. After a huge battle, Thanos, wearing the gauntlet, with all appearances of victory, snaps his fingers while uttering the line, “I am inevitable.”

However, Stark has taken the stones by subterfuge and embedded them in his own gauntlet. The use of the gauntlet releases gamma rays which are fatal to normal human beings. Tony, though a billionaire, genius, etc., is a normal human being and knows that using it will be the end of him. No longer a playboy, he has a wife and small child.

Nonetheless, he snaps his fingers to defeat Thanos’s alien army and save the world, while answering Thanos with the phrase, “I am Iron Man.”

The world is saved, but not for him. He dies a billionaire, philanthropist, genius — but not a narcissist or playboy. The process begun when he first uttered that name has come to completion. He’s become the ideal set forward in the name. He became the man he told the world he was.

Power in the Word

The other day, I listened to a long YouTube video explaining that chairs don’t exist. I wasn’t too worried about sitting in a chair as I listened; maybe I should’ve been. It did highlight the difficulty of capturing concrete objects in words. At a certain level, a thing is a chair because I say it is, because a human says it is. (The philosopher would say that introductory phrase “At a certain level” is carrying a lot of weight, but let that go.)

There is also a process involved. One day some caveman tired of sitting on the ground, cobbled some rocks together, and said, “This is a chair.” The folks around him were confused. They’d never seen or heard of such a thing. As time passed, people figured it out: A chair is something designed for people to sit on. Now I can put a box up against the wall and call it a chair and people will get it. They know they can sit on it if they want to.

A human calling it a chair was what got it started. While chairs might be made out of wood, plastic, or naugahyde, and made in a few different shapes, the chair was created with a word.

There is power in the word. Jesus warns us that we are made unclean by what comes out of us in speech. In his epistle, James warns us that the tongue is like the rudder of a ship. That’s the negative power. There’s also a positive power.

God spoke the universe into existence. Being who I am, when I hear Stark say, “I am Iron Man,” I also hear, “I am that I am”; “I am the Way, the Truth, and the Light”; “I am the Vine and you are the branches.”

The things we say affect us. Can we create ourselves out of our own utterances? Yes, if we live into the name we declare. And that won’t always be easy. The first time Tony Stark said “I am Iron Man,” he got cheered. The second time, he died.

Think about that when you say, “I am a Christian.”

Bobby Neal Winters is associate dean of the college of arts and sciences and a university professor at Pittsburg State University. A native of Harden City, Oklahoma, he blogs at Red Neck Math and Okie in Exile. His last article for The Stream was I Felt Naked Without It, a reflection on marriage.

The Culture’s Gone Mad. It Won’t See Reason. What Do We Do?