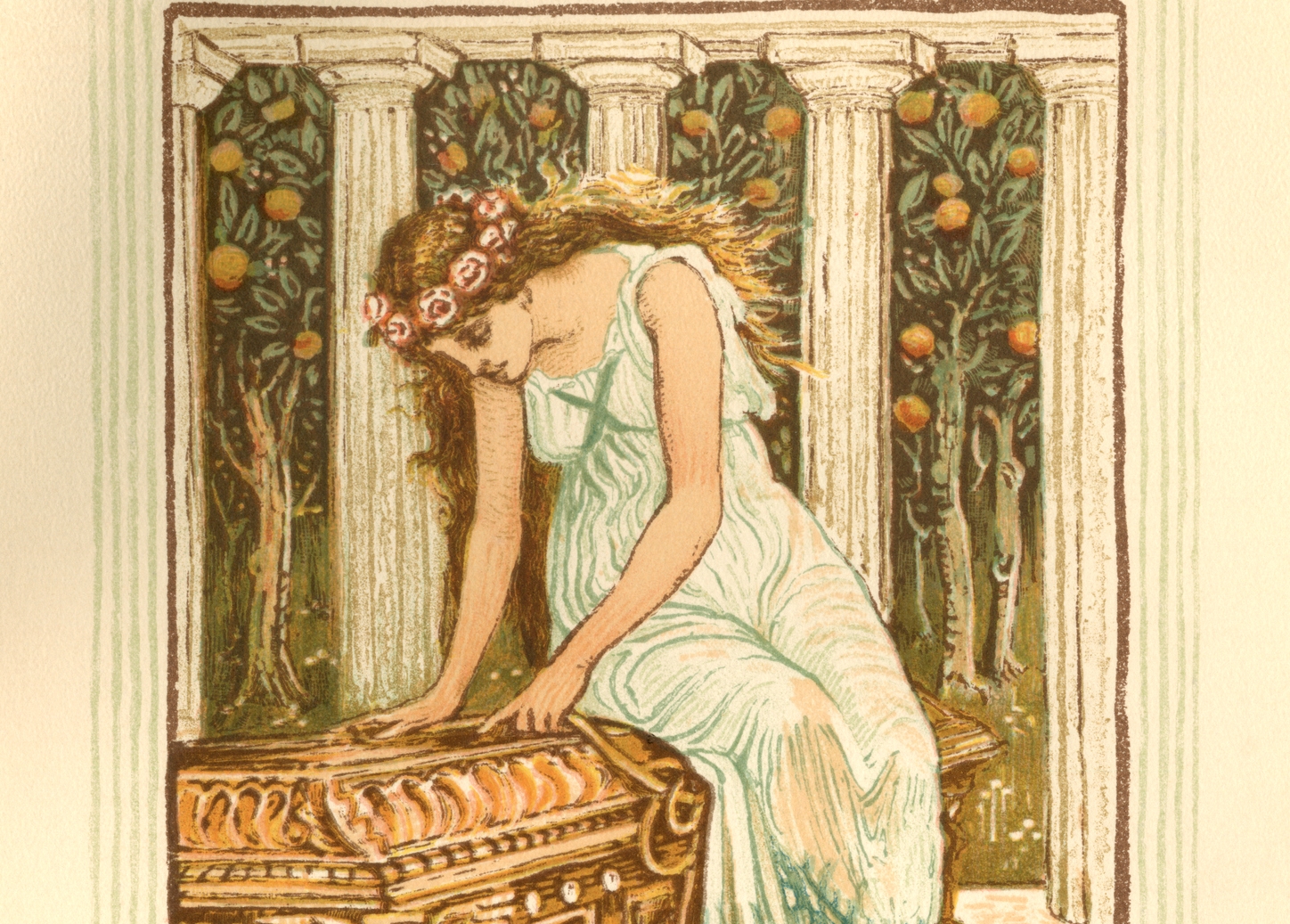 I’ll confess, I’m addicted to podcasts. I use them to lull me off to sleep at night. To make that possible, I need subjects that interest me, but don’t stir powerful passions. Otherwise I won’t drift off to slumber, but get upset instead. Maybe upset enough to jump out of bed and go read a few thousand words, especially if I disagree with the program’s point of view on something important. This means I can listen to podcasts on subjects that mildly interest me, where I have no dog in the race. So yes to Byzantine history, Greek and Roman legends, and details of World War II. No to shows that debate life issues, current U.S. politics, or the conflicts in my own church.

So I thought this was a safe bet: a show called “The Ancients,” which is part of a mostly excellent series of podcasts called History Hit. (It has a video station too, to which I subscribe.) The specific episode seemed especially harmless, since its subject was Pandora — the figure who in Greek myth was the first woman.

The guest was Natalie Haynes, a Classicist and comedian. (That’s a uniquely British combination, I think.) She’s author of a number of popular books, including a new one on Pandora. She is indeed wryly funny, urbane, and feminist in a world-weary, rather than strident way. (I later looked her up and saw that’s she’s also photogenic — the perfect media product and role model for Woke young women.)

Haynes went on “The Ancients” to correct the historical record on Pandora, whom she sees an example of women getting a raw deal in Western culture. She explained that in most of the ancient source material, Pandora is celebrated as the world’s first woman, period. There’s just one story, by Hesiod, which recounts how she got from Zeus a receptacle containing all the troubles in the world, which she opened, to all our misfortune.

How Christianity Ruins Everything

In Haynes’ account, this version of the story became popular (you guessed it) because of … Christianity. You see, it seemed to echo our account of the sin of Eve. As Haynes said wryly, “Of course, a beautiful woman is the source of all our problems.” The “misogyny” inherent in Christianity ensured that this detail of the Pandora story would be the one that painters depicted, and future storytellers repeated, indeed embellishing on it to make Pandora’s choice seem cruel and deliberate, rather than simply foolish. If only the West had avoided this tragic detour, she suggested, of Christian woman-bashing, and stuck with the healthy Classical attitude, the world would be better off.

Haynes was repeating the same narrative we’ve heard in 10,000 forms since the Enlightenment: a mourning of the golden days of Classical paganism, and wry disdain for the “dark ages” of Christian ignorance. Normally I’d just ignore this sort of thing, having been subjected to it so much that I’m almost desensitized. I just filter it out.

But Haynes wasn’t finished. She hadn’t yet gotten to her main hobby-horse, which is surely the “hook” that got her a nice contract for her recent book on the subject. Pandora had no box! That’s right. No box full of evils handed to her by the gods.

Instead, the Greek in Hesiod clearly tells us she had a “jar.” Not a box, a jar. It was still full of evils, and she still apparently opened it, but Haynes finds it vastly important that the word “jar” got mistranslated in the most popular version of the myth during the Renaissance. And the mistake apparently stuck. Most paintings and written retellings of her story after that feature a box, instead of a jar. I swear, Haynes talked for almost 20 minutes about this point.

And she knew who was to blame. The Renaissance scholar and author Erasmus had made this crucial mistake. Apparently his mastery of Greek was not quite as good as he’d imagined.

Somehow, Haynes seems to think that the jar/box distinction had vast implications. Erasmus, she informs us, is the main source of the misogynistic misreading of Pandora that bedeviled us ever since. But Haynes has come to set us free from it. Listen to one hand, clapping.

She Doesn’t Know What “Humanist” Means

At this point, it all seemed silly, but nothing to stay awake about. But Haynes still wasn’t finished. She said that it was especially strange that Erasmus repeated the woman-bashing version of the myth, since he “wasn’t even a Christian. He was a Humanist!”

At this point I was wide awake, and baffled. I listened through the rest of the show, awaiting some correction or explanation. She offered none, but ended the program with same blithe self-assurance she’d begun with.

You see, I studied Erasmus in college. A lot, as a Renaissance Studies minor. He was my favorite author, whom I wrote about for multiple term papers, and even took on as a role model in my Catholic humor books. Because Erasmus was a Christian — quite a devout one.

That’s why he wrote a spirituality manual, The Handbook of the Militant Christian. And a guide to the proper governance of a society, The Education of a Christian Prince. And a series of satirical dialogues savaging the corruption in the Renaissance church, such as “Pope Julius Excluded from Heaven.” And two books refuting Martin Luther’s arguments about free will and irresistible grace. And a long series of letters to his close friend, Thomas More, about the proper way to lead a Christian life. 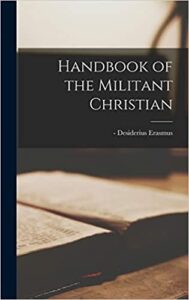 Erasmus also produced the first widely-published translation of the New Testament from the Greek since St. Jerome.

Erasmus’s Christian writings had helped stir up discontent with the legalism of the Renaissance Catholic church, and prepared the way for Luther — though Luther’s revolt would prove too radical for Erasmus, who stuck with the Catholic church.

I read Erasmus’s works in my late teens, mostly for pleasure. I’d assumed that every educated person knew about them — or at least those who published books that talked at length about Erasmus, as Haynes does. But apparently she doesn’t.

Even worse, Haynes apparently doesn’t realize that “Humanist” in the Renaissance sense was completely compatible with being a Christian. Virtually every self-styled Humanist reviving ancient learning was a committed Christian. Had she ever heard of Thomas More? Or Thomas Cranmer? Or John Colet? Or Philip Melancthon? Indeed, the leading figures on both sides of the Reformation divide were almost all Humanists. Only one or two prominent Humanists weren’t in fact Christians. We know their names because their flouting of the Church got them executed: Giordano Bruno by the Vatican, Michael Servetus by John Calvin. Those two largely stand alone.

Haynes apparently takes “Humanist” in the sense that it began being used by British atheists like Richard Dawkins in the 1970s and 80s. Then she reads back that meaning 500 hundred years, imagining fervent Christians like Erasmus as skeptical proto-Darwinists or something, because she’s confused on the meaning of words.

Now, this isn’t the place to explode the idea that Classical Greece was somehow kinder or more respectful to women than the subsequent Christian world. I’d think that all the girls who went totally uneducated (except in Sparta), or served as sex slaves, or married whomever their fathers traded them to, might beg to differ. It would only be the Christian world that largely abolished slavery, and insisted on female consent for a valid marriage, and created vast orders of highly educated nuns.

Nor will I harp on the fact that Adam’s sin gets equal treatment in Christian theology to Eve’s. Nor that Christian piety came to revere the Virgin Mary as an icon of goodness and kindness unlike any female figure in pagan myth.

All Too Typical of Sneering, Half-Educated Secularists

Instead I want to focus on the smugness based on ignorance that pervaded Haynes’ discourse. It is absolutely typical of secularist accounts of Western history, of the kind that pervade public education and elite colleges. No doubt that’s where she imbibed it. On how many other subjects are “experts” promoted by secular venues promoting ignorant falsehoods about Christian history and doctrine, to listeners who don’t happen to know better? I’ve seen it happen everywhere, from biology to politics. It’s the bread and butter of half-educated secularists around the world.

Let’s recap just this case. Haynes falsely chalks up to Christianity a new disdain for women which she pretends wasn’t worse among pagans. She falsely assumes that Christian Humanists were in fact like New Atheists. She ignores (or is ignorant of) the vast corpus of explicitly Christian works by Erasmus, the author about whom she affects to be so knowing.

But at least she can tell the Greek words for “box” and “jar” apart.