How We Beat Church-Bashing Rioters in St. Louis 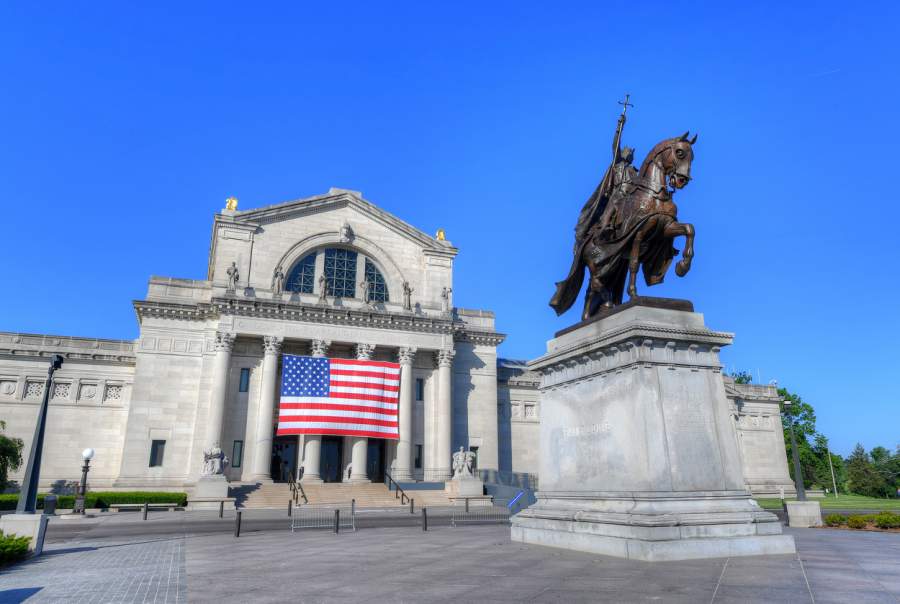 As a St. Louis Catholic, I’ve been under attack for weeks. So has my whole community. The cancel mob set its sights on our history and our culture, and it seemed unstoppable. The radical left started by smearing the reputation of the saint after whom our city is named: King Louis IX of France. He reigned from 1226-1270. He was the only ruler of France so exemplary as a Christian that he won the title of “saint.”

An Imitator of Christ

St. Louis was pious and prayerful from a very young age. Louis went off to pray at Mass in church at least once, sometimes more, each day of his life.  As king, he fought tirelessly for the poor of his kingdom. He ended the superstitious practice of trial by ordeal, and instituted the principle of innocent until proven guilty for all citizens of France. He founded universities, monasteries, hospitals, orphanages, houses for the poor and the blind.

St. Louis would invite the poor to eat at his royal table. He’d personally serve them, in imitation of Christ. I could say much more about this saintly king. The evidence of his sanctity and excellence as a leader on the national and international stages is overwhelming.

The Catholic Church does not grant sainthood lightly. It scrutinizes every aspect of a person’s life, and in past centuries appointed a prosecutor to look for hidden flaws. Only those whose lives demonstrated heroic virtue, and above all a love of God and love of his fellow man, make the cut.

The Cancel Mob’s Demand: Erase Yourselves

In the second week of June, cries arose to remove the great statue of St. Louis  which fronts the St. Louis Art Museum on Art Hill. So many Catholics of the city took notice. It is one thing to have a debate about the statues and names of various national and local heroes. Whether you favor remove such statues or not, most agree that such decisions should rest with the public, and legal civic authorities. The mob, of course, wanted to impose its will by force.

Various radical groups took up the cause of removing St. Louis. On one group’s website, we found that claim that he was a “rabid Anti-Semite who spearheaded many persecutions against the Jewish people.” Another charge: that St. Louis was “vehemently Islamophobic and led a murderous crusade against Muslims which ultimately cost him his life.” Therefore, the reasoning went, a man of such intolerance and hatred for those from diverse backgrounds and faiths deserved no honor.

But removal of the statue was not enough. These same activists called for the city of St. Louis itself to be renamed. (French explorers had named the city for their homeland’s past, sainted king.) They still weren’t finished. Any religion that could honor such a “vile” individual must itself be equally triggering. So the activists demanded all public references to Catholicism, including the names of streets, be expunged. Anything “Catholic” must disappear from public view.

We Catholics in St. Louis were stunned. We felt like standing on the edge of an abyss. Our history and identity seemed headed for the Memory Hole.

Talk to the Bullhorn

Catholics in St. Louis were stunned, and paralyzed at first. Would the statue of St. Louis come down violently, without any resistance, as happened to St. Junipero Serra in Los Angeles? How could we find the proper response?

We could try using reason. Maybe explain that such charges of Islamophobia and anti-Semitism against the saintly king are not warranted even by today’s standards. Some marvelous scholarship confirmed this over the past thirty years. We could try disseminating such information to the protesters.

Good luck with that. Any honest attempt to debate medieval history fails in the face of bullhorns and orchestrated screaming. Some speech turns out to be freer than other speech. An enraged mob is no place to cast pearls.

Our Power Is Prayer

Fortunately, the Catholic faithful of St. Louis are some of the most devout and committed Catholics one could ever hope to meet. They love their Church and will go through fire and water to protect their religious freedom. The city still boasts strong parish communities, Catholic universities, hospitals, religious foundations, monasteries, and a vibrant seminary. So we had the spiritual resources. We recognized the seriousness of the threat and decided to fight with the one weapon which will defeat cancel culture and the cries of the mob. We began to do what the Church has always done in times of severe attack: Turn to heaven in prayer.

We began to show up every evening around the statue of St. Louis at 6 p.m. We would the say the Rosary on our knees, on the hot pavement. We chanted medieval litanies, of the kind St. Louis himself prayed. We carried beloved statues of heroes of our Faith. Priests, religious, and seminarians from the archdiocese and from our local Latin Mass communities, acting on their own volition, showed up in cassocks.

Blessed Are You When Men Curse You

The activists showed up in a particularly fierce way on Saturday, June 27. They shouted at us and insulted us. Some wrote anti-Catholic graffiti on the ground and on the plinth of St. Louis’ statue. They called us evil. The activists announced to us that, once the statue is toppled, they are going after our cathedral. They blew bullhorns in our ears. They tried to provoke us to engage in some form of violence which could go viral on social media.

One heroic young priest took to the microphone and addressed the activists. He tried to explain why St. Louis was indeed a saintly man – he did an admirable job! – but he was soon shouted down.

The only violence was an attack on three of us. Two were diagnosed with concussions. Perhaps the reader doesn’t believe “a spirit of oppression,” where the atmosphere feels charged with hate and danger. Yet that spirit was what we felt and confronted.

Reports in some news outlets claimed that there were white supremacists of various kinds. That was a lie. They accused us of violence. Also, a lie. None of us raised a hand to anyone. We fully committed ourselves to nonviolent resistance and reliance on God.

Like a priest performing an exorcism, we remained focused. We continued what had now become a daily practice. Every evening, we gathered around the statue of St. Louis. After the rosary, various litanies, hymns, and sometimes processions of Our Lady, we quietly left. Our numbers generally increased each evening. The numbers of the activists decreased.

The activists demanded all public references to Catholicism, including the names of streets, be expunged. Anything “Catholic” must disappear.

There was to be one final spiritual battle. Word went out about a so-called “interfaith service” on Sunday July 12. It would happen at the St. Louis statue from 8 p.m. to 11 p.m. That’s well after the park closes. A three-hour long interfaith service? It sounded very suspicious.

Other clues emerged. The primary agitator from Saturday June 26 announced his “security team” would arriving around 7 p.m. That’s well before our Rosary would be completed. The police had placed a series of barricades around the statue establishing a large perimeter to keep any activists at considerable difference. Word on the street said that tonight the mob might attack the statue, not stop till it lay on the ground.

Over 500 Catholics, our largest crowd so far, showed up that evening to pray. The spiritual atmosphere seemed peaceful, even joyful. Many priests around the archdiocese of St. Louis were offering prayers at that time, in some cases with their congregations. We peacefully left. Not long after, about three dozen activists arrived for their prayer vigil. Their night ended with a whimper.

Lessons from a Saint, and a King

Our statue of St. Louis bears a message for times such as these. The saint grasps the sword not by the hilt but by its blade. He raises it to God as a gesture of peace. We in St. Louis have done nothing but imitate what the statue of our patron symbolizes. Let this be a model for believers around the nation whose statues, shrines, and churches are being defaced, removed, and burned.

As of this writing, the petition to take down the statue of St. Louis has stalled at 1078 signatories.  Of the two petitions to save the statue, one has 5754 signatories, another 51,877. The number of signatories for these latter two petitions are increasing by the day. Nonetheless our fight isn’t over. America needs much prayer. We shall continue to gather at Art Hill. And we will continue to pray for our city, our nation, and our world.