How to Stop Red States From Going Blue 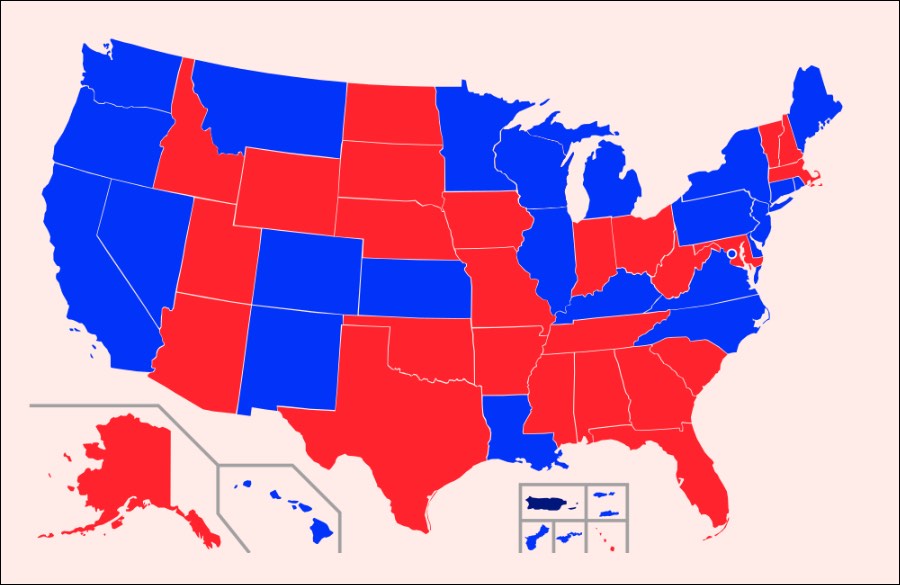 Red states/blue states by their elected governors, per Wikimedia.

COVID-19 has shown us how the progressives love power and hate personal liberty. Yet more and more states keep going blue. Why?

After they messed up California, progressives moved to Oregon, then Washington. Each time they voted for the same liberal policies that had driven them away from their home states. Remember when Colorado was a conservative haven? Now look at it. Is Idaho next? How about your state? How did we get here? And how do we turn the tide?

Here’s how that came to be, and what we can do about it.

Progressives moved to Multnomah County, Oregon in sufficient numbers to elect progressives to local City/County offices. Those progressives created new programs for low-income housing, where there wasn’t a need before. They built high-density zones and government assistance programs. Masses came to these magnet programs. They created a population boom.

Eventually those counties had enough mass to gain more voting power than the rest of the state. In Washington, nine counties control a majority of the seats in the capitol. Those nine control the other thirty. In California, three major areas, Los Angeles, San Francisco, and San Diego control the entire state. They have a veto-proof majority in Sacramento.

The Answer That Could Never Work: Seceding or Joining Another State

Some have proposed splitting states apart and leaving the red cities behind. Even if that were possible — which it isn’t, practically speaking — there would be bad news along with the good. These new states would be well managed financially, have better opportunities, be cleaner and wouldn’t have homeless sleeping on the sidewalks spreading health hazards. The liberals would want to migrate there and the vicious cycle would repeat itself —  until all of America is blue.

It’s exactly what’s happened in Oregon and Washington. Clean, sane Idaho is now a magnet for Californians. How long will Idaho last? Eventually Idaho will become another Colorado.

Then How Do We Stop This?

Is this an inevitable disease that will kill liberty in America? Yes, unless we can stop it from spreading.

In each state’s capitol, the State Assembly and the State Senate are appointed proportionately to the population of the state. So, as states’ liberal population grows in the city centers, those areas naturally end up with more assembly members and more senators, until they take over that state’s capitol. These population centers then control and run the entire state. Liberals attract more liberals and repel conservatives, so once the cycle sets in, there’s no stopping it. It feeds on itself and then spreads.

Now, you notice that’s different at the Federal Level. U.S. representatives are elected proportionally, (as California grows, other states lose representatives), but that’s not the case in the U.S. Senate. In the Senate, every state gets 2 senators. It doesn’t matter if it’s California with 37 million or Idaho with 1.8 million.

Why is this important? Because the founding fathers didn’t want the most populous states to control the country. It’s part and parcel of the Electoral College — which liberals are of course eager to abolish. But it’s a great balancing method for U.S. politics.

And it could be great on the state level, too. What if we could change a state’s Senate allotment? What if Idaho which is still conservative, passed a law stipulating that from now on, their state senators would be assigned at the rate of 2 per county, and not proportionally as in California. Then just as in D.C., the more populous counties could not control the entire state.

That way, even if Boise County became huge and grew to as many as 15 million people, they would only have 2 senators in their capitol. Idaho wouldn’t end up with just a few liberal counties making decisions for the entire state.

Not Such a Novel Idea

I thought this was a new genius idea until I started doing research on it. Here’s what I found.

Did you know that until 1964, all counties in all states had a fixed 1 or 2 senators per county in their state capitol? For instance, Los Angeles County in California had only 1 senator with 400,000 citizens, while Alpine County had 1 senator and only 400 citizens. But those 400 citizens could counter act any nonsense proposed by LA County.

This idea is not new. It was in fact the rule of law for almost 180 years of American history. And by it, states and counties were protected from the tyranny of mob rule.

Then in 1964, Reynolds v. Sims came to the Supreme Court. This was Justice Earl Warren’s court. On it were four of the justices who later gave us Roe v. Wade — the Court that discovered “a faint shadow” of privacy that allowed women to kill their unborn babies. As if you are allowed to kill anyone in private.

In Reynolds v. Sims, the Court decided to dictate that states had to be governed like a mobocracy. Warren and the seven other liberals on the court said “2 senators per county” violated the U.S. Constitution, because it wasn’t “one man, one vote?”

The logic of that escapes me. If the founding fathers wrote right into the Constitution that Senate should not have “one man one vote,” for the nation. How could it be unconstitutional for a state?

What if we could overthrow that court ruling?

It’s time now to test that ruling again. What if a Red State passed a law that went back to the original method? Then what if they were sued and it went to the Supreme Court. What if the Court reversed the 1964 decision? We don’t need amendments. We simply need a court with strict constructionists. If Trump wins, we will have that in 2021.

Once that passes, Red States could change their state senators to 1 per county. It could stop the tyranny spreading. It could protect their state. And it could help protect America.

Neil Mammen is an engineer during the day and teaches the historic and scientific defense of the truth of Christianity at night. His ministry is called No Blind Faith. He is an ordained evangelical pastor, and the author of multiple books including Jesus Is Involved In Politics! Why Aren’t you? Why Isn’t Your Church? and Who is Agent X? on how to prove God exists without using the Bible.