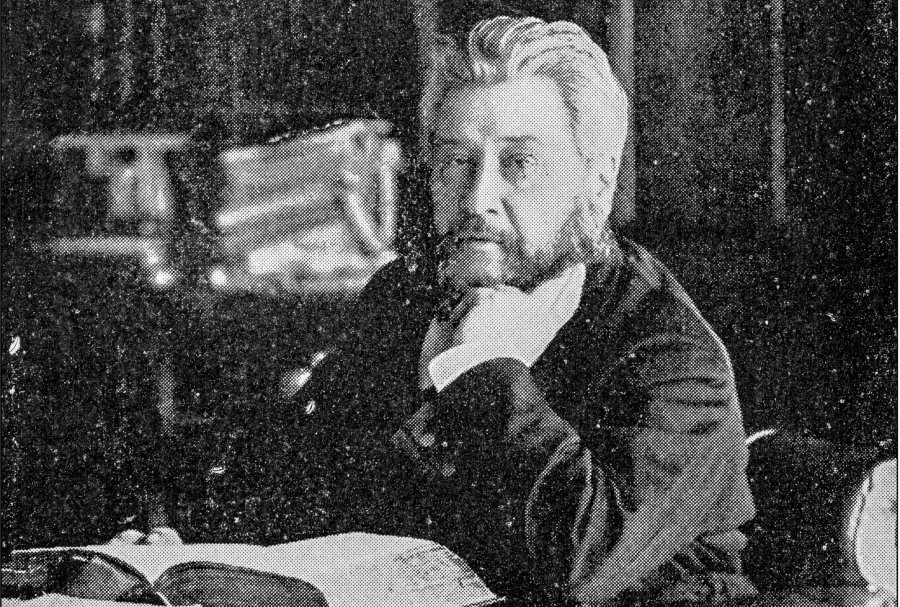 “A fool’s gun is soon fired,” wrote Charles Spurgeon, quoting an old proverb. He explained: “He has little to say, but he is in a desperate hurry to say it.” Here are some of the great preacher’s insights on how Christians should speak.

He wasn’t aways so sharp. But he knew that Jesus teaches that what comes out of the mouth can defile a man. How we speak has eternal significance. And with Facebook and Twitter …

The nineteenth century Baptist minister was one of the giants of his day. A great preacher and an industrious writer, he was also a leader of the Protestant Christians outside the Church of England. Very popular, when he died in 1892, at the age of 58, 100,000 people lined the streets of London as his funeral procession passed.

He is famous for admitting “I am perhaps vulgar.” He didn’t mean he was crude, as the word means today. He means he spoke the way the average person spoke, and used stories and jokes and other ways to help them hear the Gospel. “It is not intentional,” he said, “save that I must and will make people listen.” (The sidebar below gives more of his explanation of what he was trying to do.)

This comes out in one of his last books, published three years before he died. In The Salt-cellars, he gives hundreds of proverbs with his explanation of each one. He called it that because he thought proverbs were “salty.” He drew spiritual insights from these everyday sayings.

The proverbs are printed in boldface italics. In a few cases, he only quoted the proverb and didn’t say anything about it. The ones used here are only a sampling of those in the book.

Neither shoot without aim nor speak without thought
Or you may do as much mischief by a hasty speech as by a random shot.
Sometimes our words,
Hurt more than swords.

Never bray at an ass
Let a foolish person have the talk to himself. Do not imitate his folly. Your silence will be quite as melodious as his voice.

One lie makes many
One lie must be thatched with another or it will soon rain through. Lies breed like fleas or aphids.

Why did one of the greatest preachers of the century write a whole book explaining common proverbs? He always writes, Charles Spurgeon explains at the beginning of the book Salt-cellars, for “the spiritual good of my readers.”

A “lighter form” like proverbs may reach people essays and sermons won’t. “Godly sentiments sandwiched in between slices of wit and common-sense, may become nutriment for the soul, although they may be almost unconsciously received.”

He put moral instruction in the proverbs, as does everyone else. He put in “gospel instructions” too.

Spurgeon used proverbs as a taste of the truth and an invitation to find more of it. “The good hope abides with me that I may lure [readers] to better things by things which are themselves good. … Perchance, while amused with the wit and wisdom of men, some reader may perceive this glow of a diviner light, and may be led to seek after its clearer illumination.”

Never dispute about the wool of a cat
See if there is anything in a question before you discuss it, or you may make much ado about nothing.

Never say of another what you would not have him hear
This precept would put the extinguisher on many a tattler.

Needles are not sharp at both ends
We ought not to be all sharpness; we must have an eye as well as a point — judgment as well as courage.

Never wake a sleeping lion
Rouse not an angry man or woman. Don’t stir the fire of strife when it is dying out.

Never bite back at back biters
If you do so, they have caused you a serious injury of soul by bringing you down to their level. Leave them their miserable trade to themselves. “Bless them that curse you.”

Never let plain dealing die
If all the world should twist and twine,
Still be thou straight as plummet line.

Few men ever repent of being silent

One fact is worth a ship load of opinions
We don’t want to know how you think it ought to be; but tell us how it is. Religious opinions are fickle as the wind; but the facts of Scripture are firm as a rock.

A clear head is desirable; but a clean heart is essential.

Never write what you dare not sign
An anonymous letter-writer is a sort of assassin, who wears a mask, and stabs in the dark. Such a man is a fiend with a pen. If discovered, the wretch will be steeped in the blackest infamy.

Never speak ill of those whose bread you eat
Even a dog knows who feeds him. If he bites his keeper he is likely to be hanged and nobody will pity him.

A lie has no legs, and cannot stand; but it has broad wings, and flies far

One hard word brings on another
Do not open the ball. There is no credit in throwing the first stone, for you may be accountable for all that follow it.

One has need of much wit to deal with a fool
Because he misunderstands you, and if trusted, he will lead you into great blunders. It would seem that his folly is catching, for often if there is one fool in a business there is more than one.

No wool is so white that the dye cannot make it black
The best character will be injured by society. The cleanest reputation can be darkened by slander

Never mix mirth and malice
It is a sort of treachery to do so, like Absalom inviting Amnon to a feast to kill him.

Newspapers are the Bibles of worldlings
How diligently they read them. Here they find their law and profits [sic], their judges and chronicles, their epistles and revelations.

Never find fault with the absent
It is cowardly. Accuse a man when he can defend himself.

On their own merits modest men are dumb
Praise of self from a man’s own lips is loathsome.

Never flog the dead
They cannot be improved by your remarks, neither can they meet your charges. Let them sleep on. When an error is clean dead, do not go on disproving it, lest, like the boy with his top, you set it going again by whipping it.

No answer is also an answer
And it will be wise in many cases to accept it as such.

A loud horn may play a poor tune
It generally does. Loudness is a foe to melody. He who blows his own trumpet with great vehemence is almost always a fraud.

Never comb a bald head
Don’t criticize where there is nothing to work upon. Treat a poor helpless man with tenderness.

Never grumble nor mumble
Take things as they come;
Eat crust as well as crumb.
As for mumbling, when men are making a complaining speech, they generally talk so fast that they eat one half of their words and whistle the rest. It would not matter much if they whistled, all of them, for they are not worth much.

Once shot you cannot stop the arrow
“A word once spoken can return no more;
A wise man sets a watch before the door;
The bird in hand we may at will restrain;
But being flown we call her back in vain.” — Whitney

Nobody can repeat it if it is not said

Of the dead say only what is good
And if nothing good can be spoken, say nothing, but conclude — Seeing he is dead,
No more shall be said.

Nothing that is violent is permanent
The rushing torrent is soon over, and so is it with other things of the same impetuous character. Gently goes far.

Never commit what you would wish to conceal
Do [and say] only that which will bear the light of day.

Never argue for victory, but for verity
Controversy would wear a very different complexion if this were observed. We ought to fight for truth not for party.