How to Shift to a Fasting Lifestyle: Week One

This is the seventh piece in a series on how to develop a fasting lifestyle. Read the entire series here.

Many of you reading this series are ready for me to get down to business. I know because you’ve posted comments on Facebook and sent me texts saying, in effect, “Enough already with the throat clearing. Tell me what to do!”

I hear you. So, in this piece, I’ll explain what to do for the first week to help you shift to a fasting lifestyle. Taking a cue from Lent, this startup phase is part of a 4-5 week plan. You could draw it out over 2-3 months if you prefer. Or, you could compress it and do the whole thing in a week, but that’s not a great idea.

(1) Are you a child, severely underweight, pregnant or nursing? Then you probably shouldn’t fast. Do you have Type 1 or 2 diabetes, take hormones or have metabolic problems? If so, check with your doctor about fasting. You should find a doctor who knows about fasting and ketogenic diets, beyond what he or she picked up in the lounge in medical school. (Here’s a list of such doctors.) Myths and prejudices are as common among physicians and nutritionists as they are in the general public.

(2) If you have severely high blood pressure, talk to your doctor.

(3) I’m not a physician, so you should not take what follows as medical advice.

(5) I think this method is the best one for most people most of the time. Otherwise, I wouldn’t commend it. But humans are complicated, so your mileage may vary.

(6) I don’t propose a vegan or vegetarian diet, but I know there’s more than one path to the fasting lifestyle (which is our goal). When I was thirty, I ate a very low fat, high protein, high complex carb diet. I was as fit as I’ve ever been. (I was also hungry all the time and found fasting very hard.) The Okinawans are famously healthy, even though for decades they’ve eaten a high carb, low fat (and low sugar) diet based on white rice.

(7) I can’t give all the reasons and background evidence for the steps, without turning this series into a book. So, check out the links for background information and evidence.

Hide the scale. You’ll be busy changing the macronutrients in your diet: that is, the fats, proteins and carbohydrates.

The basic rule for this week is simple: Natural fat is your friend. Sugar, simple carbs and starches are your enemies. For the next few weeks, you will abstain from them.

Get most of your calories from fat (at least 75%). Get as much protein as you need, but no more than 20% of total calories should be protein. Get only a tiny amount from carbs (about 5% of total calories). You should keep your total carbs under 50 grams a day. If you’re insulin resistant, you may need to keep it below 30 grams.

That means, for carbs, you should stick with green vegetables that grow above ground.

No starchy plants or beans.

No sweet fruit (for now).

You’ll even reduce your use of artificial sweeteners. If you need something to taste sweet, use a little liquid stevia. I’ll explain why later.

As the foundation of your diet, eat natural fats such as coconut oil, olive oil, butter, heavy cream, full fat sour cream, and ghee (clarified butter). Whatever you prefer. Scoop it into your coffee and your tea. I don’t mean milk or half and half. I don’t mean yogurt. I mean butter and cream. Whip the cream if you want, but don’t add sugar. (I have a dairy intolerance, so I use coconut oil and coconut cream.)

Eat fatty meats. If you eat chicken, include the skin and the dark meat. Fish? Cook it with oil. Bacon? Keep the fat. Hamburger meat? Skip the 93% lean. Go for the 70% lean, which is 30% fat. Fry it in a skillet so you won’t lose the fat. Do the same with steaks and sausage.

Eat eggs cooked in natural oils. No eggs white omelets. Eat the whole egg plus the fat it’s cooked in.

You can eat high-fat plants such as avocadoes and olives, as well as nuts such as pecans, macadamia nuts, walnuts, and almonds. And high fat cheese. But not too much, since these also contain protein and some carbs.

If you’re like me, you’ll resist the call to eat more fat. You’ll think: “If low carb is good, low carb and low fat must be better.” You’ll want to pick the fat off the bacon (a thirty-year habit for me). You’ll want to keep your protein too high relative to fat. You’ll want to pull the greasy skin off the chicken and eat a skinless grilled chicken breast. Don’t do that.

Or, maybe you’re not like me, in which case you can just enjoy yourself.

Cook spinach, bok choy, celery, broccoli, kale and other leafy greens in your favorite natural fat. For cooking, pick fats that are solid at room temperature, such as coconut oil or butter.

Avoid manufactured “vegetable” oils — canola, soy, corn, rapeseed. They have problems. They won’t kill you in the short run. But the best thing that can be said for them is that there’s no good reason to consume them. (The claim that they’re healthier than natural fats is doubtful at best.)

You don’t need to make weird, low-carb substitutes for potatoes, pasta and bread. Fats, meats, and vegetables are actual foods that people eat. Focus on those for now. That said, there are thousands of great recipes online for those following a “ketogenic diet,” which is what this is. You can make some of these recipes to add a little variety. See here and here and here.

Why Am I Doing This?

Why lose the carbs and raise the fats? It will shift your body’s metabolism to fat-burning, which you’ll need for serious fasting.

Here’s a super simple summary of a very complex story. Forget the calorie-is-a calorie myth you learned in school. This might be true as far as the physics is concerned, but it’s irrelevant. It ignores the fact that the body isn’t an inert system. It responses and adapts to inputs. Calories-in affect calories-out. Plus different foods do different things to our bodies. A hundred calories of table sugar and a hundred calories of spinach just aren’t the same thing.

Your body uses hormones to control what it does with food. A key player in this story is insulin, a hormone released by your pancreas. One of insulin’s jobs is to keep your blood sugar (glucose) levels from getting too high. It’s a gatekeeper: It tells your body whether to store extra sugars and fats as body fat, or to burn fat from your diet and fat stores for energy.

Carbs raise your blood sugar and so provoke an insulin response. That includes starches, such as corn and potatoes. Some carbs, like sugar and refined grains, really spike blood sugar and insulin. When sugar enters the system, the pancreas deploys insulin to send the sugar into your liver and muscles. But they can hold only so much. The spillover ends up being stored as fat.

Leafy green vegetables have carbs, but these plants are mostly water and fiber by weight. Their fiber and other carbs take your body a long time to process, and so they don’t raise your blood sugar or insulin much. In fact, they probably keep your blood sugar and insulin lower over the long term.

Protein is not a neutral party here. It also raises insulin, though not as much as carbs. And the effect is muted if the protein comes into your system with plenty of fat and fiber. So, long story short, you should eat enough protein to meet your needs, but no more. That will likely be at least 1/2 gram per pound of ideal body weight. It could be as high as 1 gram per pound of ideal body weight, but only if you work out hard, five or six times a week.

That’s why, for now, you want to avoid too much pure protein, as with chicken breast and canned tuna. If you eat these, mix them with natural fat.

Here’s a new food pyramid to help you remember. Print this out and put it someplace near the food in your house. 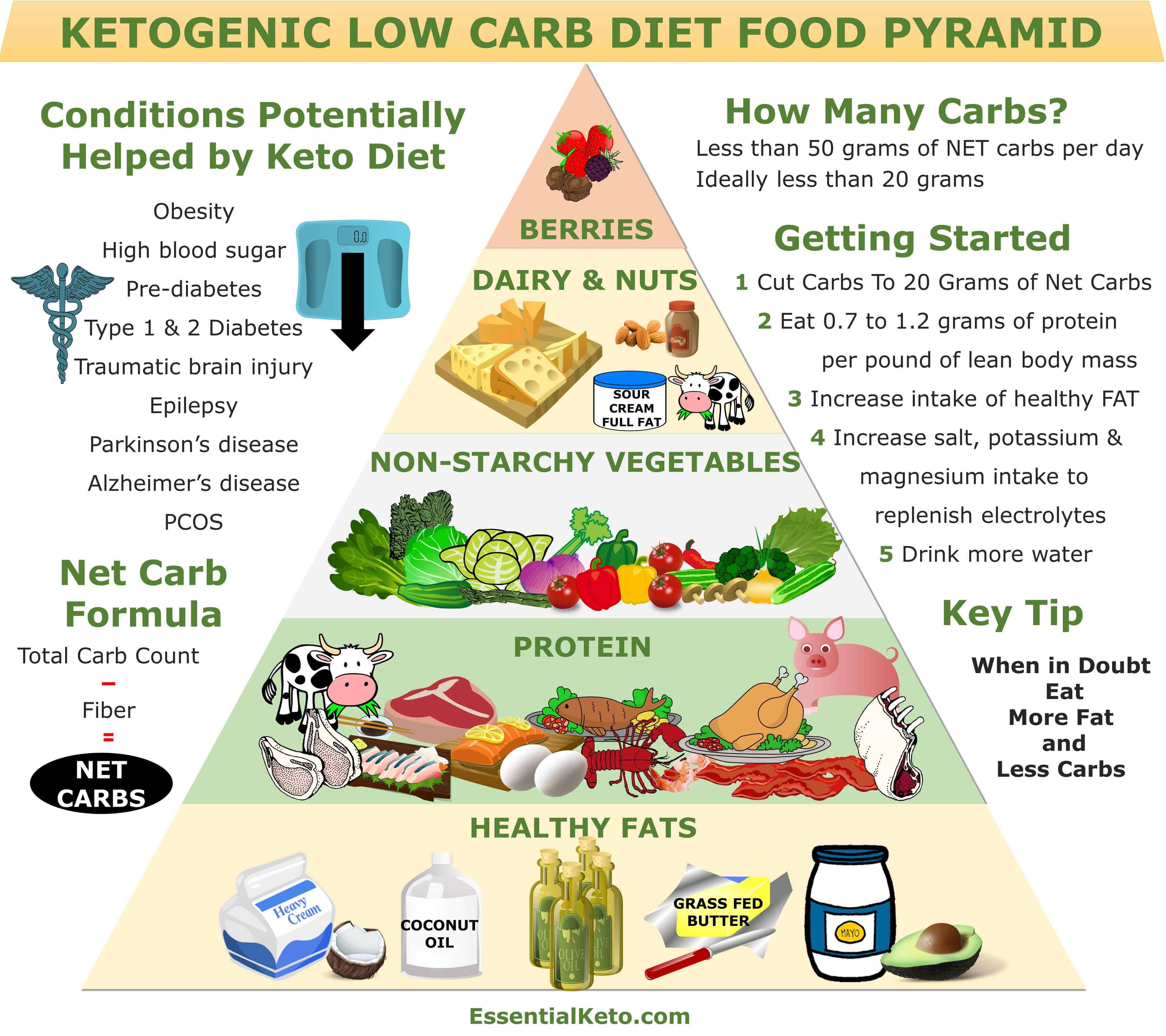 Lots of Water and Salt

A couple of other things to keep in mind: You need to drink a lot of water. The experts often say eight, eight-once glasses a day. I drink more than twice that: a gallon of water a day, not counting the water from foods, coffee, tea, and broth.

This plan is based on solid science, years of clinical practice from informed physicians and nutritionists, and the testimony of thousands of self-experimenters, including me. For most people, it will work and you’ll be healthier for it.

To do this, though, you’ll have to ignore the busybodies who tell you you’re clogging your arteries and killing yourself. If possible, don’t tell them what you’re doing.

If you still hear their voices inside your head, then get a complete blood panel beforehand, and then another a couple months after you’ve started this.

You can also do an NMR Lipoprofile test, which gives more of the relevant details.

Besides water, you need to bump up your intake of salt. Add extra salt to your food. Put a pinch in your water. Drink chicken bouillon. You can even add salt to your coffee and tea. Don’t knock it ‘til you’ve tried it for a few weeks.

This is very important. When you’re on a high carb diet, your body holds onto water. When you ditch the carbs, out goes the water, and with it, electrolytes like sodium, potassium, and magnesium. Especially at first. Millions of people who have tried the low-carb Atkins diet over the last several decades felt flu-like symptoms. They thought dizziness, nausea, and headaches were just part of the process. You should expect some trouble when switching your fuel source. But you can avoid much of this “ketoflu” by guzzling water and boosting your salt. (I also supplement with magnesium, potassium and calcium.)

Why hide the scale? Because right now, you’re learning how to fast, not lose weight. You will probably lose weight this week, even as you increase your fat intake. But it will mostly be water weight. (Jim Gaffigan has some insights on this.)

That’s it. It’s just the beginning. But you can do it.

Next up, I’ll explain more of the logic of this approach.