How to Be More Christian™ Than Jesus. It’s Easy! 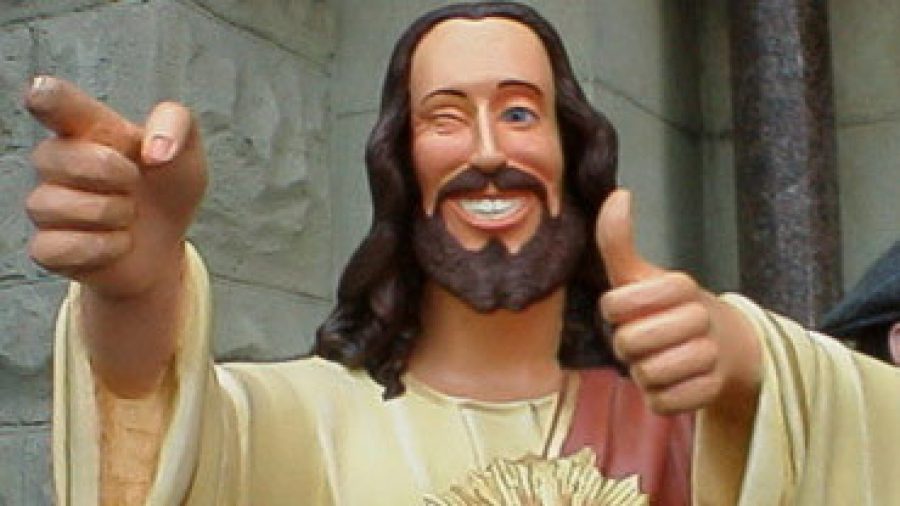 There are few pastimes more satisfying than proving you’re just a little bit More Christian™ than your neighbor. You know what I mean. Just a tad more forgiving, or modest, or chaste, or generous. We all have our own little trumpet we keep ready at hand, which we’re tempted to blow while giving alms.

We read that verse where Jesus said, “They already have their reward,” and it made us jealous. And we want our reward now, too.

We’re like those people who won a court settlement or lottery prize that pays out over the long term. But we see an ad by J.G. Wentworth running every ten minutes on World’s Dumbest Thrillseekers, that offers us “Cash Now!” Sure, it’s pennies on the dollar. But we can have it now! And that vacation to Branson isn’t going to take itself…. You only live once, if that. Or, as I’ve often observed from my perspective at 5’6”: Life’s too short and so am I.

But some of us do even better. We reap even larger rewards, at the push of a button on Facebook and the cherry-pick of a bible verse. All we need to do is to show that we’re More Christian™ than Jesus. Doesn’t that beat outshining your neighbor or your pastor, surpassing your actual Savior? No wonder so many people have done this over the centuries.

It’s easier than it sounds. If you want to be More Christian™ than Jesus, you need to jump through just a few intellectual hoops. Let me show you how!

Show Jesus Abolishing the Law and the Prophets

The first major doctrinal innovation (some sniffed that it was a “heresy”) in the history of the Church was the doctrine of Marcion. A zealous convert, he was also a little impatient. He found it tedious and futile to try to harmonize the Old Testament and the New. To sift through and find, as the Church’s bishops were doing, what was forever binding in God’s first revelation and covenant, as opposed to what Jesus had already fulfilled.

Marcion saw no reason to bother. He listened to the “wise ones” (Gnostics) all around him. They taught that whoever had created our world full of suffering, injustice, slavery and war was either actively evil or clearly incompetent. Jesus was the agent of some higher God, who’d played no part in Creation, and never spoken to the Jews. The “Yahweh” of the Old Testament wasn’t Jesus’ father. He was the cosmic tyrant, from whom Jesus came to save us, and bring us a higher law utterly different from Moses’.

All we need to do is to show that we’re More Christian™ than Jesus. Doesn’t that beat outshining your neighbor or your pastor, surpassing your actual Savior?

To support his brave new idea, Marcion compiled his own canon of scripture. It snipped off like a foreskin the whole Old Testament, and much of the New. He only kept the parts that seemed to him, well … inspiring. That matched his sophisticated theories, supported by modern scholars (the Gnostics). In response, the bishops excommunicated him, and drew up their own canon of scripture, which is still in use today.

Let the Spirit Erase the Letter

Marcion’s movement disappeared. It went underground. His method has proved a handy, go-to tactic whenever a group of Christians wanted to free itself to think bold, exciting new thoughts. Uplifting, inspiring thoughts that the Church had already rejected. For instance, absolute pacifism, the rejection of capital punishment, and the end of private property. A great article at Providence Magazine dissects the latest, most elaborate effort to annul the Old Testament’s letter in favor of one scholar’s notion of the spirit of the New.

The scholar Hans Urs von Balthasar wrote about how the secularizing thinkers of the Enlightenment wanted to win over Christians. These philosophical radicals liked what they called the “spirit” of Christianity, but wanted to blot out the letter. They kept running up against orthodox takes on scripture that blocked their road to Utopia. Such readings of the New Testament interpreted it through the Old. They harmonized Jesus’ teachings with the Father’s, preventing radical interpretations that suited the fancies of armchair social engineers.

So those Enlightenment thinkers adopted the spirit of Marcion. They painted Jesus as a liberator from the harsh, inhuman norms … of His very own father. They weaponized anti-Semitism to help sell their case to the reading public.

Progress Beyond Even Jesus

But you don’t need to stop there. In fact, if you really want to be More Christian™ than Jesus, you can’t. There’s too much Jesus said or didn’t say, and did or didn’t do. The actual text of the New Testament, too, conflicts with your secret project: making friends-with-benefits of the Mammon of Iniquity. Gaining the approval of bi-coastal elites, billion-dollar foundations, or even your “polyamorous” roommates in college. Avoiding at all costs being lumped in with obnoxious “fundamentalists” with bad hair who listen to really lame music.

To manage that, you need to go past the dead letter of Jesus’ own words and deeds, to find their secret spirit. Wise modern scholars (just like the Gnostics) are eager to help.

At every point where the Gospel itself stands athwart the project of postmodern sexual freedom and this-worldly salvation via the government, Marcion shows up, smiling. Surely, he suggests, that if Jesus were alive today, He’d approve of:

All these are the stances you need to take to make friends these days, to gain the respect of the “wise ones,” and in some places to avoid the ire of Caesar. Surely that’s what Jesus expects of you, isn’t it? No, it’s not part of what He literally said. But Marcion has taught you how to read between the lines.

In fact, you’ve learned by his method how to construct your very own Gospel. Though you never quite make it conscious, you live by a New Testament story that’s visibly different from the dusty old text that monks once copied in their dank, candle-lit cells. In your fresh, new postmodern Gospel (which fits its spirit much better, the wise ones assure you) Jesus was busy all right.

Now that’s a Gospel that’s not going to get you in any trouble. I think we can all agree that by the highest academic standards, and the words of the wise ones, it’s a good deal More Christian™ too.