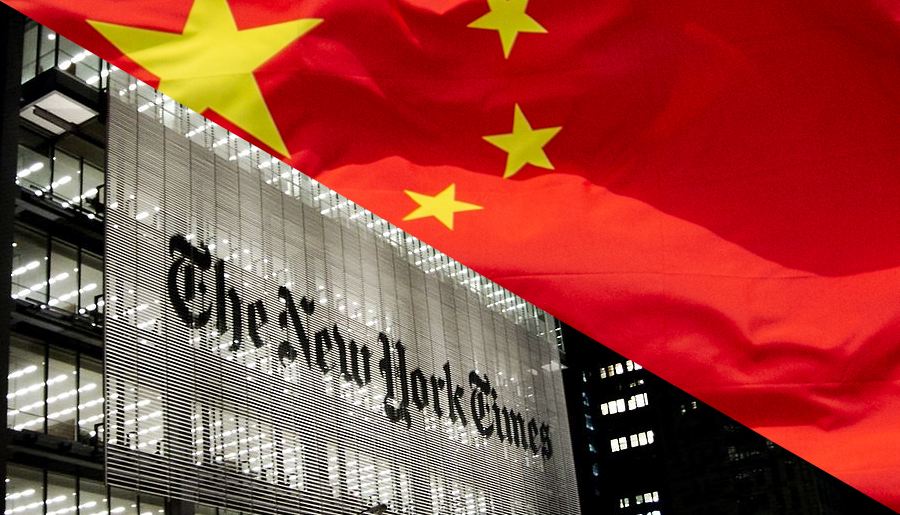 If democracy dies in darkness, as the Washington Post proclaims, the corporate media giants are the ones flipping off the lights.

By doing so, those giants help a government that seeks to destroy the United States.

The Post, the New York Times, CNN, NBCUniversal and many other large media corporations forged business relationships with Chinese companies. Those companies are affiliated with the Chinese Communist Party (CCP). Meanwhile, major outlets participate in a cultural-exchange program funded by that party.

As a result, those outlets mold opinion to fit their own interests, not the public’s.

“You often see representatives from American companies with financial ties to China naturally become defenders of the CCP’s policies and spreading the CCP’s propaganda,” said Helen Raleigh, a certified financial advisor who emigrated from China.

CNN also does lucrative business with China. WarnerMedia, which owns CNN, invested $50 million in China Media Capital. This firm is linked to the government. Jeff Zucker, CNN Worldwide’s president, also works with Turner Sports to produce and sell programming. Turner Sports’ biggest client is the NBA, which earns about $500 million a year from China.

How Much Does Truth Cost?

ESPN’s senior news director, Chuck Salituro, ordered commentators to focus only on the incident’s ramifications for basketball, Deadspin reported. Stephen A. Smith, one of ESPN’s most controversial personalities, took appeasement to new depths on his radio program:

Daryl Morey … what were you thinking speaking up on this issue? You don’t just think about yourself before you act. That’s what boys and girls do. That’s what children do.

Daryl Morey had an obligation to think about the Houston Rockets organization and about the National Basketball Association before himself. You have an obligation to adopt and embrace the interest of those you collect a paycheck from.

It Costs Too Much for Bloomberg

Bloomberg LP went even further. In 2013, it killed a Bloomberg News investigation. The investigation covered corruption involving Chinese President Xi Jinping, his family, and Wang Jianlin, a real-estate billionaire and China’s wealthiest man at the time.

In a conference call NPR obtained, Matthew Winkler, Bloomberg News’ editor-in-chief, told his staff the story would “wipe out everything we’ve tried to build there.” It would motivate the CCP to “completely shut us down and kick us out of the country.”

Bloomberg LP sells its proprietary terminals to China and finances Chinese companies through one of its bond funds. In November 2019, that fund began sending $150 billion to 364 firms. Of those, 159 are controlled directly by the government or the party.

Michael Bloomberg, the company’s founder and former New York mayor, views China as pivotal to increasing his power. Bloomberg seeks to use his annual economic conference in Beijing to surpass the World Economic Forum’s influence.

What about the Washington Post? That self-proclaimed torch bearer for democracy offers subscribers a weekly advertising supplement, China Watch, which the CCP publishes. The New York Times and the Wall Street Journal also provide that supplement.

The Post also ranks among numerous influential outlets targeted by sophisticated public relations. For more than a decade, the China-United States Exchange Foundation (CUSEF) has organized junkets to China, where reporters can visit military bases and businesses.

CUSEF also plans meetings and private dinners for journalists with its officials. It does this through BLJ, an American lobbying firm representing the foundation.

Those journalists work for the world’s most prominent outlets. They include the Los Angeles Times, BBC, ABC News, MSMBC, Forbes, Reuters, Time Magazine, Newsweek, The Atlantic, The Economist and Financial Times. Besides the New York Times and Wall Street Journal.

The CUSEF is linked to the CCP through the United Front, a party network. The United Front works overseas “to co-opt and neutralize potential sources of opposition to the policies and authority” of the CCP. The network encourages its targets “to take actions or adopt positions supportive of Beijing’s preferred policies,” the U.S.-China Economic and Security Review Commission states.

The CUSEF was founded by Tung Chee Hwa. He’s the vice-chairman of another organization within the CCP, the Chinese People’s Political Consultative Conference, another organ of the United Front.

L. Lin Wood has won defamation cases against several of these same media giants for their slander of Richard Jewell and former Covington Catholic High School student Nick Sandmann. Currently he’s helping battle the fraud in the 2020 election. He bluntly describes some of the less genteel ways China gets cooperation.

“If you go to China, if you go to Russia, they’ll take you out and give you some drinks,” Wood said on Clay Clark’s Thrivetime podcast Dec. 30. “Next thing you know, you’re on video tape with a young woman. From that point on, they own you.” (Emphasis in recording.)

Regardless of their methods, Wood believes the Chinese have planted a strong beachhead in the United States. One they will fight to expand.

Given the news since March — and given professional journalists’ refusal to challenge the Chinese menace — who’s to say Wood is wrong?