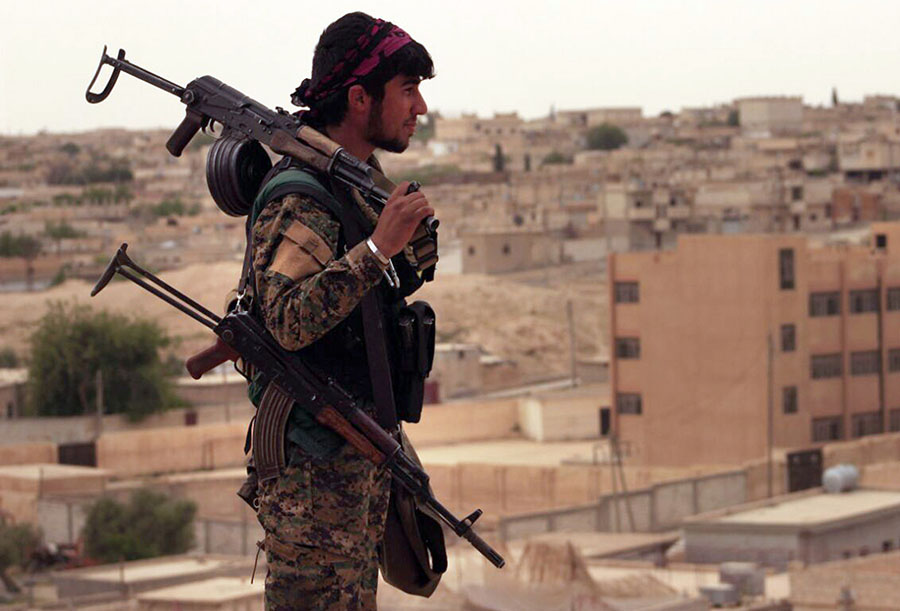 Turkish President Tayyip Erdogan lied to President Trump. Big time. He offered false terms for the deal Trump made to pull U.S. soldiers out of the way of Turkey’s push to ethnically cleanse northeastern Syria. Now the truth has come out.

So the president has every reason to yank Erdogan’s leash. And to stop this destructive assault on Syrian Kurds and Christians. Before it sparks renewed civil wars in both Syria and Iraq. Because Erdogan deceived him, Trump can force him to the negotiation table for a “Trump Deal” that will end this war between Turks and Kurds.

Here is what happened and how President Trump can win in Syria.

In an Oct. 6 statement, the White House said Turkey would be “responsible for all ISIS fighters in the area captured over the past two years in the wake of the defeat of the territorial ‘Caliphate’ by the United States.”

Within four days, Turkey went back on its word. On October 10, the Turkish Minister of Foreign Affairs, Mevlut Cavusoglu, changed Turkey’s story. Now the Turks would only take care of the ISIS fighters it found close to the border in the Turkish “safe zone” (i.e., killing zone). The night before that, the Turkish Minister of Domestic affairs told the Turkish media the real story: there are practically no ISIS prisoners in the killing zone anyway. He said, “There is one small camp type thing that is not significant.”

President Trump sits at a table full of lemons. But he can make it into delicious lemonade that serves American interests and helps his next campaign.

In other words, Erdogan lied to Trump. Not on some minor matter, either: Stopping ISIS was the whole point of U.S. intervention in the first place. Imagine that Britain, on the eve of the Normandy invasion, had informed General Eisenhower it wouldn’t in fact be engaging German forces. What a valuable ally!

Even worse, from a moral point of view, was Erdogan’s next lie. He promised Trump that he would not hit the Christians of Northeast Syria, or indeed any civilian centers. But Erdogan did exactly that. In its supposed hunt for Kurdish “terrorists,” Turkey bombed Christian neighborhoods in Qamishli over and over, killing Syriac Christian civilians. Turkish NATO jets bombed the areas around Derik, and other Christian villages.

In a gruesome irony, the Armenian Christians of Tal Abiad had to flee the Turkish assault (as confirmed by the Armenian government). These descendants of those who survived Turkey’s Armenian Genocide are once again running from the Turks.

The Christians of North-East Syria are frightened but stand defiant. The Christian units of the SDF, the Syriac Military Council, wait at the border to fight the Turkish onslaught.

Meanwhile, Erdogan is doing his best to humiliate the United States for Trump’s September 23 pledge that he would support religious freedom and protect persecuted Christians.

A Third Lie: Turkey Calls this a Jihad

“This is not just sort of a terror campaign against what they call terrorists. This is in many ways a jihad. The director of Turkish religious affairs is asking today in the mosques of Turkey — about 84,000 of them — to pray from Surah number 8 in the Koran — conquest prayers.”

“And as we’ve reported before, there’s a pro-Erdogan newspaper that said to ‘go tell the unbelievers that the army of Mohammad is coming,” Mitchell explains. “They see this as a jihad. This is not just a campaign to take away a terrorist haven as it were. This is a jihad against the unbelievers including the Christians, the Yazidis, and the Kurds. And so that’s what we’re witnessing right now.”

This makes President Trump an unwitting enabler of jihad. It’s hard to believe that was ever part of his plan.

So the Turks lied to Trump, and now their war is underway. Is it too late to save American credibility? To ensure that future potential allies don’t think of Kurdish graveyards, and ally with Russia or China instead (forcing the U.S. to fight really necessary wars all by itself)?

No, it is not too late. Erdogan lied, so the deal should be off. Trump can say that and he should, as soon as possible. That will save face for him in the wake of a bad decision that was premised on trusting an Islamist dictator.

He need not put U.S. soldiers back in harm’s way. The Kurds can fight their own battles on the ground, so long as NATO jets aren’t pounding them from the air. The one thing Syrian Christians and all the civilians of the region want is a No-Fly zone along the Turkish-Syrian border.

In fact, such a zone already exists: Russian and Iranian jets avoid the region to avoid getting shot down by the Americans. The U.S. simply needs to add Turkey to the menu of outside actors forbidden to bomb Syrian towns.

That would force the Turks back to the negotiating table. It would make room for “the Trump deal” between Kurds and Turks. Such a deal would change the Middle East for the better forever. President Trump wants such a deal, as he has said. But it will never happen unless he grounds Turkish planes from bombing Syrian Christians and Kurds.

There’s one more way such a plan could turn Trump’s decision from a wound into a win. Trump’s sudden decision to move U.S. troops accomplished one thing. It stunned America’s do-little European allies. (I witnessed the shock in the Dutch Parliament first-hand and heard similar reports from all over Europe.)

Forcing Europe to Defend Itself

Trump showed them the price of expecting America to pull all the weight in the region. Countries that face up to 3.6 million more Syrian immigrants (as Erdogan thuggishly threatened) now know they need to act in their own self-defense. If President Trump asked Europe now for help with this crisis, he would get it.

A Big Win for Trump, America, and Religious Freedom

President Trump sits at a table full of lemons. But he can make it into delicious lemonade that serves American interests and helps his next campaign. Trump can emerge as the dealmaker who forced intransigent enemies to negotiate. He can slap down President Erdogan for lying to him, man to man. The U.S. can lock down ISIS prisoners, safe in SDF custody, and prevent the collapse of Iraq. He can lock out Iran, which hopes to pick up the pieces of two shattered neighboring countries, then fire those pieces at Israel.

Trump can also keep his promise to a key part of his base, that he would protect religious freedom. And the president can also justly boast that he forced the Europeans to bear some of the burden in protecting their own countries. That’s something Trump has complained about for decades.

This is what Trump himself might call a “big win” and a “sweet, sweet deal” for him and his country. Let’s tell him and hope he listens, and pray for the victims of war.