How Do You Solve a Problem Like Nick Fuentes?

Bonkers Kanye West let this online anti-Semitic troll tag along with him at a dinner with Donald Trump. 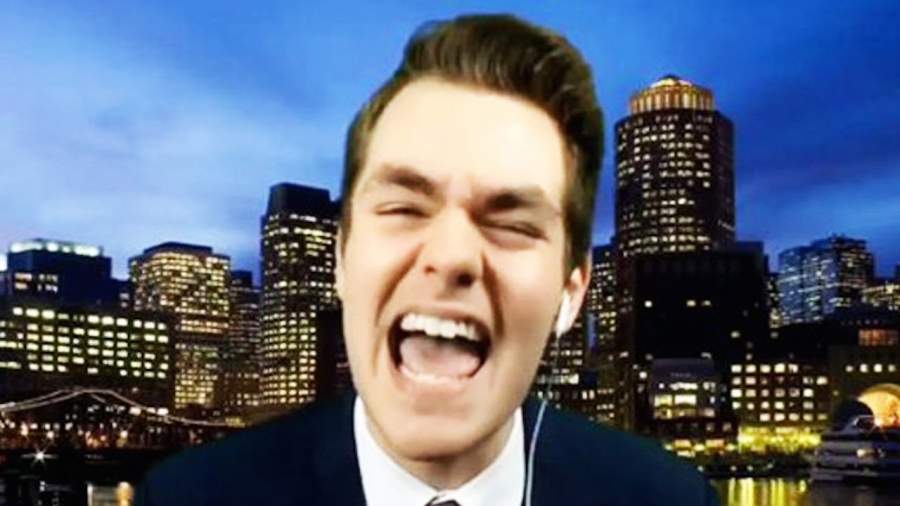 The Zionist Organization of America, fresh off awarding Trump its Theodor Herzl Medal at a gala ceremony Nov. 13 in Manhattan, released a statement on Sunday calling for the 45th president to condemn “in the strongest possible terms Jew-hater Kanye West and avowed holocaust denying, white supremacist, Jew-hater Nick Fuentes.”

“ZOA deplores the fact that President Trump had a friendly dinner with such vile antisemites,” a statement from the group read. “His dining with Jew-haters helps legitimize and mainstream antisemitism and must be condemned by everyone.”

Most of us have seen The Sound of Music, so we remember the song:

Well, I adapted the lyrics a little. Still you should watch this clip from that delightful movie to put yourself in the proper spirit for considering the question.

Deez Nuts Was a Statesman by Comparison

The notion that he was at dinner with a former (and aspiring) U.S. president appalls me. But it also tickles my keen sense of the absurd. It touches my nihilist side, which led me at first in 2016 to support not Donald Trump but the teenage boy who got on several state ballots under the sobriquet “Deez Nuts.” Mr. Nuts did not make the debates, which was sad, since Lindsey Graham and George Pataki richly deserved to share a stage with him.

Of course, I’m being unfair to the future Maria von Trapp, whose discontent at a convent was caused by her real vocation to become a devout wife and mother (and courageous anti-Nazi). Nick Fuentes, by contrast, apparently missed his calling as a recruiter for pyramid schemes, a salesman of shoddy wheelchairs to old folks, or one of those “climate protestors” who glue themselves to famous paintings — whom museum officials inexplicably bother to rescue. (As I wrote elsewhere, I would just leave them there to starve.)

Why Are We Still Talking About This Basement Dweller?

We ought to be starving Fuentes of attention. I wrote a column about him a couple of years ago by way of warning — just as I felt obliged to warn my fellow Catholics about the Integralists who want to shut down Protestant churches and give political power to the low-IQ posers who now prance around as Catholic bishops. Some things that are intrinsically contemptible still demand some comment, in the same way bedbugs do. That’s why we need to address incoherent piles of nonsense like transgenderism, and like tribalist ethnic hatred.

[Fuentes] has all the gravitas of a middle school class treasurer, all the warmth of a jilted suitor heckling the vows at a wedding. He reminds me, creepily, of The Joker on TV’s Gotham — who also led a cult of disgruntled, radical youth.

I’m hesitant to send you to watch Nick Fuentes’ videos. But sometimes you really have to stare something in the face to appreciate its moral qualities. … Here’s Fuentes’ PROFANITY-LACED rant on segregation. And here on video, also shocking, is Gotham’s Joker.

They’re too similar. Are we sure that playing this character isn’t Fuentes’ day job?

Contempt Is a Gift From God

Contempt is an important God-given emotion, not to be repressed or denied. The left makes heroes of “trans” boys who want to cheat at sports by competing for prizes and scholarships against smaller, weaker girls — even in violent sports such as rugby or boxing. The only proper, Christian reaction to boys like that, and the adults who enable them, is searing contempt, of the kind Jesus showed to the Sadducees and King Herod.

The cult of Nick Fuentes among a small segment of the MAGA movement seems to be a complaint along the lines of this: “The left has contemptible heroes and role models. Why can’t we?”

Kanye West Is Unwell. Stay Away from Him if You Want to Run for President

Kanye West has said some brave and important things in the past, and he’s a gifted musician. He sells records and commands attention as Michael Jackson and Elvis Presley once did. And he’s now apparently as crazy as both those men became, surrounded by yes-men who won’t try to hold him back from self-destruction. It seems that Kanye’s latest kick is the Black Hebrew Israelites — the same glowering nutcases who were taunting Nick Sandmann at the March for Life, before the fake Indian “tribal elder” showed up with his drum.

As Steve Bannon angrily noted, Donald Trump shouldn’t be meeting with people like that. They tend to do crazy things, like bring along dumb, reckless trolls followed only by angry “incels,” whose poisonous rants then get used to smear Trump’s millions of patriotic supporters.

More Poison for the Left to Spew at Us

Now those of us who back conservative populist policies are having to swat down yet another hoax (Trump as an anti-Semite). Remember the “very fine people” smear? Donald Trump rightly defended legitimate supporters of Southern heritage in Charlottesville in 2017, while denouncing the neo-Nazi trolls who tagged along and incited violence. For years, we’ve been debunking dishonest media stories which pretend Trump praised those Nazis. Well, Fuentes was one of the small group of far-right firestarters, right along with Richard Spencer.

If Fuentes (or Spencer) were a paid FBI informant, hired to disrupt and disgrace the populist movement, what exactly would he do differently? Now we have to hear about Fuentes’ dim-bulb ideas again, thanks to poor vetting and bad advice of the kind that seems to surround Donald Trump like a halo. In 2016, bad advice led Trump to appoint appalling RINOs like Nikki Haley and Christopher Wray, and endorse the treacherous likes of Mitt Romney and John McCain.

In 2022, equally bad advice is encouraging Trump to endorse empty suits like Mehmet Oz, then hobnob with Kanye, and whatever dregs he trails along in his wake. The sold-out squish Republicans who hold their own base in contempt have a new stick to beat us with.

If Trump really wants to be president again, he simply must do better than this. His embattled supporters deserve it.