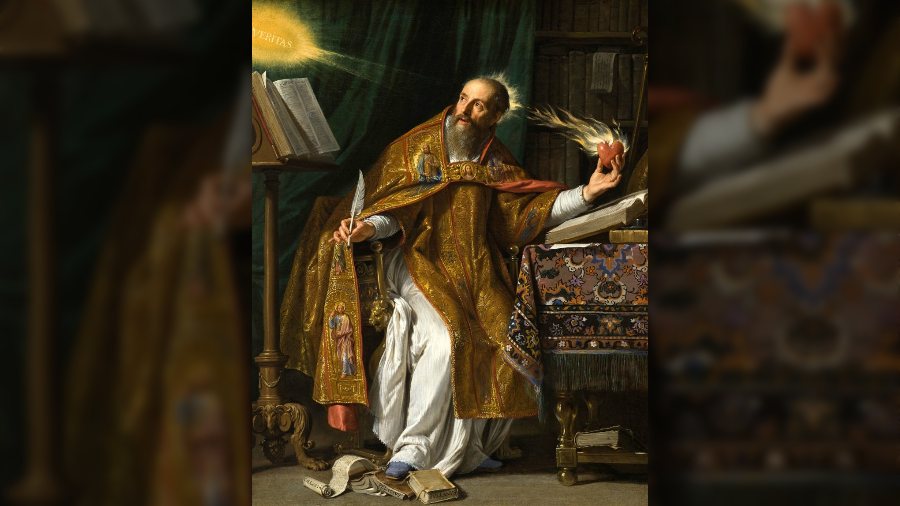 Portrait of Saint Augustine of Hippo Receiving the Most Sacred Heart of Jesus, by Philippe de Champaigne (1602–1674)

All but one of the emperors of Rome after Constantine were professed Christians. Christianity began to be enfolded into the fabric of the Roman state, for better and worse. For better, in that humane reforms inspired by a Christian respect for the human person began to be enacted, in arenas ranging from marriage law to slavery. For worse, in that the involvement of bishops in secular governance gave the emperors the pretext to interfere with the Church. Over centuries, highly placed clergy would play key roles in maintaining public order — especially in the West, after the collapse of that half of the empire. This would lead to countless battles of jurisdiction between Church and state.

Furthermore, in its persecution of Christians and enforcement of the cult of the emperors, the Roman theory of government had abandoned its old laissez-faire approach to the religious beliefs of citizens. Instead, emperors saw religion as one more tool for encouraging social cohesion — or even ensuring that divine favor would aid the empire. That theory did not disappear with the conversion of political elites to Christianity. Like them, it would simply be baptized.

This Roman holdover provoked a crisis when the Arian heresy became widespread, and a succession of Roman emperors came to the throne who embraced that doctrine. Suddenly Christians who affirmed the full divinity of Christ would feel the full force of imperial persecution, as their ancestors had before Constantine. Conversely, orthodox emperors wielded the power of the state against heretics.

A Church which had asked only for liberty from pagan Roman emperors now found itself urging their Christian successors to silence their theological opponents. There is nothing in the New Testament on which Christians can ground such a policy. Jesus’ preaching laid heavy emphasis on people’s free decision to follow Him or turn away. He even offered an explicit rebuke, in advance, of efforts to use coercion to spread belief in Him. When Jesus first commissioned the Apostles, His instructions were clear.

Shake Off the Dust From Your Feet

[P]reach as you go, saying, ‘The kingdom of heaven is at hand.’ Heal the sick, raise the dead, cleanse lepers, cast out demons. You received without pay, give without pay. Take no gold, nor silver, nor copper in your belts, no bag for your journey, nor two tunics, nor sandals, nor a staff; for the laborer deserves his food. And whatever town or village you enter, find out who is worthy in it, and stay with him until you depart. As you enter the house, salute it. And if the house is worthy, let your peace come upon it; but if it is not worthy, let your peace return to you. And if any one will not receive you or listen to your words, shake off the dust from your feet as you leave that house or town. Truly, I say to you, it shall be more tolerable on the day of judgment for the land of Sodom and Gomor′rah than for that town. (Matt. 10: 7-15)

A passage in Luke is even more explicit:

When the days drew near for him to be received up, he set his face to go to Jerusalem. And he sent messengers ahead of him, who went and entered a village of the Samaritans, to make ready for him; but the people would not receive him, because his face was set toward Jerusalem. And when his disciples James and John saw it, they said, ‘Lord, do you want us to bid fire come down from heaven and consume them?’ But he turned and rebuked them. And they went on to another village. (Luke 9: 51-56)

The first bishops to think of employing religious persecution got slapped down by Christ Himself. In the Middle Ages, when popes tried to assert their authority over emperors in secular matters, they’d be forced to ransack the Old Testament for support, with some even claiming that they had inherited the theocratic authority of Moses. With Pope Francis on the throne, we can be relieved that most Catholics reject such a claim.

Nor can one honestly argue that sacred Tradition (a high authority for Catholics and Orthodox) enshrines the use of religious coercion by Christians. We have zero evidence that any Christian leader in the Church’s first 300 years favored Christians either individually, or via the state, employing violence to convert non-believers or correct errant believers. Do advocates of religious coercion, such as Catholic Integralists today, claim that some secret doctrine was held for three centuries by the Church, only to emerge after Constantine took power? Such a suggestion is more Gnostic than Christian.

The brilliant and vastly influential Christian theologian St. Augustine tried to disentangle the Church from the empire in his epic work The City of God. In part, he wrote it to answer stubborn Roman pagan elites, who claimed that the growing chaos in the empire was the punishment for abandoning its ancestral gods (in whom almost no one still believed).

The North African bishop countered by developing a sophisticated theory of overlapping citizenship. By virtue of their birth into a fallen world, all men are first citizens of the City of Man, which concerns itself solely with our temporal fortunes. Those baptized into Christ receive a new and higher citizenship in the City of God, whose concerns and fate are eternal. There was no guarantee, Augustine argued, that the interests of those two cities would coincide, nor that even a Christian empire would thrive against its enemies.

Compel Them to Come In

Unfortunately, Augustine contributed another, negative element to the picture. Deeply frustrated by the dogged, sometimes violent Donatist heretics — rigorists who insisted that sacraments offered by sinful clergy were totally invalid — Augustine called on the Roman state to prosecute them. Here was the first statement by any eminent Christian leader justifying the government as regulating and suppressing the religious practice of Christians.

Great Christian thinkers would feel bound by deference to Augustine, and loyalty to a Church which regarded the forcible defense of orthodoxy as a duty of Christian rulers. Thomas Aquinas, Martin Luther, John Calvin, and the Anglican bishops of England would all affirm the role of the state in promoting religious uniformity. Most argued that the ruler had a duty to the Common Good, which included the salvation of individual souls. Granting the government competency to judge what would lead to salvation, and coercively enforce it, grossly trespassed on the freedom to believe on which Jesus seemed to insist. Indeed, we see here one of the origins of modern, secular totalitarianism.

Some thousand years would pass before the mutual exhaustion of the Reformation and Counter-Reformation would lead Christians again to call for the state to restrict itself to protecting religious liberty. Instead, Christian kings in nations such as France would include extirpation of heresy as duties to which they swore in their coronation oaths.

It would be some centuries after Augustine before the first Christians were executed for heresy. The appalling practice of burning the heterodox at the stake appears to be something that Spanish Christians borrowed from Islamic practice. The wielding of state power at the expense of Christian conscience — correct or mistaken — would come to be one of the greatest scandals in the history of the Church, leaving blood on the hands of Catholic, Protestant, and Orthodox rulers and churchmen alike. Each church would have its own martyrs at the hands of other churches, with mutual recriminations and bitter divisions resulting, all of which weakened Christians and softened Christendom up for the secularizing assault of the so-called Enlightenment.

US Throws Nigerian Christians to the Wolves

Christmas 2020: A Little Too Authentic for My Taste