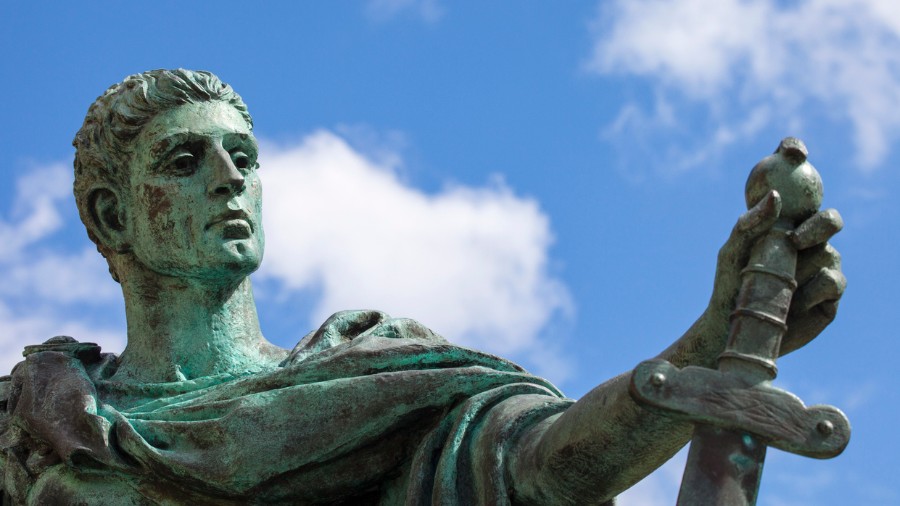 The emperor Constantine the Great

A few weeks ago (before the Ukraine war broke out!) I promised an extended series. It would examine how the principles of the American Revolution and founding emerged from the Christian worldview. This in light of Saint Paul’s apparently prohibitive scriptural injunction in Romans 13:

Let everyone be subject to the governing authorities, for there is no authority except that which God has established. The authorities that exist have been established by God. Consequently, whoever rebels against the authority is rebelling against what God has instituted, and those who do so will bring judgment on themselves. For rulers hold no terror for those who do right, but for those who do wrong. Do you want to be free from fear of the one in authority? Then do what is right and you will be commended. For the one in authority is God’s servant for your good. But if you do wrong, be afraid, for rulers do not bear the sword for no reason. They are God’s servants, agents of wrath to bring punishment on the wrongdoer. Therefore, it is necessary to submit to the authorities, not only because of possible punishment but also as a matter of conscience.

This is also why you pay taxes, for the authorities are God’s servants, who give their full time to governing. Give to everyone what you owe them: If you owe taxes, pay taxes; if revenue, then revenue; if respect, then respect; if honor, then honor.

How do you get from that to:

When in the Course of human events, it becomes necessary for one people to dissolve the political bands which have connected them with another, and to assume among the powers of the earth, the separate and equal station to which the Laws of Nature and of Nature’s God entitle them, a decent respect to the opinions of mankind requires that they should declare the causes which impel them to the separation.

Rome and the Church in Collision

The answer is … very gradually, through a series of crises that force people to think more deeply about what God did (and didn’t) mean by including such a passage in Scripture. And to think that through in light of what else we find there (in both Old and New testaments), and of new situations which St. Paul did not envision.

The letter to the Romans was written long before the widespread, systematic persecution of Christians by the Roman empire. Nero’s attacks on the Roman Christian community might have seemed at the time a one-off. Or the perversity of a ruler given to other atrocities. But future emperors would emulate Nero in believing the worst, whispered slanders about Christians as secret cannibals, anarchists, and enemies of Rome.

The inherent flaws would emerge in an autocratic system built on widespread slavery and imperialistic conquest, with no reliable system for choosing new emperors. So the empire suffered. The original natural virtues which had made Roman dominance possible receded ever further into the past.

Instead of citizen armies who’d leave off ploughing for a season to defend a Republic, Rome developed a vast mercenary army. That was needed to occupy the vast areas conquered by ambitious generals like Caesar or Pompey, and keep loot flowing to Rome. Soon the ranks were filled with foreign recruits. The troops of various legions gave their loyalty to commanders who rewarded them financially, instead of to the abstraction that was Rome. That meant that every time an emperor died, or politically faltered, civil war was a very real prospect. The army became a kind of nation unto itself, with less and less connection to civilian politics or local communities.

A God Upon the Throne

And Christians proved a useful scapegoat, again and again, for emperors uneasy in their power, looking for someone to blame for the empire’s declining fortunes. Some blamed the Christians. (More than a millennium later, neo-pagans like Edward Gibbon would repeat this accusation.) At the same time, the effort to shore up the emperors’ authority included formal “divinization” by the Senate. As early as the reign of the first emperor, Augustus, there were shrines where his great-uncle Julius was worshiped as a god. The cult of the divine emperor quickly expanded to include still-living rulers, like the fourth emperor Claudius. And over the course of decades, paying divine honors to living men who ruled ceased to be voluntary. Emperors began to impose it as a test of political loyalty.

Christians unanimously, without any debate, realized that worshiping a living man as a god was not covered by St. Paul’s dictates in Romans. The First Commandment forbade it. The example of the Maccabees suggested that God preferred outright rebellion to participation in paganism. But the persistence of pacifist scruples combined with the utter impossibility of overthrowing the Romans to encourage instead among Christians a veneration for martyrdom. Jesus called us to follow Him and take up our crosses. Perhaps the purest witness to Christian faith was to literally die on one, as St. Peter would. Indeed, except for St. John, every one of the 11 faithful Apostles would die as martyrs (some to the Romans, some to the Pharisees).

Countless Roman women, converted to Christianity, refused pagan marriages and instead vowed virginity. Many were executed on the authority of the fathers whom they’d defied. They were venerated by the Church, and that fact helped cement for the first time in the West the principle that women’s free consent was essential to marriage.

A Church of Martyrs

Many of the early bishops of Rome, and other major cities in the empire, would die at the hands of Roman officials. Their tombs became liturgical shrines, where Christians would gather to celebrate the Eucharist. The text of the liturgy began to include a list of early martyrs, heroes and heroines of the faith now invoked as part of the holy sacrifice:

Roman authorities developed formalized tests to which they’d subject suspected Christians: burning incense in worship before the emperor’s statue. The reforming emperor Diocletian (284-305) who came to power after a century of crisis and almost constant civil war, determined to set imperial authority on a new and firmer foundation. Part of that was hyper-regulating and militarizing Roman society from top to bottom. Suddenly men’s professions became hereditary, and enforced by the government. If you were a cobbler or a tax collector then so would be your sons, and their sons would be as well.

You Will Worship the God-Emperor

Diocletian’s efforts to make the empire more rigid also included the extermination of Christians. He was determined to elevate imperial authority to the heights once enjoyed by Pharaohs in Egypt, whose subjects adored them as god-kings. An entire, expanding class of citizens who rejected imperial godhead was completely incompatible with his program. So the empire embarked on a massive, coordinated persecution of Christians, killing uncounted thousands (historians still argue over the actual numbers involved).

Romans with little to live for and nothing to die for watched entranced as Christians stood courageously in the Colosseum, dying at the hands of wild beasts and gladiators. By this means, the blood of the martyrs would become the seed of the Church.

The savagery aimed at Christians only ended with the rise to power of Constantine (306-337). As this soldier embarked on his own rebellion to claim the imperial throne, he experienced some epiphany. He would later recount a vision that promised him victory if he venerated the chi-rho, a common Christian symbol using Christ’s initials. Victorious in the civil war that followed, he would issue the historic Edict of Milan, granting Christians total religious freedom.

In the course of his reign, Constantine would go much further, leaning on the newly emancipated Christians as a key base of support. Bishops went from the catacombs to the imperial palace and served Constantine as advisors. He paid to rebuild churches which the Roman state had destroyed. Historians still debate the extent to which Constantine became a convinced Christian during his life. Peter Leithart, in the authoritative Defending Constantine, makes a strong case that Constantine’s conversion was sincere, though it took time for its implications to sink into his actions.

Beyond ending persecution, Constantine embarked on certain Christian-inspired reforms, including laws to discourage the widespread Roman practice of infanticide, and ameliorate the treatment of slaves. Crucially, he abolished the pagan sacrifices and rites long required for service in the army. Once those were gone, Christians quickly began to flock into the legions.

Constantine was crucial in the summoning of the critical Council of Nicaea, over which he presided (though still unbaptized) in an effort to resolve the savage divisions among believers over the divinity of Christ. That council codified our Creed, and helped set the final canon of the New Testament, enshrining as inspired books the gospels and letters that had been used in major churches over previous centuries. Constantine’s conversion set the tone for Rome’s ruling class and his family, most of whom would join the newly legalized Church.

It also laid the groundwork for a more ambiguous development — the later Emperor Theodosius’ declaration that Christianity was the official religion of the empire. Theodosius would do more than favor Christians. He would persecute pagans, close down their temples, and impose legal disabilities on Jews. That action reflected more the autocratic impulses of the Empire than the spirit of the Gospel, and it would set the stage for dangerous entanglements between Church and State with profound implications for religious freedom among Christians. I’ll examine those in future columns.

Why America Survives Despite Its Nihilist Supreme Court