How Can You Follow Jesus and Support Donald Trump? 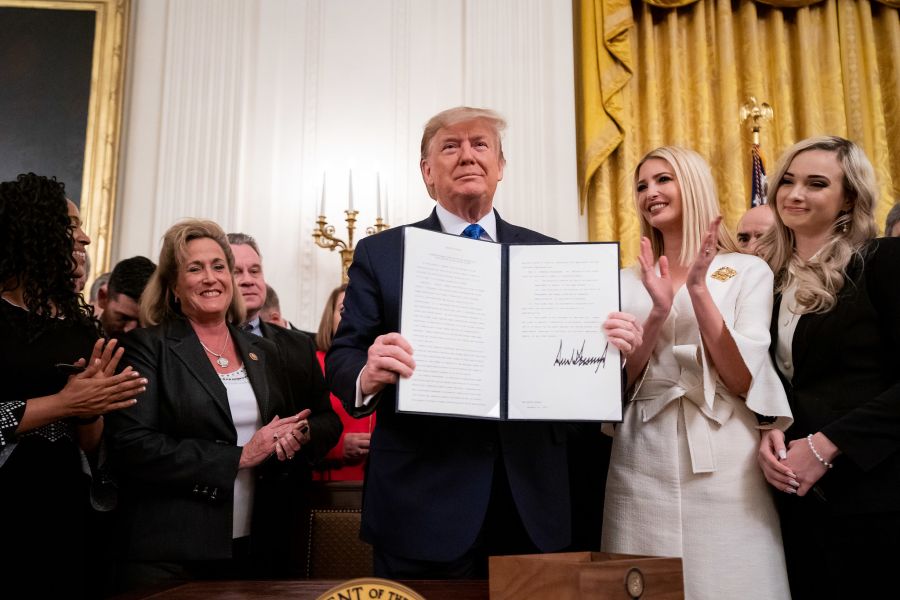 President Donald J. Trump, joined by Presidential Advisor Ivanka Trump, displays his signature on an Executive Order for Combating Human Trafficking and Online Child Exploitation in the United States, at the White House Summit on Human Trafficking in honor of the 20th Anniversary of the Trafficking Victims Protection Act of 2000 Friday, Jan. 31, 2020, in the East Room of the White House.

Like many, I’m perplexed by the divide in the Christian community over President Trump — but I’m not surprised. The media is fueling lies, and the world is listening.

This is demonstrated in a worship song by Daniel Deitrich (talk about the wrong place to express political views). Deitrich’s song is a response to the 81% of white evangelical Protestant voters who supported Donald Trump in 2016. Here are some of the lyrics: “They started putting kids in cages. Ripping mothers from their babies. And I looked to you to speak on their behalf.”

This, of course, is in response to what is “perceived” as happening at the border. The truth is, kids are not being put in cages and ripped from their mothers, as the song accuses.

I assume that Mr. Deitrich is sincere and his heart truly wants to help people. But we must get our facts from reputable sources or first-hand experience. God willing, I’m touring the border with other California pastors very soon and hope to gain that perspective personally. (Look for that op-ed in mid-February).

We Christians love refugees and immigrants and are eager to help with food, lodging, and jobs. But at the national level, the president is to put the safety and provision of the American people first. When an airplane loses cabin pressure, parents put on their oxygen masks first to better assist their child. This isn’t selfishness; it’s wisdom. Opening the borders parallels cabin pressure falling and a limited supply of masks. Our law enforcement officers could not sustain the load, nor could our nation. Let’s streamline the process and welcome God-fearing immigrants and have them contribute to society so everyone benefits.

The push toward open borders is more about votes than truly helping people. Open borders would be like me telling my kids to leave their windows open in case a stranger needs a warm night’s sleep. That would be severe parental neglect because many harmful things could also enter through those open windows. Open borders would parallel that type of irresponsibility.

God doesn’t judge a nation based on the character of one man; He judges it based on the spiritual health of her people.

Additionally, our financial system cannot support people flooding in who need assistance. How is that using wisdom? It’s not a matter of if this type of financial irresponsibility causes damage but when and how much. Our representatives need to wake up to this fact — and wake up quickly. There is a better way, but our leaders must repent and seek God for wisdom.

And we must not let hatred blind us to facts. Or derangement to distract from our nation’s direction.

Where is the Country Headed? What are the Facts?

God doesn’t judge a nation based on the character of one man; He judges it based on the spiritual health of her people. Never forget that.

The majority of news outlets spin everything (yes, everything) to put President Trump in a bad light. Their hatred for him trumps the truth. Their agenda is simple and clear: remove him from office at any cost! And I hope you realize this: they are really coming after you, me, and our Christian values.

Most critics don’t care what the facts are. Their hatred for the president overshadows their desperate need for humility. Let this sink in: innocent children are being protected, godly counsel is surrounding President Trump, terror is being restrained, good judges are being selected, socialism is being resisted, families are being encouraged via employment (black employment is at an all-time high), prayer is being brought back in schools, God’s wisdom is being sought, and on and on it goes.

So again, we are not following a man, we are revitalizing a movement — a movement back to God. I’m more concerned with our nation’s national character than I am with the president’s personal character.

There is No Plan B

An analogy that I often use will bring this point home. The head of a neighborhood watch program, who took the late-night watches, had previously had an affair. He was occasionally gruff and impulsive, and sometimes his words were crass and offensive, but he watched over the neighborhood diligently each night. Each week he invited church leaders into his home to pray for him and his family and to seek their advice. He often stood against others on the committee who wanted to enact policies harmful to the neighborhood and to the children, such as advocating an open-door policy where residents were required to allow anyone into their homes at all hours of the day for handouts.

Is this not the kind of person you would want leading your neighborhood watch? Does his past or his demeanor matter more than the results he is accomplishing? If you are intellectually honest, the answer is not difficult. In the same way, the answer is simple for America.

Again, we are not voting for people based on how godly they are; we are voting for the future direction of America: the right to life, the elevation of God’s Word back to its proper place, the appointment of conservative judges, securing America and her borders, creating jobs, and improving the quality of life for all Americans.

As a personal observation, I have noticed that those who oppose President Trump typically embrace liberal theology. It makes one wonder what is truly leading them: worldly mandates or biblical principles.

I will close with what I stated in a brief op-ed: We can’t have our cake and eat it too — there is no middle ground for Christians today. You can choose a president who will wear a Planned Parenthood scarf at her inauguration or one of the countless others who would seek to destroy the America we know and lead us down the primrose path of socialism — or worse. Or you can choose to back President Trump. There is no Plan B.