How Can We Say ‘No’ to the ‘Refugee’ Caravan? 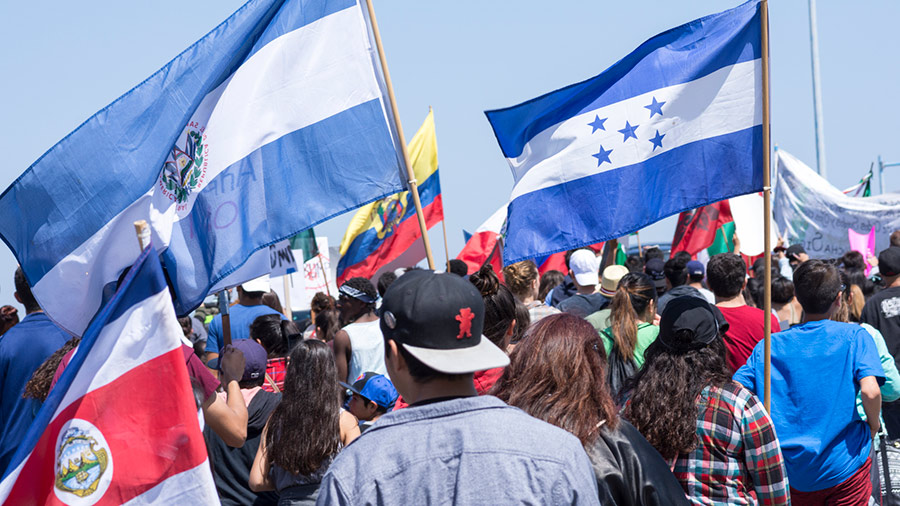 A caravan of “refugees” from Central America marches toward the U.S. Its members wave the flags of the nations they claim are persecuting them. (That’s the only legitimate ground for seeking refugee status.)

Which seems kind of … weird. I wasn’t there at the time. But I don’t think the ships full of Jewish refugees from Germany which Roosevelt cruelly turned back were bedecked with Nazi flags. Nor had those Jews been safe and protected in Cuba or Canada, but then insisted on sailing for greener shores. They were real refugees, hunted by an evil government. And thousands of them got sent back to Germany, which murdered them.

What’s happening today is utterly unlike that. It’s not a refugee crisis but a kind of invasion. Take a look at what we might face:

TODAY: the U.S.-bound migrant caravan breaks through Guatemala border fence and rushes toward the border bridge into Mexico – AP pic.twitter.com/mNIX0wpniO

Let’s pretend that these were ever genuine refugees. (As opposed to economic migrants.) They lost that status the moment they set foot in the “first safe country.” That’s international law. They don’t get to shop around for nations of refuge with more generous welfare systems. That’s not how this works.

President Trump has put Mexico on notice. Not one of these people should ever set foot on our soil. He needs to use the military to make sure that doesn’t happen. And Congress must give him the money to build a Wall for next time.

But the left has adopted a radical theory. For all its moralizing, pretentious rhetoric, it boils down to the same message that Antifa likes to chant: “No Trump, No Wall, No U.S.A. at all!”

As I wrote last February, that conference

The CCHD is the organization that radical Saul Alinsky personally helped left-wing Catholics to design, as the exposé A Wolf in Sheep’s Clothing documents. The Chicago branch of the CCHD, with the approval of then Cardinal Joseph Bernardin, cut the check that sent the young Barack Obama to his first Saul Alinsky “community organizing” school.

Another group that took part in the “Meeting” was PICO, the Latin American far-left organization that used George Soros’ money to spin Pope Francis’ 2015 U.S. visit as a boost to Democrats in the 2016 election.

The conference closed with a manifesto. Its central claim was this:

Racism and all forms of human hierarchy, whether based on skin color, gender, sexual orientation, physical ability, arrest and conviction records, immigration status, religion or ethnicity are immoral.

On this I observed:

So every form of distinction we make among people is equally as evil as racism. It’s sinful to distinguish at the polling place between illegal aliens and legal voting citizens; in hiring between murderers and veterans; in seminary admissions between gay and straight men.

“Your Country Is Hell. Let Us In!”

The bishops went on to claim:

The lack of good jobs, affordable housing and clean water and air is literally killing people. Racism is stripping Black, Latino, Asian, Muslim and Native people of their humanity and fueling police abuse and mass incarceration, and fueling a crisis of homelessness and displacement. Raids and Trump Administration Executive Orders are scapegoating immigrants and ripping families apart.

Does this seem to you like a fair description of life in today’s America? Why do millions of people want to leave countries like Mexico, and risk their lives to illegally enter such a dystopian nightmare society?

How evil is America? Here’s another quote from the conference:

The system’s gangrene cannot be whitewashed forever because sooner or later the stench becomes too strong; and when it can no longer be denied, the same power that spawned this state of affairs sets about manipulating fear, insecurity, quarrels, and even people’s justified indignation, in order to shift the responsibility for all these ills onto a ‘non-neighbor.’

Now that quote is really special. It doesn’t come from the bishops. Pope Francis wrote it himself. He sent it in a message of support for the conference.

A Plan to “Disrupt Trump”

Nor did the churchmen stick to theory. They offered a practical action plan:

We urge every faith community, including every Catholic parish, to declare themselves a sanctuary for people facing deportation. … All cities, counties and states should adopt policies that get ICE out of our schools, courts and jails, stop handing over people to ICE …

We ask our Catholic Bishops to write a covenant that spells out specific actions that dioceses and parishes should take to protect families in the areas of immigration, racism, jobs, housing and the environment.

Step back from the sheer madness of all that for a moment. How do we forthrightly answer such demands? What moral backing can we offer for using legitimate force to stop mass invasions of our country like this “refugee caravan”?

What moral backing can we offer for using legitimate force to stop mass invasions of our country like this “refugee caravan”?

The answer is clear. We should see our nation as the extension of each of our private homes, writ large. Does each of us have a duty to let anyone who claims to be homeless come and camp out in our living rooms? Of course not. So why are we as a nation bound to do the same, on a massive scale? The answer is: We aren’t.

We have the right to use reasonable force to restrain an invasion. We must be humane and careful, but also firm. We should treat our common national home as something more than a holding tank for millions of strangers. Instead, it’s a locus of love, like a family estate inherited from great-grandparents, lovingly treasured, cared for, and gently improved when needed. It’s for people of every race and creed, but not for anyone at all on the face of the earth who decides to show up and demand admission.

If a citizen’s home is his castle, his country is his sanctuary. Voting democratically, we have the right to determine who comes and goes. And a duty to future generations not to leave the place in ruins.