Hope in the Dead of Winter: The Story of Christmas 1776 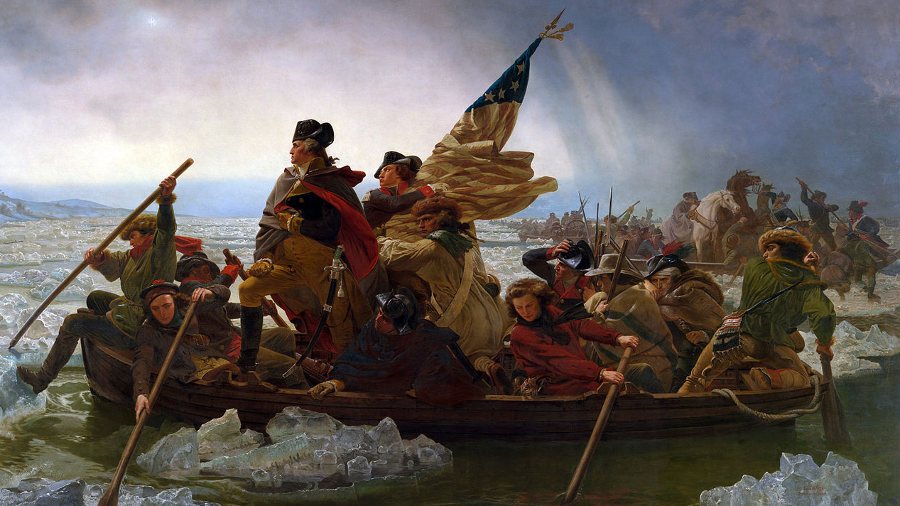 “These are the times that try men’s souls; the summer soldier and the sunshine patriot will, in this crisis, shrink from the service of his country; but he that stands it NOW, deserves the love and thanks of man and woman. Tyranny, like hell, is not easily conquered; yet we have this consolation with us, that the harder the conflict, the more glorious the triumph.”

These immortal words from Thomas Paine’s The Crisis, among the most widely quoted of the American Revolution, were published during the cold and bitter days of December 1776. The days were cold because of the advancing season. The days were bitter to the cause of American independence because of the circumstances that placed General George Washington and his ill-clad army shivering in make-shift quarters on the Pennsylvania side of the Delaware River.

The summer campaign of 1776 had been one of defeat and disaster for the patriots. They had steadily given ground to the British and their Hessian mercenaries. Driven from New York, they had retreated across New Jersey to the Delaware. Only the onslaught of winter kept the professionally trained British and Hessians from seizing upon their advantage, overtaking Washington and dispersing his band of ragtag rebels. They settled into the warmth of snug winter quarters and ceased to pay the rebels any mind.

Washington drew up plans for a bold cross-river counterstroke to be executed in the dead of night — on Christmas.

An advance outpost of 1500 Hessians under Colonel Johann Rall occupied Trenton, New Jersey. The exposed nature of this posting was not lost on Washington. The independence of the states, so recently solemnized and proclaimed by declaration of Congress, was in dreadful peril. It was essential that a reversal of fortunes be effected. Washington drew up plans for a bold cross-river counterstroke to be executed in the dead of night — on Christmas.

We are indebted to Colonel John Fitzgerald, Washington’s aide-de-camp, for his running account of the last frantic days of 1776. The following entries from his diary reveal the mind of the American camp as the movement against Trenton materialized:

Christmas, 6 P.M. — The regiments have had their evening parade, but … are marching toward the ferry. It is fearfully cold and raw and a snow-storm setting in. It will be a terrible night for the soldiers who have no shoes. Some of them have tied old rags around their feet…

Dec. 26, 3 A.M. — …The troops are all over, and the boats have gone back for the artillery.… The fishermen have had a hard time to force boats through the floating ice with the snow drifting in their faces.… I never have seen Washington so determined as he is now. He stands on the bank of the river, wrapped in his cloak, superintending the landing of his troops. He is calm and collected, but very determined…

So goes the eyewitness account of one of the most epic moments in any nation’s history. The picture of Washington’s band, braced against the storm, negotiating a passage in open boats through dark currents laced with hazardous chunks of floating ice is firmly etched in modern day minds thanks to the classic painting by Emanuel Leutze.

The crossing completed, the storm-buffeted patriot army divided into a two-pronged assault force and prepared to traverse the nine ice-bound miles to slumbering Trenton. The weather exacted its toll. Two soldiers slumped to the ground and slept the last frozen sleep of exhaustion. The tracks of the army were marked by blood from feet cruelly cut on the frozen road. At 8:00 a.m., two hours off their dawn target time, the two columns simultaneously entered the town.

The Hessian army was largely abed, anesthetized by the winter storm that beat against the windows of their quarters. An attack was far from their thoughts — until the patriots were upon them. Rushing out, they hastily attempted to form ranks in the streets, only to be cut down by American artillery. The Americans made short work of it. The mortally wounded Colonel Rall surrendered his sword and 900 troops to General Washington. The American loss was four men wounded.

In the ensuing two weeks, Washington and his ragtag army crossed and recrossed the Delaware River. They surprised and routed British reinforcements at Princeton and liberated almost all of New Jersey. Exhausted, but victorious for the time being, they moved into winter quarters at Morristown.

The British in New York were given the remainder of the winter to contemplate missed opportunities and the sudden changes in the complexion of the war. France and Spain, potential allies of the American colonies against England, considered the patriot cause with greater interest.

Another four Christmas seasons would come and go before American independence was finally secured on the field of battle at Yorktown. But perhaps it is safe to assume that even in the years of peace that followed, George Washington himself reflected on the timeless writings of Thomas Paine that so spoke to the hearts of men — and characterized the spirit of those who helped turn the tide, on Christmas 1776:

Let it be told to the future world, that in the depth of winter, when nothing but hope and virtue could survive, that the city and the country, alarmed at one common danger, came forth to meet and to repulse it.… I love the man that can smile in trouble, that can gather strength from distress, and grow brave by reflection. ‘Tis the business of little minds to shrink; but he whose heart is firm, and whose conscience approves his conduct, will pursue his principles unto death.

Gary Davidson, a former homeschool dad, is privileged to engage his passion by teaching history in a local homeschool cooperative. He and wife, Kari, live in the North Texas area. They enjoy spending time with their 3 children, 8 grandchildren and 5 great-grandchildren.