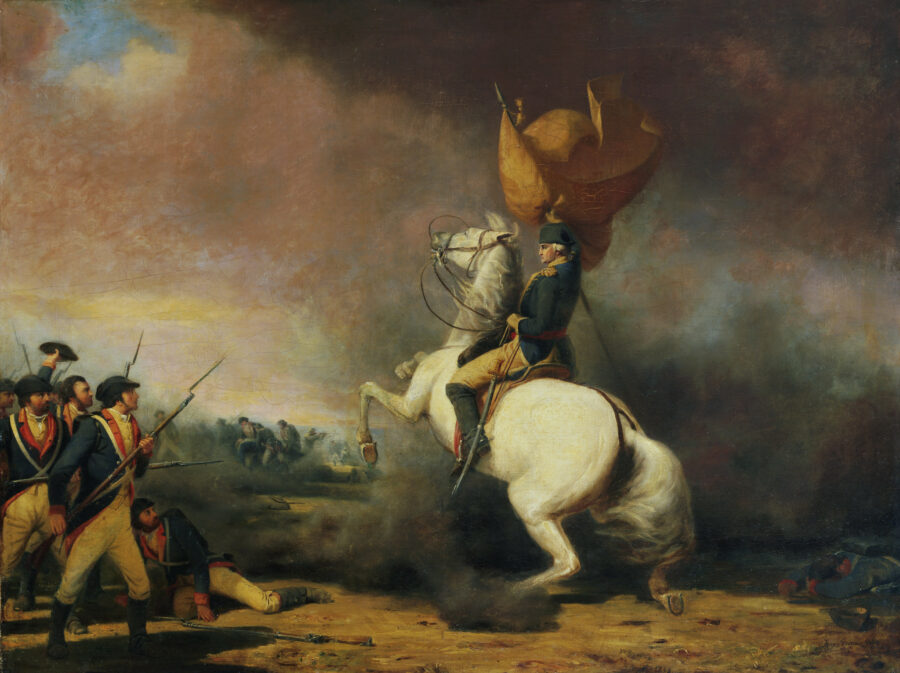 Into the smoke-wreathed swirl of battle rode the commanding general, larger than life, immaculate in buff and blue, astride his raging steed. The scene cried out desperately for a response to match the moment. General George Washington, by force of character and example, gathered up the scattered and broken pieces of what had been the American line of battle, reformed it, and threw it back in the way of the British bayonet charge.

Time stood still as the fate of men and a new nation hung in the balance. Washington stood the line, immovable and resolute, willing momentum’s change. His aides were aghast. Colonel John Fitzgerald hid his face with his cap to avoid seeing the demise of his chief. One young naval officer later wrote in a letter, “I shall never forget what I felt at Princeton on his account, when I saw him brave all the dangers of the field and his important life hanging as it were by a single hair with a thousand deaths flying around him. Believe me, I thought not of myself.”

General Washington’s actions saved the day at the Battle of Princeton, New Jersey on January 3, 1777. He came through unscathed on a day when many officers in the American army did not. Fought just nine days after the electrifying victory at Trenton, New Jersey, Princeton provided the second devastating blow in a one-two punch that liberated most of New Jersey from British occupation, and for a time, derailed the efforts to quash American independence.

But that pivotal battle and Washington’s valiant stand were only made possible by a different sort of valiant stand on New Year’s Eve. This is that story.

We pick it up on December 27, 1776, as cold, hungry and thoroughly exhausted men of the Continental Army collapsed into crude shelters on the Pennsylvania side of the Delaware River. They had just returned from their victory at Trenton. On Christmas night, in the face of a driving sleet and snow storm, they had negotiated a passage across the ice-choked river to strike a forward outpost of 1500 Hessians. Britain’s King George III had hired these soldiers-for-pay to help put down the rebellion in the colonies. But the Americans were fighting as free men of independent states. Under the command of their revered leader General George Washington, they had brought back 896 prisoners with them.

But they were tired, used up by battle and by the weather. Washington convened a called council of war during the late-night hours of the 27th. His general officers were as tired as their men.

The question before them: Should the army rest and recuperate in the wake of the triumph at Trenton, or seek to capitalize and gain further advantage over the enemies of freedom?

The answer was not self-evident. The British, now thoroughly roused, were mobilizing thousands of fresh troops under expert leadership. Washington was faced with the prospect of losing the continentals, the experienced core of his army, to expiring enlistments. He could only hope that they would respond to his personal appeal and commit to stay on for at least a few more weeks. Without them, there would be little chance of furthering the gains won at Trenton.

On December 31, Washington mustered his army. He sat on his horse before them. These were mostly New England men. They looked past him with hopes of home and loved ones seated about a warm hearth. The very next day they would be gone, at least for a short time, to make their longings a reality.

Washington’s appeal fell flat. Not one soldier stepped forward. The general tried again. His words were recorded for all posterity by an unnamed sergeant:

“My brave fellows, you have done all I asked you to do, and more than could be reasonably expected; but your country is at stake, your wives, your houses, and all that you hold dear. You have worn yourselves out with the fatigues and hardships, but we know not how to spare you. If you will consent to stay one month longer, you will render that service to the cause of liberty, and to your country, which you probably can never do under any other circumstances.”

One man here, another there, then a few more together, stepped forward. Then, almost all that remained of the troops assembled, in a body joined them.

The End of the Matter

We who populate this present day have the advantage of seeing the end of the matter, as well as the beginning. We often tend to sit back in our armchairs, smug in our critique of the recognized blunders of those who have gone on before, barely appreciating the human costs of their success. The cold days of ’76 swept imperceptibly into the cold days of ‘77. Washington’s tired little band soldiered on. Victorious at Princeton as well as Trenton, they put an exclamation mark on what was truly a decisive turnaround in the war. Ending the campaign and marching to winter quarters, they were missing in some units as many as half of the brave souls, casualties who on December 31 had foregone the pleasures of home to step forward to the fight.

“What we obtain too cheap, we esteem too lightly: ‘Tis dearness only that gives every thing its value. Heaven knows how to put a proper price upon its goods; and it would be strange indeed, if so celestial an article as FREEDOM should not be highly rated.”

Thomas Paine “The Crisis, Number I”

Gary Davidson, a former homeschool dad, is privileged to engage his passion by teaching history in a local homeschool cooperative. He and wife, Kari, live in the North Texas area. They enjoy spending time with their 3 children, 8 grandchildren and 5 great-grandchildren.

Hope in the Dead of Winter: The Story of Christmas 1776