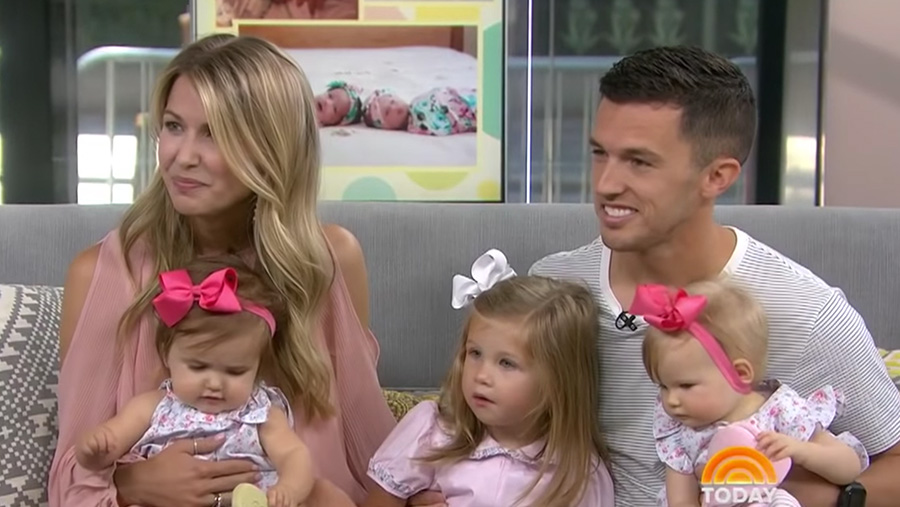 LIFE Today will host Josh and Aly Taylor, stars of TLC’s television show Rattled, on January 24, 2019. During the program, the couple will discuss Aly’s breast cancer diagnosis and the miracle of how God formed their family. The Stream’s Nancy Flory sat down with Josh and Aly recently to talk about how they made it through the difficult times and what kept them going.

“We were trying to have a baby. We thought the next big call we would be making to our family was that I was pregnant, and instead we’re calling them saying I have breast cancer.”

Aly Taylor was only 24 when she was diagnosed with stage four breast cancer. “We were living a normal life,” said Josh. “I was building houses, Aly’s in school. … We were just kids. And then this happens.” For the first two months after the diagnosis, he felt like he was drowning. It was all about surviving each moment.

‘We Were Living a Normal Life’

The crisis tested their faith. Josh struggled with how to handle the news. “[People] want something [they] can handle. And in that moment what people are saying is, ‘if I could wrap my head around this I can handle it.’ And the truth is, in most of life you don’t get that. That’s not faith, it’s, ‘No, you’ve given me a picture of what’s happening, I can handle that. Okay, I’ll walk toward it.’ And that’s obviously not faith.”

Aly had her own struggles. “I think I always thought that faith is that things will turn out good, but I think I finally realized, faith is faith because you have no clue how it will turn out and yet you’re still believing,” she said. “But you’re not given that in the journey. All you see is this dark tunnel and you have to see that at the end of it there is light.”

Josh realized that it is in the difficult moments when you find out where you stand spiritually. “Something like this [cancer] just exposes where you are [spiritually and emotionally]. For me, it gave me a picture of a couple of things: it was the first thing I’d ever faced that money, time or talent couldn’t fix.”

He found himself thinking of backup plans, in case the cancer treatment didn’t work. Aly told him she needed him to believe in her healing. “As a husband, I just wanted to throw up.” He saw his hypocrisy of saying he had faith, yet not believing God for her healing.

Before one of her surgeries, Aly’s doctor told the couple that Aly had less than a 20 percent chance of being cancer free. Aly explained to Josh that if God didn’t heal her of cancer, they still had to believe. “We can’t look back and say we didn’t believe.” That was the moment when Josh realized that, by coming up with backup plans, he didn’t fully believe in her healing.

She had 16 rounds of chemotherapy, a double mastectomy and several reconstructive surgeries. Following the surgery, Aly received a cancer-free bill of health. “God did the miraculous,” she said. It had been eight grueling months.

Another Level of Trust

Their story had just begun. They still wanted a family. Throughout the cancer treatment, they believed God would protect her womb. They held onto Psalm 128.

But Aly’s doctor confirmed that Aly couldn’t get pregnant. “We were devastated. Not only because we didn’t get pregnant, but also when you believe God would do something and it looks like He didn’t — we thought He’d protected and He didn’t — it’s another level of trust.” She and Josh had to trust God anyway. “God, your plan is bigger, I trust Your plan. Even though this was my plan, I’m trusting Yours.”

Josh and Aly decided to adopt. A short time later, they had their chance. In March, 2015, a baby girl was born. Aly attended the birth, held her and fed her. The next day, however, they found out that the mom decided to keep the baby. Once again, they were devastated. “We thought, ‘How can this even happen?’ This was our baby.” Even in their hurt, they realized they were there for the baby, and not as parents. “The child’s eternity matters. And so, if we’re not going to be the ones pouring into her, we want to pray for the people that are.”

They did. And just as they began to walk away, the birth mother called out to them. “God’s only spoken to me one other time in my life and He did right now. This time while you guys were praying He said you guys are the parents of this little girl.” Within hours, she signed the paperwork. “The baby was ours,” said Aly. They named her Genevieve.

Another Miracle … or Two

Nine short months later, Aly didn’t feel well. She decided to take a pregnancy test, but felt silly doing it. She forgot about the test and went to exercise. But when she returned, she saw two lines. She thought something was wrong. “I sent a picture to my doctor. She didn’t even say ‘congratulations.’ She just said, ‘Can you come in today?'” She wasn’t excited at first. “It wasn’t a happy thing,” Aly recalled. But when her doctor confirmed she was indeed pregnant, with a healthy baby, Josh and Aly realized they’d witnessed another miracle. “We named her Vera. Her name means ‘faith.’ And so, she’s our faith baby.”

Their family wasn’t finished growing. A month after finding out that Aly was pregnant, Genevieve’s birth mom called. She was pregnant again. “She knew Aly was pregnant and said, ‘I know you’re pregnant, you probably can’t make this happen right now,'” Josh said. They told her they’d think about it. Very quickly, they knew they wanted to adopt Genevieve’s sibling. However, it meant a move from Louisiana to Kentucky, where the birth mom lived. “So, at 36 weeks pregnant we loaded up a motor home and lived in a KOA.” They wanted to be close to the birth mom when she had the baby. Lydia came 11 days after Vera.

Once again, the birth mom wanted to keep her baby. But after a few days and lots of prayer, she signed the papers, allowing the Taylors to adopt Lydia.

“And then, in the middle of all this TLC heard about our story.” They weren’t sure they wanted to share the intimate moments of their lives with a television audience, but prayed about it. “We thought, ‘You know, this could be such a way to shine a light [on] the miracles and the way [God’s] built our family.'” The television show Rattled follows the stories of several families with babies.

In July, the Taylors signed on for another season with the show. Although they describe the first season as “intense” because of the birth of the babies, the summer season wasn’t bad. “They came in for a couple of days at a time and it was just everyday life,” Aly said. “This time it was more fun because they captured our girls painting their room and going to a party. It was fun stuff.”

The one thing the Taylors want people to take away from their story is hope. Some people in their situation want something more, something concrete, to hold onto. But Aly said that they only need one thing. “Hope is enough. God’s Word is enough.”

Aly remembered praying when they weren’t sure they would get Lydia. “‘Okay God, should I just be thankful? You’ve healed me of cancer, we have Genevieve, we have Vera, should I just say okay God you’ve done enough?’ And I remember God speaking to me and saying ‘Aly, I’m not human. I want to do good for you abundantly, more than you could ever ask or imagine.’ And so I think, another thing I always try to tell myself is I can never ask too much of God. Keep asking for more. He wants to do more. Am I willing to ask? Am I willing to believe that He can do more and not just put boundaries on what He can do?”

‘Out for Our Good’

Josh said he and his wife are simple people. “A lot of times people think people who have stories like ours have something special. The truth is, we just really believed God was out for our good and we just kept fighting without knowing what it was.”

He added that once people ask God to reveal Himself to them, they should just walk in that revelation. He said there were times when he thought God’s plan had changed, but it hadn’t. “In reality, it was [that] God was about to show up each time. And if we’d stopped [walking in God’s revelation], I might not have given Him the chance.” He said they just had to trust God. “At some point, you do have to just say, ‘I asked you to show me Your plan. You did. Give me wisdom on how to proceed.’” Then, Josh said, “you just go.”

“God makes the most beautiful stories,” added Aly. “The way He’s built our family is so unique and it’s so much better than we could have ever imagined or asked for. We always say, our dreams have been far surpassed. But it all started with surrendering to His plan.”

What We’re Up Against: Powerful Spiritual Deception