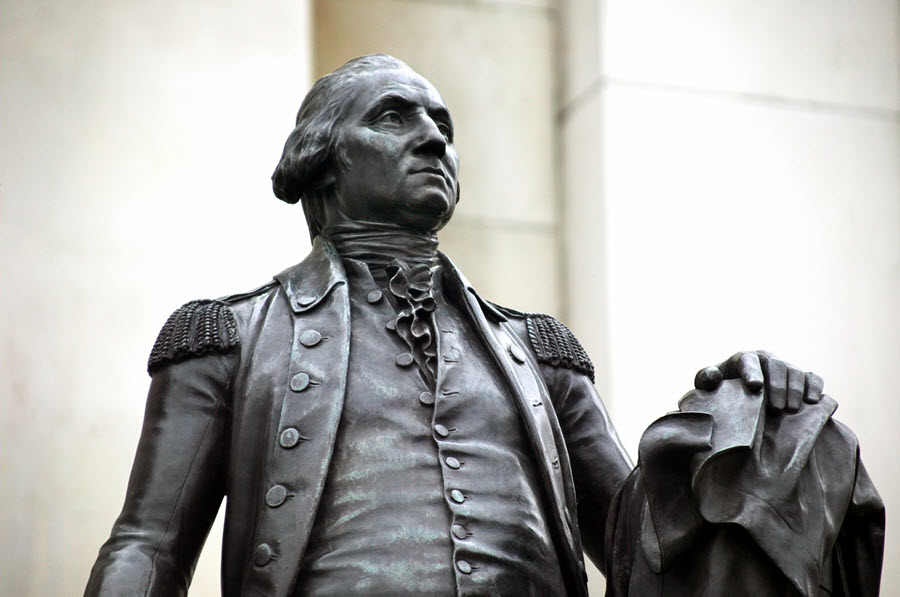 The more I read George Washington’s  letters, the more grateful I am that this man set the tone for the American nation. They’re rhythmic and musical, richly descriptive, and above all profoundly human. You meet the man behind the manners.

We rightly call Washington the father of our country. But do we see him as a human being in a time that really did try men’s souls? He suffered tremendously for our freedom and won it against all odds.

General George Washington lost battle after battle. A relative novice leader, he saw his army get hammered repeatedly by superior British forces, only to escape almost miraculously to fight another day. Horses got shot out from under him and his clothes shredded by bullets. But he never flinched and never got hit.

Washington refused payment for his service during the war. Indeed, he spent his own money buying food and clothes for his soldiers. He spent long times away from his wife and family. He froze and starved and faced rampant deadly disease alongside his men. He did all this under the shadow of being hanged for treason.

Europe was full of religious bigotry. Whichever group had power often lorded it over those of different beliefs. Of course, these attitudes bled into America. Our founders set an example against intolerance, forbidding either an established church or religious persecution in the very First Amendment to the US Constitution.

Read George Washington’s “Letter to the Hebrew Congregation in Newport, Rhode Island.” He ends this friendly address with the following lovely prayer:

May the Children of the Stock of Abraham, who dwell in this land, continue to merit and enjoy the good will of the other Inhabitants; while every one shall sit in safety under his own vine and figtree, and there shall be none to make him afraid. May the father of all mercies scatter light and not darkness in our paths, and make us all in our several vocations useful here, and in his own due time and way everlastingly happy.

Washington was equally friendly to the much-feared, tiny Roman Catholic population of America. (Catholic services were illegal in places like Boston.) He wrote them:

[A]ll those who conduct themselves as worthy members of the community are equally entitled to the protection of civil government. … May the members of your society in America, animated alone by the pure spirit of Christianity, and still conducting themselves as the faithful subjects of our free government, enjoy every temporal and spiritual felicity.

One of Washington’s first acts as commander of the Continental Army was to forbid the popular annual burning of an effigy of the pope on Guy Fawkes Day.

Yeah, But What About Slavery?

In 2020 we saw the Woke mobs vandalize and pull down Washington’s statues. So for his birthday, February 22, I’d like to address their main complaint that George Washington was a slave-owning bigot.

“The Last Will and Testament of George Washington” displays great humanity. We should all read it with our children. Washington composed it without a lawyer and only told those near his deathbed where to find it. (So I learned from a tour guide at Mount Vernon some years ago.) It’s striking how intelligent and knowledgeable he was while writing about dispersing assets, and how upright and generous too. He forgave most of his debts, and set money aside for a school for orphan and destitute children.

In the will, he freed his slaves upon the death of his wife, Martha. Why not free them sooner?

Legally, he couldn’t release those who’d come from Martha’s estate, before they married. (Remember that she’d been the widow of one of the richest Virginians.) Some of these people were married to the slaves he’d have been manumitting, and he didn’t wish to break up families. George insisted that his heirs take care of any slaves too old or infirm to leave or work, and educate slave children. He forbade the sale or removal out of state of a single slave.

A Collision Course for America

Washington saw how his newly founded constitutional republic was totally inconsistent with slavery. He struggled with the issue, and sincerely favored freedom. But he was enough of a realist to see how dependent many American citizens were on the institution, and fear it could divide the country into war. He expressed in a letter to Robert Morris his frustration in not getting a legislative vote to abolish slavery.

I hope it will not be conceived from these observations, that it is my wish to hold the unhappy people who are the subject of this letter, in slavery. I can only say that there is not a man living who wishes more sincerely than I do, to see a plan adopted for the abolition of it … . (Washington, From George Washington to Robert Morris, 12 April 1786).

Whatever the Woke mobs or Democrat-run teachers unions tell you, most of our founders understood the profound evil of slavery. (Compare that to our deep current divide about abortion!) As responsible politicians in a brand-new fragile country, they struggled with how to abolish it.

Teach Your Children to Be Americans

The left hates what America stands for. It wants your kids to believe that the US was founded as a conspiracy of slave-owners to stop King George III from setting them free. Tragically, monstrously, this same left controls education at virtually every level outside family home schools and a shrinking list of churches. So you have to do the work. Study up on solid works of history, such as Land of Hope, by Wilfrid M. McClay. Read our founders’ documents, and listen to their voices, at sites such as Founders Online. Learn what is really exceptional about America from books like Eric Metaxas‘ If You Can Keep It.

The only way we keep this country is to help our heirs understand, treasure it, and thank God for men like George Washington.

James Malloy is the author of Economic Clarity or Political Confusion. Go to econclarity.com for a sample read.