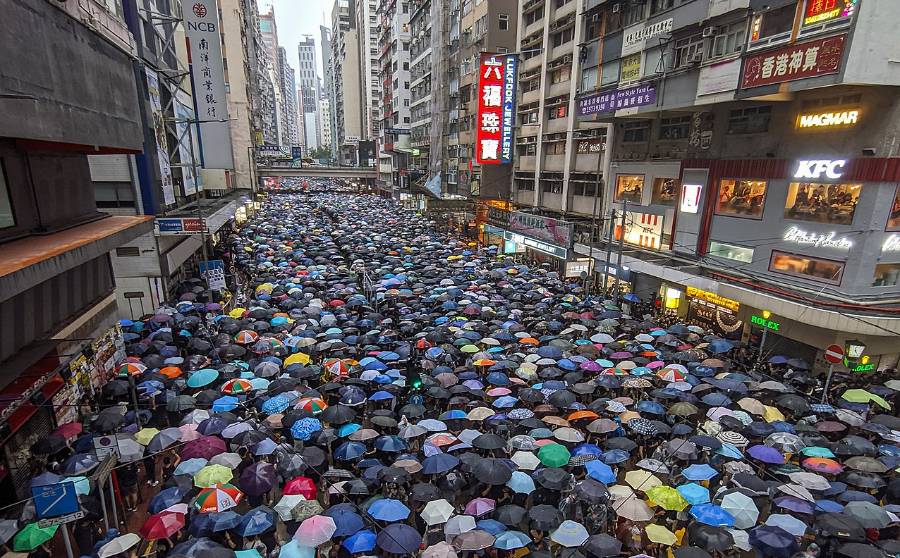 Some commentators find it remarkable that the Hong Kong protests have had such strong Christian influence. They observe that only 11-12 percent of the population is Christian. Yet the protesters have taken Christian worship song “Sing Alleluia to the Lord” (along with “The Star-Spangled Banner” and “Do You Hear the People Sing?”) as the movement’s theme song.

There are many plausible explanations for the Christian influence on the movement. Christians believe in freedom and the dignity of every person created in the image of God. Churches in Hong Kong are concerned that the Communist mainland regime will crack down on Christians in Hong Kong as they have in China. Hong Kong churches offer hospitality to protesters. All very true, and part of the reason why people of faith have disproportionate influence.

The Legacy of an Act of God

Some writers, pondering the “Sing Alleluia”[i] phenomenon reason that hymn singing was introduced to “calm the crowds and discourage police disruption.” That’s true. But I believe there is more to the Christian influence than that. I believe Hong Kong’s very streets — now filled with conflict — are saturated with prayer and with the power of the Holy Spirit. It is the legacy of an act of God that began half a century ago.

Hong Kong’s very streets — now filled with conflict — are saturated with prayer and with the power of the Holy Spirit. It is the legacy of an act of God that began half a century ago.

Some ten years before the British handed the city back to China I met an extraordinary group of Christians from Hong Kong when they visited Church of the Apostles in Fairfax, Virginia. A team of three Chinese, one British, and three American young people, they had been sent to the United States to share how God was moving in Kowloon’s notorious Walled City. I thought back to them immediately when I heard “Sing Alleluia to the Lord” permeating the protests.

This team from “Hang Fook Camp” (Camp of Blessings) brought Jesus’ love and salvation to those who lived in the Walled City, a place rife with crime, poverty, and misery. Triad gangs controlled the streets, prostitutes walked the streets, and heroin addicts died in the streets. Police hesitated to enter the place, but a young British woman was called there by God in the mid-1960s.

Jackie Pullinger and the Walled City of Hong Kong

When Jackie Pullinger met Jesus while a student at the Royal College of Music, He changed her life forever. In her autobiography, Chasing the Dragon, she wrote, “Reluctantly I told Him that I would believe what He had said — although I did not like it much. I was converted.”

Pullinger believed God was sending her out to share His love. Like Abraham, she took off for a far country. She boarded a ship and waiting for God’s nudge to disembark. In her case, that “far country” was 1966 Hong Kong. Pullinger didn’t know anything about the Walled City or the people that inhabited it. But she knew God wanted them to receive His love. She believed Jesus could heal them.

Twenty years later, the team from Hang Fook Camp told us amazing stories. They told us about prostitutes and Triad gangs and heroin addicts quitting the hell they were in and joining “The Christians.”

In her book, Pullinger related the testimony of one triad gang member, Ah Ming. He joined her Youth Club “especially to plan his strategy for gang war.” But to his shock, Jesus healed him instantaneously from heroin addiction. He gave his heart to the Lord. Not only that, but the next day when he was approached by rival gang members armed with knives and broken bottles, she continues:

Instinctively he picked up the nearest weapons — two heavy iron poles — and waded into the attack. … Suddenly Ah Ming thought, “Help, I was praying about peace on the boat this morning, I can’t fight.” He dropped the poles, sat down in the road and began to pray again.

A few minutes later he looked up to see his enemies surrounding him; they were all looking down at him curiously. “What are you doing?” their leader asked.

“I’m praying, I’m a Christian now — would you like to hear about it?” They nodded, dumbfounded, so Ah Ming told them what happened to him. They were so impressed that several came to see me later and began to attend meetings.[ii]

The Hang Fook Camp Christians didn’t just tell us about heroin addicts instantly delivered from addiction with no cold turkey side effects. One of the team was a former addict. His beautiful face not only radiated the love of Jesus, but he looked as if every mark and stain of addiction had been wiped away. (Frankly, he looked as though child-like joy and innocence was all he had ever known!) God does not always heal in this way, but for a place like the Walled City, such a testimony has great power. The author with the team from Hang Fook Camp, Hong Kong, at Church of the Apostles, in 1988. (Photo courtesy of Faith McDonnell)

When the Walled City came down, Hang Fook Camp continued to spread throughout Hong Kong and beyond. Now known as the St. Stephen Society, the ministry’s work with drug addicts continues. They live in community in hundreds of houses around Hong Kong, Kowloon, and the New Territories. And they have church congregations all over Hong Kong.

Back in 1987 at Church of the Apostles, our friends from Hang Fook Camp didn’t teach us “Sing Alleluia.” But they did teach us a song that was like their own theme song:

Father in Heaven, how we love You.
We lift Your Name in all the earth.
May Your Kingdom be established in our praises,
As Your people declare Your mighty works.

Thirty-three years later, I believe this is Hong Kong’s wild card. China has the military power and the political pressure. Hong Kong’s leadership and police appear to be under China’s sway. As protesters continue to protest, clashing violently with the police in most recent days, we cannot know what will be the outcome.

Hong Kong’s Christians are not skilled in political activism, nor are they people of power and influence. But God’s Kingdom came, and came in power, to the darkest corners of Hong Kong. The reign of God has been established in the lives of former drug addicts and gangsters and prostitutes. 1 Corinthians 1:27 explains that “God chose what is foolish in the world to shame the wise” and that He “chose what is weak in the world to shame the strong.” Maybe He will choose to do this again in Hong Kong.

[i] Sorry, but I sang this song in the 70’s as well, and every current media mention aside, it wasn’t “Sing Hallelujah,” but rather “Sing Alleluia” as written by Linda Stassen in 1974!