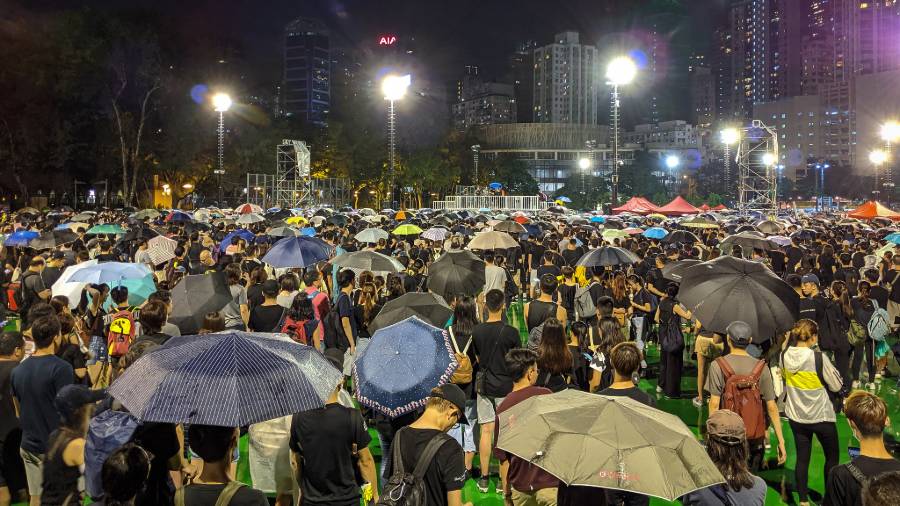 Protests in Hong Kong have been going on for months. Is there a Christian element to these protests that has been widely overlooked?

Hong Kong has a population of over 7 million people. Yet it has been estimated that, at one point in recent weeks, as many as a million protesters hit the streets.

Hong Kong has officially been a part of China since 1997, when it was handed back over after being a British colony and territory for more than a century.

They cherish their independence. CNN notes, “Many Hong Kong residents don’t see themselves as Chinese, but rather as Hong Kongers.”

That city enjoys a level of democratic freedom not experienced in mainland China, through “the Hong Kong Basic Law,” which CNN calls Hong Kong’s “defacto constitution. … It guarantees freedoms that are unavailable to Chinese mainlanders, such as the right to protest, the right to a free press and freedom of speech.”

“China will extend their reign of persecution if Hong Kong allows it.” — Wendy Wright

The recent protests began in reaction to an extradition bill that would have sent alleged criminals from Hong Kong to China for prosecution. If China lived by Romans 13, using the power of the state to punish evil-doers, perhaps there would be no such protests. The problem is who China defines as evil-doers.

Included in Communist China’s list of alleged evil-doers are religious leaders. Particularly under Chairman Xi, the head of China, the country has been cracking down hard on Christians and people of different faiths. Thus, this extradition law, had it gone into effect, could have allowed for the widespread persecution of Christians in Hong Kong, a city which has many churches and believers.

Being a Christian in China

Last year, for Christian television, I spoke with Wendy Wright, the president of Christian Freedom International. I asked her, “What’s it like to be a Christian in contemporary China?”

She told our viewers, “In China there have been reports for a number of years that Christianity is flourishing and growing and expanding, that there are an untold number of people who are becoming Christians in China. What we’re also seeing is a recent crackdown on Christians and on churches — crosses being destroyed off of churches, so people can’t tell this is a church. Churches are being destroyed, being bulldozed, Bibles online are being censored. … And so we see this silencing, this crushing of public displays of Christianity in China.”

Regarding the recent demonstrations, Wendy Wright told me: “The protests in Hong Kong have a Christian influence. Baptist pastor Chu Yiu-Ming gave an impassioned defense of his Christian faith at his sentencing in April — as the latest protests were beginning. … The 75-year old told the court, ‘Political freedom is more than loyalty to the state. It professes human dignity.’”

Wright also said, “After reports of police brutality, Christians helped make a safe place for protesters. Religious meetings in Hong Kong do not require police approval. The song ‘Sing Hallelujah to the Lord’ became an anthem. It is easy to learn and has a peaceful, calming influence.” Hong Kong protesters can be seen and heard singing this American Christian chorus in this piece from The Stream’s Aliya Kuykendall.

Wright added, “Christians in Hong Kong know the dire threat that China poses. The Chinese regime is arresting Christian leaders, shutting down churches, forbidding the teaching of children about Jesus Christ, installing face-recognition cameras in churches to identify Christians. China will extend their reign of persecution if Hong Kong allows it.” [Emphasis added.]

Pray for Our Brothers and Sisters

A widow from our church and her late husband have known a Christian leader from Hong Kong for decades. She told me that over the weekend she had sent him a text, saying that she was praying for him and for Hong Kong.

He wrote her back, “Thank you. We are in deep water. Deep pain, but hopeful.”

In our book, What If Jesus Had Never Been Born?, D. James Kennedy and I write: “The frightening thing about a humanist and atheistic state is that there is nothing beyond man to which one can make an appeal. The founders of this country said that men have been created equal and have been endowed by their Creator with certain inalienable rights.” Perhaps this is why some of the Hong Kong protesters are waving American flags.

In closing, Wendy Wright notes, “We need to be praying for our brothers and sisters in China [and Hong Kong] that their faith will flourish even under the persecution they’re facing.”