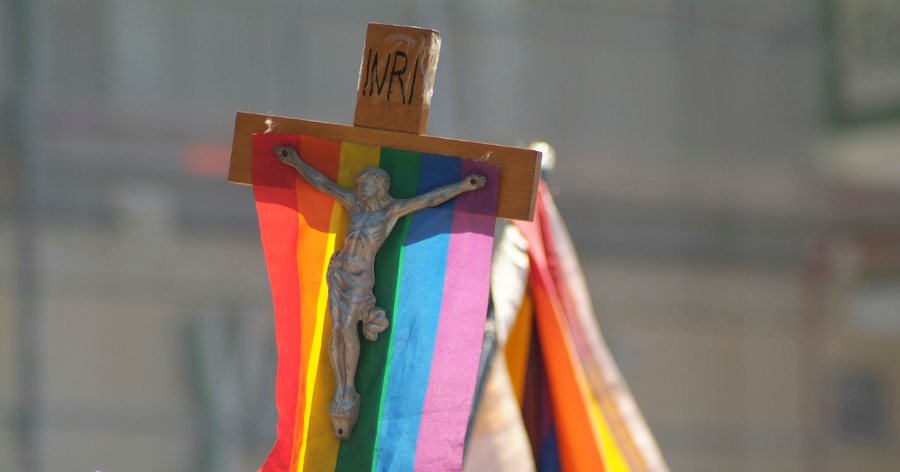 Dr. Tat-Siong Benny Liew holds an endowed chair at the Jesuit College of the Holy Cross. He has also published his theory of a female — or maybe sexless — “drag king Jesus.” His views came to light through a recent article by Holy Cross student Elinor Reilly, a senior, in the Fenwick Review.

Distortions of Jesus abound, especially around Easter. There’s a lot one could say about this one, so let’s get the most obvious out of the way. It’s outrageous, to start with; anyone can see that. But I don’t want to back away from calling it what else it really is — just in case other media have been shy to say it. It’s foolish, silly, disturbed, factually wrong, morally wrong, sacrilegious, misleading in every possible way, and thoroughly despicable.

And utterly inane, stupid, and ridiculous.

It goes without saying that the professor is seriously contradicting Catholic doctrine, not to mention all sound reasoning altogether. In a way, he’s replaying themes from the first Good Friday many years ago: seeking to subdue, embarrass and above all remove the real Jesus from the picture.

In a way, he’s replaying themes from the first Good Friday many years ago: seeking to subdue, embarrass and above all remove the real Jesus from the picture.

And yet it’s a great illustration of the point I made here at The Stream last Saturday: When people make outrageous claims about Jesus, the Church or Christianity, there’s one answer that works almost every time: “Where’s your evidence?”

Not Even a Desert Vapor of Evidence

The evidence Dr. Liew brings forth is thinner than vapor in a dusty desert canyon. And even that is being generous.

Much of his “reasoning” is too twisted to publish on this page. But here’s what seems safe to share:

Do you see “drag king” there? I sure don’t! No sane person could.

Of course if you know the New Testament, you see there’s nothing to this theory. Nothing, meaning (as one preacher put it) “zero with the rim kicked off.”

But even if you didn’t know a word of the New Testament, you could ask Liew, “Show me your evidence.”

The Real Evidence Goes in the Opposite Direction

But Jesus knew who He was. Indeed, He was supremely comfortable with who He was — even to the extent of stating quite matter-of-factly that He was the only way to the Father, and that He and the Father were one. He backed that up with miracles like no one else had ever done.

Jesus is very clearly the opposite of what Dr. Liew thinks He is.

He handled everything well.

There’s no one else in all history or literature who was so solid in their personal identity, so comfortable with who they are. In other words, He is very clearly the opposite of what Dr. Liew thinks He is.

Why Such a Huge Distortion of Jesus?

Professor Liew is responsible for teaching Holy Cross’s “primary New Testament class,” the New Testament, according to Reilly. He has a responsibility to his students. Why then does he suppose this is good thinking, good speculation, good teaching?

I can’t speak from direct knowledge of the professor, but I can at least relate what we see in him to what we’ve seen in other settings. Everyone wants to claim Jesus for their own. He’s a revered figure in Islam, Hinduism, Buddhism, Mormonism, Jehovah’s Witnesses, many New Age beliefs and more.

Everyone wants to remake Jesus in his or her own image. To the social justice warriors He was a social justice crusader. To the pacifists, “turn the other cheek” was His chief defining word. To the rebels He was a revolutionary.

Jesus still sets the agenda. For that first Good Friday was followed soon after by the first Easter, and Jesus’ glorious victory over all.

Jesus Won’t Bow to Our Agendas

So why wouldn’t drag queens and transgendered persons drag Him into their sphere, too? Especially in the world of higher education today, where factual evidence must bow before sexual- and identity-charged social agendas? This was bound to happen at some college somewhere.

The reality, of course, is that only in the religion and the way that Jesus founded can He be found for who He really is. And Jesus is firmly in control of His role and His identity. Even as a character known only on the pages of the Gospels, He still firmly resists adapting to any human agenda. After all these centuries He remains the most majestic person in all human history, towering far, far above the rest. By the power of His teaching and by the Holy Spirit among us, He still sets the agenda.

For that first Good Friday was followed soon after by the first Easter, and Jesus’ glorious victory over all.

The Story of Jesus is Too Good to Be False