He providentially survived Nazi death camps where his family and millions of Jewish brethren were killed. Last year Irving Roth shared his life story in a film — alerting believers to rising hatred and violence. 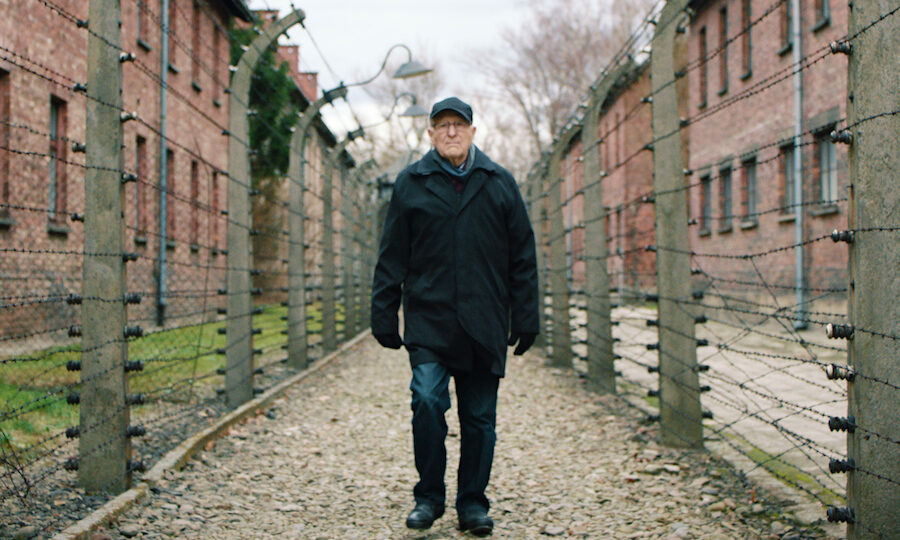 Holocaust survivor Irving Roth recounts his experience inside the Auschwitz death camp where he was held prisoner as a boy in documentary film Never Again, in select theaters nationwide on Oct. 13 and 15.

Note: The Stream has received word through Christians United for Israel (CUFI) that Irving Roth has passed away. As we await details, we wanted to re-run what may well be one of Roth’s final interviews, which took place with The Stream last October.

Irving Roth, founder of the Holocaust Resource Center in New York City, speaks with boundless energy that belies his 91 years of life. A survivor of the Auschwitz death camp during World War II, Roth cited a surprising source in our interview.

“One of my favorite quotes is from a fifth grader,” said Roth. “I was sharing my story at a local elementary school. After explaining all this, one of the boys raised his hand. He said, ‘If you stand by and do nothing, you’re helping the bad people.’”

For years, Roth has been on a mission to educate particularly young Americans on the dangers of anti-Semitism. The Jewish leader has found surprising allies in Christians United for Israel (CUFI), a nonprofit group founded by evangelical pastor John Hagee.

Having spoken often at CUFI events, Roth is now the subject of their first major documentary, Never Again. The film opens in select theaters on October 13, and is expected to release on-demand soon after. It’s particularly relevant as the Jewish high holy days conclude this week.

In a phone interview from his Long Island home, Roth recounts his astounding and harrowing life experiences … and warns of signs he sees of history repeating itself. It has been lightly edited for length.

You speak in the film about being a child in eastern Europe when Nazi Germany was on the rise. What began to change for Jewish families like yours?

Irving Roth: In 1939, the people of Slovakia elected a government that was fashioned the same way as Nazi Germany. That summer, all of a sudden, things begin to change.

As a 10-year-old, I went to meet my friends in the park. But I couldn’t because a big sign had gone up. It stated: Jews and Dogs Are Forbidden to Enter.

That afternoon, I went to the beach but was also turned away. I had to be identified in the street by wearing a star. Some of my friends wouldn’t talk to me because I was a Jew.

Within a year, I was thrown out of school as were all Jewish children. The separation of Jews from everybody else in town was a step-by-step process that moved quickly.

How did your family experience betrayal from your community and even close friends?

Roth: In the 1930’s, my father had a lumber business. He produced railroad ties by the tens of thousands and shipped them all over Europe. By 1940, Jews could no longer own a business. To prevent losing it, my father asked one of his friends, a Christian, to take over his business on paper. And my father would continue running it and compensate the friend for using his name, so to speak.

That was arranged, and a few months go by. One day, his friend comes to the office and says, “You’re doing a very good job running my business, so I’m not going to fire you. You may be the manager, but understand this business is mine.” This man had been a friend of my father for years and a previous business partner. Obviously, they were close. He takes away my father’s business, just because he can.

I call that a transformation. Because he was a perfectly wonderful friend, a Christian, who goes to church, who believes in God. Faith is part and parcel of his life, and my father’s life as a Jew — same thing, more or less.

Yet this man thinks nothing of stealing what my father had worked for. He thinks that’s perfectly OK, because the law allows it. It’s no longer stealing, because you’re taking away from a Jew.

Murder of Six Million Jews Began With A Meeting

When did this ideology of anti-Semitism — essentially, hatred of Jews — take root in Europe?

Roth: It all begins with words. The Holocaust did not start in 1942 when the gas chambers were built. It began in the late 19th century, where political figures and historians began to write on the evils of Jews and Judaism.

They made up stories about Jews, how we behave and who we are, which was all sheer nonsense. Jews are like everybody else: there are good ones and not so good ones. But the lies became a fundamental ideology which was infused into society. Hatred develops when people believe these made-up stories.

Any problem you have, you can blame on somebody. We tend to do that, right? When you lose a baseball game, it’s easy to say the pitcher lost it. Well, not really, because there are 10 others on the team who are supposed to hit the ball out of the park. But you blame somebody, and Germany in 1920 was a perfect example of that.

After losing World War I, the Nazi Party espouses this idea that they were betrayed by the Jews who caused their loss. Because of this, they planned to punish Jews. People bought into it. That manipulation of their minds and propaganda made it possible for Germany to elect a Nazi government, one that promoted hatred of Jews.

To return to your family’s story in 1941, what were the consequences of this ideology?

Roth: The objective of the Nazis was the total annihilation of every single Jew in Europe. In six months, they had managed to murder half a million Jews. They looked at that problem and thought, It’s going to take forever to get rid of all 10 or 11 million Jews, at the rate we’re going.

In January 1942 at the Wannsee Conference, in an hour and a half, this group of very intelligent, bright, sophisticated people came up with a plan of how to do that. Within a few months, they had started building six death camps.

That summer, on a Friday night in my town in Slovakia, Nazi police rounded up nearly all the Jews. They marched them into the synagogue, then the next day moved them to the train station. They shoved them into cattle cars, and they disappeared.

Because my father was running that business for his friend, my family bypassed the first deportation. Some of us escaped from Slovakia to Hungary, then forced into slave labor. All Jewish men between ages 17 and 60 were attached to the Hungarian army. During the war, the Jews were marched in front of the army to find explosive mines. Somehow my cousins, brother, and grandfather survived that.

By spring of 1944, my grandparents, my brother, and I and 437,000 Jews were all in cattle cars going to the Auschwitz death camp. There’s something called the selection process on the arriving platform. Within 24 hours, 90 percent of the Jews arriving at that transport were murdered and their bodies burned — including my grandfather, grandmother and many other family members.

All that was left of my family was my mother and father. Because, in addition to all the evil being done, some people hid Jews who survived. They said: “This is evil, and if anybody wants help, I will provide it.” My parents had escaped to Budapest and asked for help from a family living in the capital city. This righteous Christian family hid them in their apartment and my parents were saved.

Reasons for Concern Today — And for Hope

You survived significant violence and persecution when so many friends and family died. Is that something you still think about often?

Roth: Yes, I think about it and I speak about it. Because it’s necessary for people to understand how it’s possible to transform people. Perfectly reasonable people living in a democracy, through propaganda and evil, can be transformed.

Look at what’s happening today. I am seeing signposts on the road to Auschwitz. It begins with words. Many articles in mainstream media take facts and transform them into something that is not really factual. Today, hundreds of thousands of people think that Israel is an apartheid country that has committed genocide.

When giving talks in schools and universities, I’ve heard this claim not just from students but from professors. Yet Israel is the only democracy in the Middle East. Everyone who lives in Israel has full rights — they can vote, own a business, go to school, or whatever else.

I’ve been to Israel many times, quite often with young people. We take them on a tour of the hospitals, where Christians, Muslims, Jews, Hindus or anybody else who needs it receive medical care. That’s called apartheid? It’s an absolutely bizarre idea.

But words become slogans and slogans lead to actions. Those actions, unfortunately, have started. I’ve observed professors and students at universities, screaming and yelling: Kill the Jews. On the streets of Brooklyn, not far from where I live, orthodox Jews have faced violent attacks. This is the beginning.

For years, you have been allied with evangelical Christians who are pro-Israel, including with this film release. Have your friends in Jewish communities questioned that?

Roth: Some Jewish friends say to me, “Wait a minute, we have suffered for 2,000 years because ‘wonderful Christians’ want to get rid of us in Germany and Slovakia and other places. After all this persecution, can you really trust them?” My answer to them is: Look at their writing and theology.

Because CUFI and other organizations of similar nature state and stand by their theological position. They say: “We are Bible believing people. In Genesis, it’s very clear. God speaks to Abraham and says, ‘Those who will bless you will be blessed and those who curse you will be cursed.’ A Christian understanding of what the Bible really says is you should be good to all people, and Jews in particular.”

When you understand that, you realize these are wonderful people who take the Bible verbatim. They are part of what is today probably the largest single pro-Israel organization in the world. CUFI has about nine million people who believe in this cause and act on it.

They are involved politically, financially, socially, and in every way — on college campuses and in churches worldwide. This group is a very powerful force standing for the survival of the Jews.