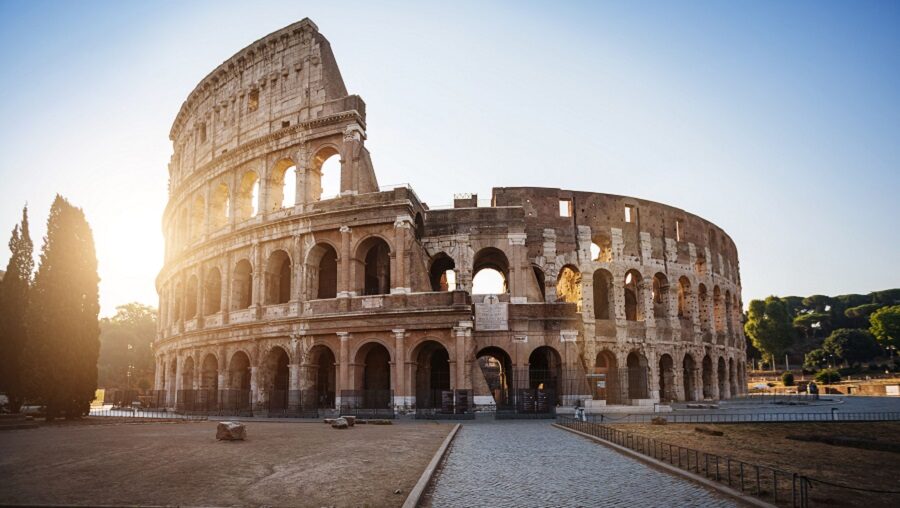 Christians know that history is going somewhere, in The End. The Bible starts with the creation and ends with the Second Coming of Christ, and a new heaven and earth. The Nicene Creed, which most churches recite on a regular basis, states that Christ will come again “to judge both the living and the dead.” And that we “look for the resurrection of the dead, and the life of the world to come.” Maybe tomorrow, maybe millennia hence. But ultimately, salvation history is linear.

What about secular history? Yes, God works in that history. (In fact, in a certain sense there’s no difference between sacred and secular history. But for the sake of argument, I am positing one.) He chose Abraham and his descendants to learn that there is only one God. And He safeguarded them for millennia with that message. The Triune God arranged it so that the Son would be born in the Roman Empire, “under Pontius Pilate” (the Creed again), so that His followers could take advantage of the roads, postal system and Pax Romana.

God converted Constantine. Sent Cyril and Methodius to pagan Rus. Preserved the Church of Rome when the Empire collapsed and the barbarians came. Rebuked that same Church with Luther. Helped the Frank Charles Martel, the Austrian John, and the Pole John Sobieski defeat invading Muslims. Allowed Christianity to spread, in both Catholic and Protestant forms, around the globe. Such that it became the world’s largest faith. Sustained the Orthodox under Islamic, and Communist, rule and oppression. Thus keeping His word: “heaven and earth will pass away, but my words will never pass away” (Matthew 24:35).

That much is most certainly true. Yet God also allowed, if not sent, the Assyrians and Babylonians to chastise the Israelites for falling away. The same Roman Empire crucified the Son of God. And persecuted many of His followers. God allowed bad, nay horrible, popes as well as good ones. Ditto for Byzantine emperors and patriarchs. Muslims — Arab, Ottoman or other — reprised for Christendom what the ancient conquerors had been for the Jews. For that matter, He permitted Marx as well as Muhammad to inflict their views on the world. And still does.

So while God is certainly in control of the whole book of history, He also allows humanity to write its own chapters and pages therein. Which means we see a lot of the same themes over and over again, across space and time (as historians like to say). Thus, secular history often seems to be repeating itself. So rather than linear, it’s cyclical. Particularly when it comes to political matters and systems. There have been four major thinkers who have advanced such a cyclical view of history.

The first was the brilliant 14th century Arab Ibn Khaldun. He wrote seven volumes of history, mostly on North Africa. But in the first, al-Muqaddimah (“The Introduction”), Ibn Khaldun attempted a global analysis of the topic. For him, civilizations rise and fall on regular basis when the sedentary ones are taken over by nomads, or barbarians. The latter then create their own such civilization, only to be challenged and eventually conquered by a fresh group of steppe or desert warriors. And so on.

What empowers the “uncivilized” to win is what Ibn Khaldun called `asabiyyah. This is “group feeling” or “group solidarity” which naturally develops, if you will, as a means of preservation in the wilderness. It is possible for a sedentary civilization to produce `asabiyyah, artificially, as it were. Religion is a good way of doing this. But by-and-large, natural group feeling is more potent. And the average life-span of a civilization was about 120 years (three generations).

The great Arnold Toynbee came up with a cyclical history paradigm somewhat similar to Ibn Khaldun’s. His 12-volume A Study of History came out between 1934 and 1954. In it Toynbee also saw the engine of history as challenge and response. He posited that there have been some two dozen distinct civilizations throughout human history, of which seven survived in the 20th century. Like his Arab predecessor, Toynbee saw barbarians — which he called the “external proletariat” — as crucial. But unlike Ibn Khaldun, he saw them as a symptom, not a cause, of civilizational collapse.

Earlier in the last century, the German intellectual Oswald Spengler also advanced a cyclical theory. Right after World War I, he wrote only two (but very dense) volumes entitled The Decline of the West. Spengler made more of culture than Ibn Khaldun or Toynbee. (Civilization is, in effect, a society’s hardware. Culture is its software, or operating system. But there is a great deal of overlap between them.) Before civilization or culture can decline, they had to incline. Thus, rise and fall. He saw Western civilization on its last legs a century ago, and predicted its collapse by 2000 AD. Which would then be followed by several centuries of “Caesarism.”

The last proponent of cyclical history is far more famous for something else. C. Northcote Parkinson was a British naval historian who spent much of his life in Malaya. He is most well-known for the law named after him, which stated that “work expands to fill the time available for its completion.” But in 1958 he published a brilliant book, The Evolution of Political Thought. The most salient aspect? His paradigm of human political systems. They commence with monarchy. That devolves into oligarchy or aristocracy. Democracy grows out of that. Then it collapses, and some sort of dictatorship emerges. Which then institutionalizes into monarch. Rinse (often in blood) and repeat.

A Recipe for Despair?

What do we get when we combine these four approaches? A depressing outlook for our civilization. Do we even have an American group feeling any longer? There used to be agreement on the idea of America. It was based on life, liberty and the pursuit — not the certainty — of happiness, especially in the economic realm. But the Left, after decades of effort, has convinced many young people that the US is racist, evil, and not worth preserving. The external proletariat is now a sizable minority, if not majority, within our borders. (As if we even have those.) So maybe we have been running on fumes since 2000. The Left claimed Trump was trying to be Caesar. If so, he did a lousy job. And Biden is too dementia-riddled to be Emperor. But the Deep State itself might be the Dictator the Left has been waiting for. So is our democracy dying — not in darkness, but in desperation?

There Is Always Hope

Maybe. But the faith has survived in monarchies, aristocracies, democracies and dictatorships. Even theocracies. Christianity has also lived in, and outlived, whole civilizations. Should the American republic collapse into something else, the Church will persist. After all, the Architect of all history promised that the gates of Hades shall not prevail against it (Matthew 16:18).