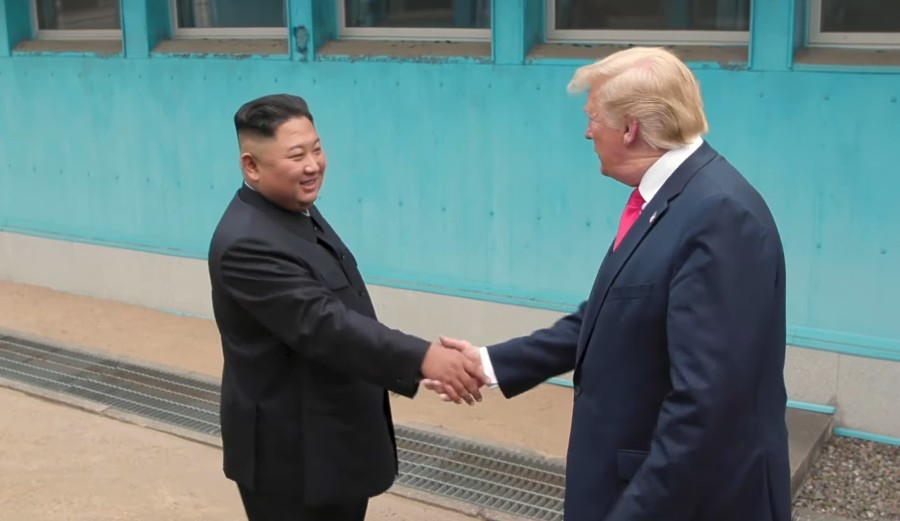 History met with drama today, as President Donald Trump and North Korean leader Kim Jong Un held a near-spontaneous meeting in the Demilitarized Zone. The drama was heightened when Trump actually ventured with Kim into North Korea, becoming the first U.S. president to set foot in the secretive Communist enclave.

“I was proud to step over the line,” Trump said, while sitting with Kim in Freedom House on the South Korean side of the border. “It was a great day for the world.”

After some very important meetings, including my meeting with President Xi of China, I will be leaving Japan for South Korea (with President Moon). While there, if Chairman Kim of North Korea sees this, I would meet him at the Border/DMZ just to shake his hand and say Hello(?)!

Kim said he was surprised by the invite. “I believe this is an expression of his willingness to eliminate all the unfortunate past and open a new future,” Kim said of Trump, according to the AP.

New White House press secretary Stephanie Grisham had a bumpy, bruising introduction to her new gig. Literally. Grisham got bruised up by some North Koreans as she pushed to get American reporters into position to cover the historic meeting. “It was an all-out brawl,” reported CNN’s Jim Acosta.

Although Trump originally called the proposed meeting just a chance to “shake his hand and say Hello(?)!,” the two ended up meeting privately for 50 minutes. Speaking to reporters afterwards, Trump said he and Kim agreed to restart nuclear talks within weeks.

“Blessed are the peacemakers. For they shall be called children of God.”

Leaving South Korea after a wonderful meeting with Chairman Kim Jong Un. Stood on the soil of North Korea, an important statement for all, and a great honor!