Herod did the heroic thing in having all those little boys killed — heroic from the world's point of view. 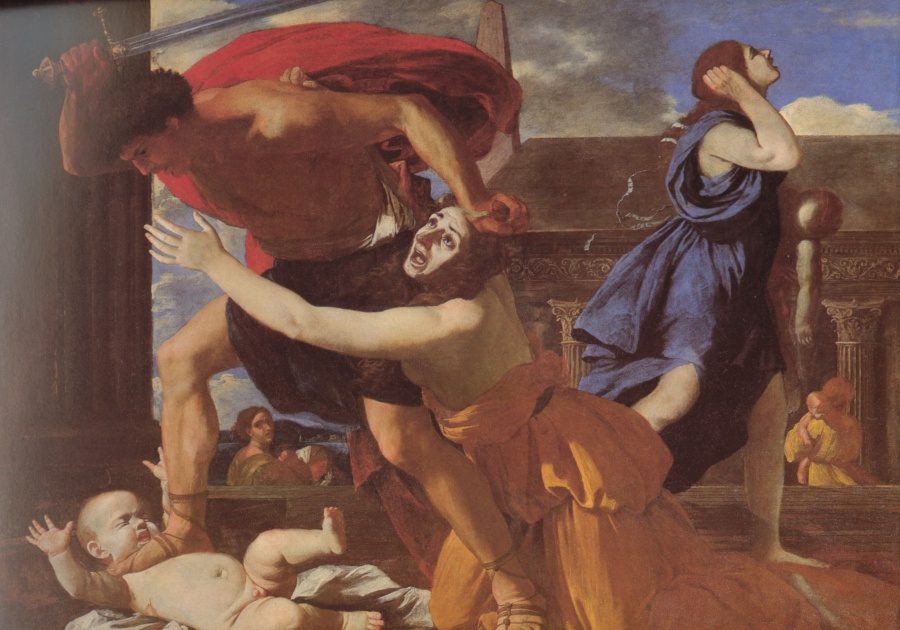 Herod was a man of his world. He did what the world expected him to do, and he did it well. The Romans set him to rule a difficult and rebellious people, and he kept them under control. Wasn’t easy, ruling the Jews. They’d survived a long time, being oppressed by one nation after another. Those nations disappeared. The Jews remained. They were tough.

Worse, from the Romans’ point of view, they worshiped their own God and only their own god. Every other people the Romans conquered bent a little. They added Rome’s gods to theirs, happy to worship them too. They didn’t mind worshipping Caesar when the Romans told them to. That was the rule in the ancient world: We conquer you, you worship our gods. You want to keep worshipping your own gods alone? Don’t get conquered, you losers.

The Jews, though, the Jews just wouldn’t play ball. That meant that in one part of the empire, a whole people believed that something was greater than Caesar, was bigger than Rome. Someone else came first in their hearts and minds. Not Caesar. Not Rome. The God of Abraham, Isaac, and Jacob. That made them dangerous.

Herod was a kind of hero. He took on the tough job and he did it. He was a hero of the world. But what does the world want?

Today we remember the Massacre of the Holy Innocents. Matthew’s gospel tells us the story. Some guys from another country — we call them the Magi — show up in Jerusalem and start asking people where they can find the new king. Herod doesn’t like that idea. He asks his advisors where the Christ will be born. They say Bethlehem. He tells the visitors to look in Bethlehem and to tell him when they find the child, so he can worship them too. He is, of course, lying.

God warns the Magi in a dream to go home without telling Herod, and tells Joseph to take Mary and Jesus away to Egypt to hide. Herod realizes he’s been tricked and comes unglued. He orders his soldiers to kill every little boy under two. To make sure he got the right boy, he had every little boy killed, not just in Bethlehem, but in the whole area.

Why did Herod order all those little boys killed? Just to make sure one of the little boys in that town wouldn’t grow up to fight Rome for control. This kid might grow up to challenge the might of Rome. If he was really the Christ, the anointed on, he might do it, too. Herod couldn’t risk that. He couldn’t even risk Rome hearing that he’d let the boy live, knowing what he knew.

His evil was even worse than that. It wasn’t just political. Remember that he asked his advisors where the Christ would be born. He knew who he was killing. He wanted to kill the Messiah. Herod wanted to murder God’s anointed one. In other words, he wanted to claim this world for himself and his Roman rulers. He shook his fist at God and said: It’s ours, not yours!

They Wanted Him Dead

Herod was a man of his world. So, thirty years later, was Pilate. The first wanted Jesus dead in case the Magi were right about him. The second wanted him dead because keeping him alive would only upset the people he had to keep under control. They both calculated that Jesus was better dead than alive.

That made Herod and Pilate heroes of the world. Because the world wants Jesus dead. The world says to God, it’s ours, not yours. Jesus innocent? Who cares? He must die, because if he doesn’t die, he’ll rule.

But we can’t leave the matter there, with those wicked men, Herod and Pilate. Because we can be them in our own small way. More often Pilate than Herod, but still, we let Jesus die. We too say to the Lord of the universe: it’s ours, not yours. We can want Jesus dead in our lives. Or maybe just part of our lives. Because if he doesn’t die, he’ll rule.

What does Jesus ask of us? He asks us to be children ourselves. Jesus says, “Truly, I say to you, unless you turn and become like children, you will never enter the Kingdom of Heaven.” Humble yourself like this child, He tells us.

Humble yourself, and make yourself vulnerable. That’s the twist. When we become his children, the world may treat us as Herod treated the little boys in Bethlehem, and for the same reason. It wants Jesus dead. To get Him, it’ll go after everyone around Him. The more you look and sound like your Lord, the more Herod will hate you.

Jesus escaped Herod’s soldiers, but He didn’t escape Pilate’s Cross and Tomb. The world usually gets what it wants. The world wanted Him dead, and it killed Him. But He lives. His children will rise with him, no matter what the world’s Herods do.

Note: The ending of this article has been revised since publication.