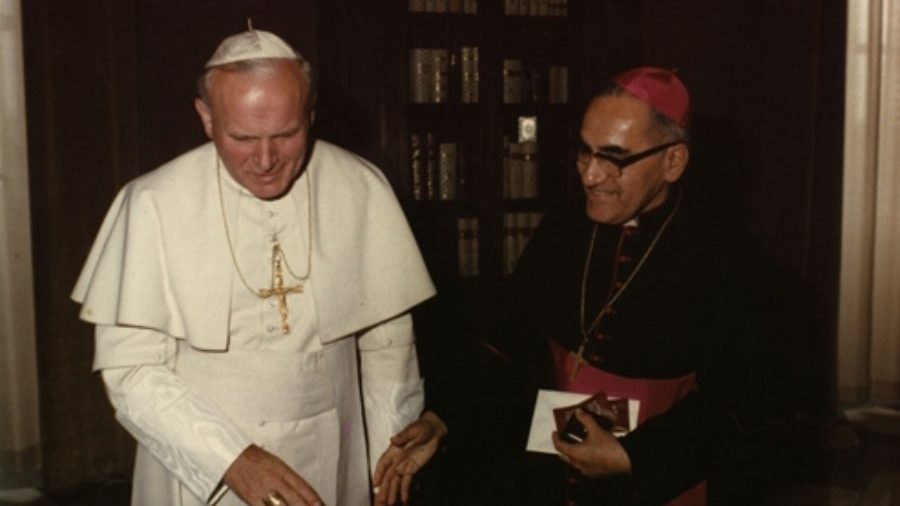 Archbishop Oscar Romero meets with Pope John Paul II in May 1979. Romero, the leader of the Catholic Church in El Salvador, was assassinated ten months later.

The killing shocked the world. It happened in what we think of as a safe space. A pastor leading a service, just finishing his homily — shot dead by an assassin with a rifle who fired through the church’s open doors.

Oscar Romero, the Archbishop of San Salvador, had spoken continually against the state-supported death squads that terrorized his country. He knew they would kill him for that, but he believed that as a Christian of his status — he was the leader of the Church in El Salvador —he had to speak. He had to speak up for the victims, but also call the killers to repent.

When We Despise the Poor, We Ignore the Face of Christ

This is the norm by which Christ will judge us. His kingdom is love, a love that builds us up.

As Pope Francis said, in his homily, Romero “left the security of the world, even his own safety, in order to give his life according to the Gospel, close to the poor and to his people, with a heart drawn to Jesus and his brothers and sisters.” He was canonized with his friend and supporter, Pope St. Paul VI. (See this article for more on him.)

Here are some insights and wisdom from St. Oscar Romero. Most are taken a collection of his writings called The Scandal of Redemption. The book itself testifies to the martyr’s influence. It’s published not by a Catholic publisher, but by an Anabaptist publisher called Plough.

On who Jesus is. God did not come to save humankind except through Jesus Christ, the only mediator. Blessed are those who know and believe in Jesus! Blessed are those who are aware, even in the midst of these dark hours of our history, that Christ lives! He lives powerfully as God, and he lives caringly as man. He is the way to know humanity, just as he is the way to know God. No one can come to God except across this bridge, this way that is our Lord Jesus Christ.

On where to find Jesus today. If we want to find the child Jesus today, we shouldn’t contemplate the lovely figures in our nativity scenes. We should look for him among the malnourished children who went to bed tonight without anything to eat. We should look for him among the poor newspaper boys who will sleep tonight on doorsteps, wrapped in their papers. In taking all this upon himself, the God of the poor is showing us the redemptive value of human suffering. He is showing us the value it has for redeeming the poverty and suffering, which are the world’s cross.

From the homily the archbishop gave just before he was assassinated:

Many do not understand, and they think Christianity should not get involved in such things [as working for justice and peace]. But, to the contrary, you have just heard Christ’s gospel. One must not love oneself so much as to avoid getting involved in the risks of life which history demands of us, that those who would avoid the danger will lose their life, while those who out of love for Christ give themselves to the service of others will live, like the grain of wheat that dies, but only apparently.

If it did not die, it would remain alone. The harvest comes about because it dies, allows itself to be sacrificed in the earth and destroyed. Only by destroying itself does it produce the harvest.

We are warned that it profits one nothing to gain the whole world and lose oneself. Nevertheless, the expectation of a new earth must not weaken but rather stimulate our concern for perfecting this earth, where the body of the new human family grows, a body that even now is able in some way to foreshadow that new age. And so, to the extent that temporal progress can contribute to the better ordering of human society, it is of serious concern for the Kingdom of God, even though temporal progress must be carefully distinguished from the growth of Christ’s kingdom.

On Repentance and Holiness

On sharing Jesus with others. Jesus saved the world with an objective redemption, we might say, by dying on the cross and leaving us the fountain of redemption. But his disciples have to set up channels to distribute this saving work to the whole world.

On repentance and forgiveness. Sisters and brothers, in Heaven there are no criminals. The greatest criminals, once they have repented of their sins, are now children of God. In Jesus’ time the respectable folk kept pointing at the prostitute Mary Magdalene even when she was weeping for her sins: “Look, if he were really a prophet, he would realize who that woman is who is touching him” (Luke 7:39). But Christ came to her defense: She is no longer a sinner, for she has loved much and she has repented of her faults. She is already Saint Mary Magdalene (Luke 7:47). The sins of the past no longer count; they dissolve.

Some of the quotes have been slightly edited, with some things removed but not marked with ellipses, for example.