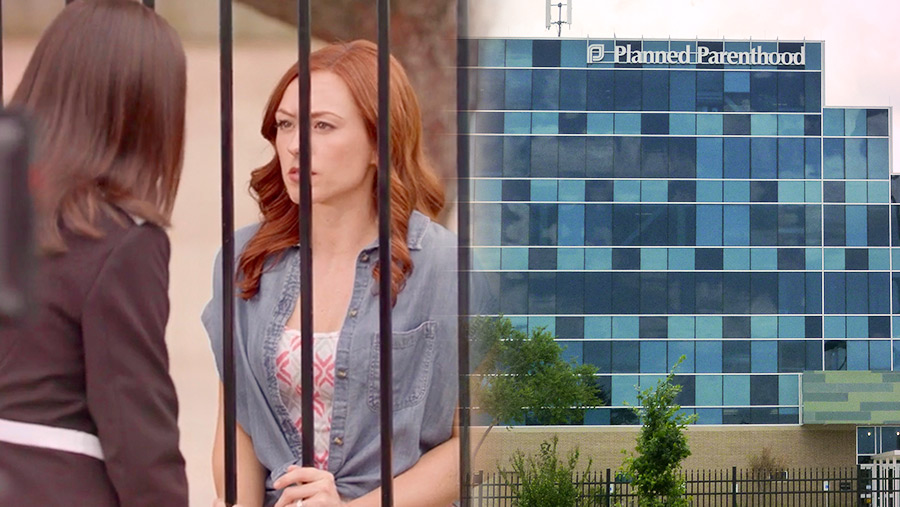 In a movie review, the first question you want answered is whether you’ll enjoy it if you go see it. With Unplanned, the answer is yes. An emphatic yes. I was nailed to my seat, with tears of sadness and hope in my eyes, all throughout this movie. By the end, the folks in my Dallas theater seemed like they wanted to hug each other. The credits hadn’t finished rolling before I was on Twitter calling for my friends to go see it too.

Unplanned is a story of the extraordinary, hiding among the ordinary. First of extraordinary evil, lurking behind the pink plastic water bottles and plastic surgery smiles of Planned Parenthood and its leaders. Of crass, despicable lies told nationwide on a massive scale.

Of tens of thousands of high school or middle school girls pressured into sex. (Often by older men in acts of statutory rape.) Then dumped in icy clinics.

Girls lied to by the counselors, who routinely pretend that a tiny human with a working heart and brain is a “lump of tissue, like a polyp.” Girls told they have no alternatives, no hope, and really, no choice. Girls drained of their baby and their money, then almost shoved out the door to make room for the next “client.”

Because as Planned Parenthood’s executives make clear behind closed doors, theirs is an “abortion business…. ‘Non-profit’ is a tax status, not a business strategy.”

An Insider Exposes the Truth

Abby Johnson told this story because she lived it. And it must have taken great courage to write it. Because she knew better. She grew up in a pro-life home, with loving Christian parents. Her fiancé, then husband, was a pro-life believer too. She’d had two ugly abortion experiences with Planned Parenthood herself.

And yet she went from a volunteer to working as a counselor in a clinic. Then clinic director. Then Planned Parenthood’s “Employee of the Year.” As she admits, Johnson became the best “abortion salesman” they had. Driven by ambition and a “can-do” spirit, she repeated on these girls the same evils she had suffered. She even followed the clinic director — a brilliantly portrayed ice queen straight out of the Brothers Grimm — into the “POC Room.” That means “Pieces Of Children,” a fellow clinic worker darkly jokes. And indeed it does.

Johnson works with the clinic director, sorting through tiny bodies, counting the arms and legs, to make sure that no part of the child got left inside its mother. But she’s not horrified. She’s fascinated. That tells the director she has found herself a protégé. And indeed, she steps in and tries to become a foster mother for Abby. (Interestingly, there’s a close physical resemblance between the actresses playing Abby’s mother and the clinic director, who’s a high-fashion, wire-monkey replacement for Abby’s real mom.)

Her Pro-Life Christian Family Prays, It Seems in Vain

By halfway through the movie, you find your sympathy for Johnson mostly exhausted. You’re as exasperated and disappointed in her as her long-suffering parents and husband. The low point comes when she returns from a grueling day shoving through abortions before an impending hurricane, to be greeted by her husband and adoring five-year-old daughter. The little girl asks “Mommy, why do you have blood on your shoes?” Abby doesn’t skip a beat, but lies to her daughter about a patient with a nosebleed. Right in front of her husband. Fed up, he demands of Abby, “Are you proud of yourself?”

Unplanned is a story of the extraordinary, hiding among the ordinary. First of extraordinary evil, lurking behind the pink plastic water bottles and plastic surgery smiles of Planned Parenthood and its leaders. Of crass, despicable lies told nationwide on a massive scale.

I don’t want to give away the story. Suffice it to say that ordinary discoveries about Planned Parenthood’s abortion “business model” and the real character of her mentor combine with extraordinary, prayer-driven moments of supernatural grace. And Abby has an epiphany. Indeed, the movie begins with that epiphany, then circles back to explain it.

One of the key factors in her awakening? The gentle, long-suffering witness of pro-life volunteers from Forty Days for Life. Abby’d got to know these people literally through the fence of the clinic where she worked — and where they prayed, day in and out, for the mothers who went through its doors. Their kindness and Christ-like patience, stretched out through the years, is a glaring contrast to the dehumanizing greed and ambition she’d seen in the upper echelons of Planned Parenthood. So the mystery of Grace plays out through the work of ordinary believers, pouring out their hearts and tears on stony sidewalks.

Those are all excellent reasons to see this movie. And bring a friend. Better yet, drag along a friend who’s not solidly pro-life. Such people need to see it. America needs to see it.

Resist the MSM. Make This Movie a Blockbuster

These are also the reasons why the Mainstream Media doesn’t want you to see Unplanned. Several TV networks, including even the Hallmark Channel, refused to accept any ads. Twitter did a Pearl-Harbor style sneak attack on the movie, closing down its account on the film’s opening day. (After a storm of a protest, Twitter reversed itself, but kept on stripping the Unplanned account of followers. I myself signed up to follow it several times, and saw my “Follows” cancelled.)

And yet, despite all that resistance, we see Unplanned succeeding. As Lila Rose, who did pioneering investigative reports on Planned Parenthood reports:

Most TV networks rejected ads for the film. Most media groups wouldn’t report on it. MPAA gave it an “R” rating. Despite being in only 1/4th of theaters, @UnplannedMovie closed opening weekend in the top 5 nationwide! It’s now expanding to 1700 theaters! #unplanned

And here’s some even better news, from the film-makers themselves. Perhaps the great Twitter itself has been spooked out of its censorship efforts:

Today we passed #PlannedParenthood in followers.

The tide has shifted as the world is exposed to the reality of what happens behind the curtain in #unplannedmovie #whatabbysaw is changing hearts and minds #godisgood
300K by midnight !!!?? R/T pic.twitter.com/DfGosYjGHc

The Hollywood Reporter, to its credit, reported honestly that Unplanned in its first weekend doubled industry estimates of its box office totals.
Help keep this trend alive. Help Unplanned reach a thousand, then ten thousand more theaters. Go see it, follow it, and tell your friends. And keep on praying. As the film itself makes clear, that’s always the factor that tips the balance, in ways we may never see this side of the glass, which we squint through darkly.