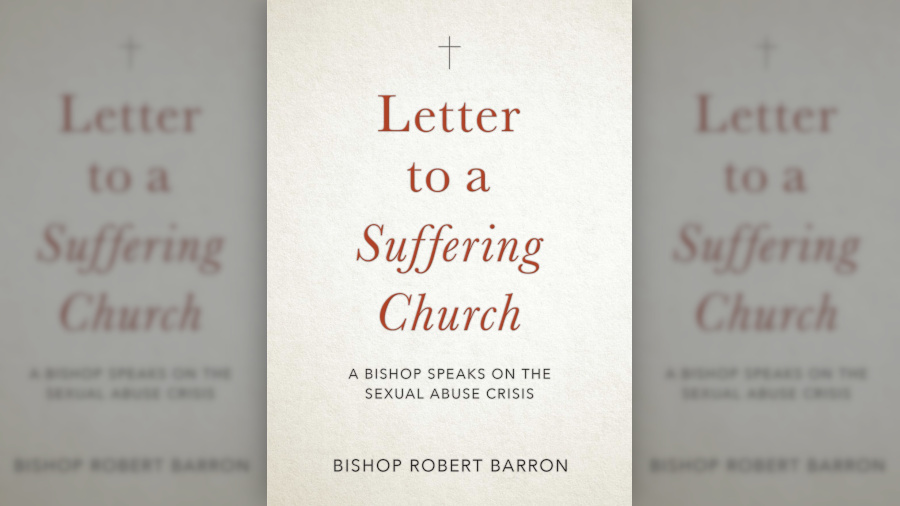 Letter to a Suffering Church: A Bishop Speaks on the Sexual Abuse Crisis by Bishop Robert Barron.

Ancient Jewish scribes counted every letter and every word of their manuscripts. Thus they knew the exact center of every book of the Bible and gave special consideration to whatever was there.

Canto 17, line 70 of Dante’s Purgatorio is the exact center of the Divine Comedy. There Dante stands on the terrace of the slothful, halfway up Mount Purgatory. He is halfway through the journey from “that wilderness so savage, dense, and harsh” to the beatific vision when exhaustion can bring on sloth in the pilgrim (and in the reader).

I thought of all this as I got to the middle of Bishop Robert Barron’s Letter to a Suffering Church: A Bishop Speaks on the Sexual Abuse Crisis.

“This book,” writes Barron, “is a cri de cœur, a cry from the heart. … The sexual abuse scandal has been for me, for millions of other Catholics, and especially for the victim-survivors, lacerating.” Many, he notes, have left the Catholic Church. Some have gone to other churches. Others — perhaps the majority — simply left.

Others of us stay on with “frustration, anguish, and fury” that Barron notes “are grounded in a deep love for the Church and what it stands for.”

His encouragement begins by noting that “we’ve been here before in our history and we’ve survived.”

Look at the Old Testament and the history of the people of Israel, he suggests. Look at Lot and his Sodom-tainted daughters, Eli’s priest sons sexually exploiting the women who served at the Tent of Meeting, David’s adultery and the national chaos his sin produced.

The Cancer of Sodomy

Similarly, Barron writes, “The Church from the beginning and at every point in its development, has been marked to varying degrees by sin, scandal, stupidity, misbehavior, misfortune, and wickedness.”

A cursory reading of 1 and 2 Corinthians should cure us of the fantasy that there ever was or ever could be a “pure New Testament” church. And church history confirms that.

Barron cites examples of papal and episcopal malfeasance as he nears the center of his book where he quotes St. Peter Damian. Damian, in a 1049 letter to Pope Leo IX, complained, “The befouling cancer of sodomy is, in fact, spreading so thorough the clergy, or rather like a savage beast, is raging with such shameless abandon through the flock of Christ.”

More than that, writes Bishop Barron, Peter Damian’s “greatest scorn — and how startlingly contemporary this sounds — was directed at bishops who acted out sexually with young priests and seminarians.”

A Culture in Need of Spiritual Reform

When it comes to sex, our culture resembles the late Roman culture G.K. Chesterton described in his biography of St. Francis of Assisi. “In the Roman Empire also,” he wrote, “long before the end, we find nature-worship inevitably producing things that are against nature. … Thus the effect of treating sex as only one innocent natural thing was that every other innocent natural thing became soaked and sodden with sex. For sex cannot be admitted to a mere equality among elementary emotions or experiences like eating and sleeping. The moment sex ceases to be a servant it becomes a tyrant. There is something dangerous and disproportionate in its place in human nature, for whatever reason; and it does really need a special purification and dedication.”

In this, Chesterton answers priests and bishops who want to be celibate-ish — engaging in sex with men or women even if it’s adults and consensual. Flouting celibacy adds to our cultural decay. It adds to the sexually soaked atmosphere and encourages the exploitation of others including children. Don’t forget that the campaign to lower the age of consent to fifteen or so is alive and well.

Only spiritual renewal can heal the Church and allow us to get back to the work of healing the world.

He also answers those who wish a non-celibate, married priesthood. The strange belief in our culture that “man does not live by bread alone, but needs sex” is a lie that must be purged. As Chesterton commented, “Nothing could purge this obsession but a religion that was literally unearthly.” Celibate priests contradict the world and its obsessions. They witness to a saner way of life and thereby purify the world.

The sexual abuse of children — mostly teenaged boys — by priests, bishops, and religious did not arise out of nowhere. It’s cause is spiritual decay. And as is the case with all sin, rules and protocols, while necessary, will not fix the problem on their own. “What is especially needed,” writes Bishop Barron, “is a deep and abiding spiritual reform. And this ought to begin with the priesthood … very much including lay men and women.”

Only spiritual renewal — including the renewal of celibacy among those vowed to celibacy and renewal of chastity among the laity — can heal the Church and allow us to get back to the work of healing the world.