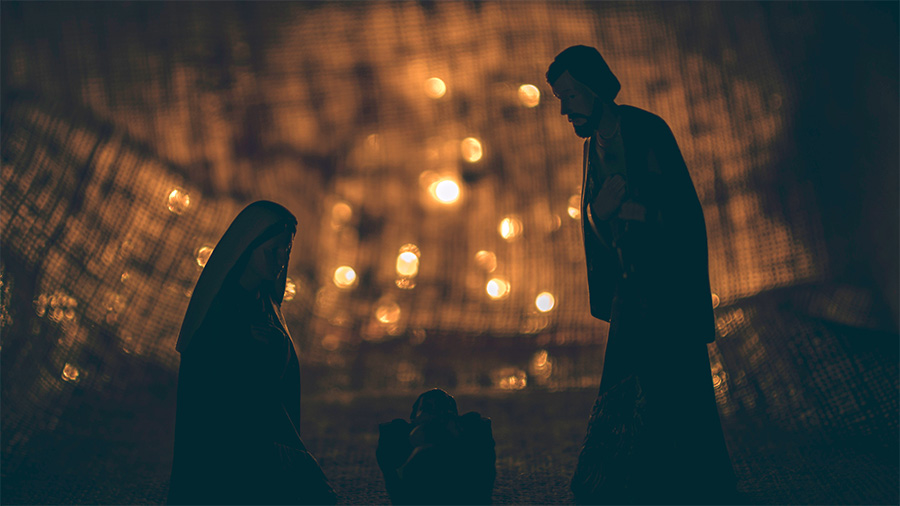 When my wife Rusty and I were the Passion Arts Ministers at our old church in Los Angeles, our main responsibility was creating and staging original productions, particularly musicals and plays around Christmas. It took a couple years, but we finally learned one truth: God does the casting. A quick example:

A couple weeks before opening our show, A Christmas Scene, a huge problem sprung up. A major cast member was not going to be able to make one of the performances. What to do? Fortunately, Chuck had come across a guy on his work route who had done a bit of acting (he said) when he was young, but hadn’t hit the boards in years. He agreed to fill in.

John came to rehearsal. We figured since he was so kind to help out, we offered him, sight unseen, the part of the town’s founder and pastor for the surprise scene at the end.

We did a read through of the play. John sat quietly behind the rest of the cast. We get to the ending flashback scene. And from behind me comes this resounding voice from the very depths of heaven and time, “Heavenly father … ” One cast member swore she heard the voice of an angel.

By the time John finished his soliloquy several cast members were crying.  I was crying and laughing. I knew the show would be a success. “If that’s my ending, I could mess everything else up and it won’t even matter.”

The actor’s name is John Welsh. He wasn’t some guy who had done a little acting. He had been part of a band of actors in the Midwest. Some went to Chicago to form the famed Steppenwolf Theater. Others, like John, came to Hollywood. You may know some of his buddies: Gary Sinise and John Malkovich. While they went onto stardom, John married and gave up the biz.

John’s Godwink appearance in A Christmas Scene was his first performance in 30 years. But more than just leaving audiences quaking, it reignited in him the acting bug. John has been starring in and directing award-winning productions up and down California ever since. Blessing audiences and actors with the gift that had laid dormant for decades … until his “chance” encounter with Chuck. God casts.

Hear John speak and you can immediately picture him as a 19th century southern man of God. In other words, you’d cast him too. However, in the original Christmas production, God cast himself. And He cast himself in a role nobody could have imagined.

A babe in a manger.

A few years ago, a mega-church around here put on a massive Christmas production. Huge. In one sequence, they had a Linus character come out, recite the nativity narrative as he did in A Charlie Brown Christmas. A character who was not a believer said, “That’s boring. That’s not how a king should be born, it should be like this!” And the entire cast broke into an epic version of “Circle of Life” from The Lion King.

Would that be what you’d be expecting if you were a Second Temple Jew awaiting the Messiah? The King of Kings? And if God was to make an appearance, wouldn’t it be as it was in the days of Moses? Fire and blinding glory?

God cast Himself as the lowest of the low. A helpless child of a young bride of little means and stature. Not in a pristine palace, but amid animals and muck. Not as a “high priest unable to sympathize with our weaknesses,” as Hebrews put it, but as one who would know first-hand our temptations, our hardships, our struggles. One who knew He came to conquer death but would weep at the passing of a friend.

In Philippians, Paul spoke of Jesus Christ, the Creator casting Himself as Servant:

Who, being in very nature God, did not consider equality with God something to be used to his own advantage; rather, he made himself nothing by taking the very nature of a servant, being made in human likeness. And being found in appearance as a man, he humbled himself by becoming obedient to death — even death on a cross! (Phil 2:5-11)

Jesus was not even born “center stage” in Jerusalem. He was born near the wings, in a small village out in the sticks. When you’re The Light, you don’t need the spotlight.

And what happened that first holy night would be seen all over the world and felt all through eternity.

I have to admit, I had a big problem with that mega-church production when they went from Linus to Lion King. They got it wrong where God got it right. Sure, in the world, we tend to go from quiet to grand. The soft solo to the bombastic spectacular. And yes, the audience cheered the epic “Circle of Life” number. But were they impacted? Were they awed? Didn’t appear that way to me. You never score when you go from God’s way to the world’s way.

Put yourself in the “audience” 2000 years ago. God’s story has already unfolded with lots of drama, excitement, big numbers, huge expectations. God’s going to show up in epic splendor. You’re pumped. You’re excited. But you begin worrying. The prophetic has ceased. The lights go dark. “What is going on?” you wonder. “Where is God?”

… there were shepherds living out in the fields nearby, keeping watch over their flocks at night.  An angel of the Lord appeared to them, and the glory of the Lord shone around them, and they were terrified. But the angel said to them, ‘Do not be afraid. I bring you good news that will cause great joy for all the people. Today in the town of David a Savior has been born to you; he is the Messiah, the Lord. This will be a sign to you: You will find a baby wrapped in cloths and lying in a manger.’

Suddenly a great company of the heavenly host appeared with the angel, praising God and saying,

Glory to God in the highest heaven,
and on earth peace to those on whom his favor rests.

Has anything more beautiful ever been staged? Any words more potent? In the only production that really matters, God cast himself. He humbled himself. He gave himself in a little town called Bethlehem.

Wow. Doesn’t that make you want to break into the Snoopy Dance?