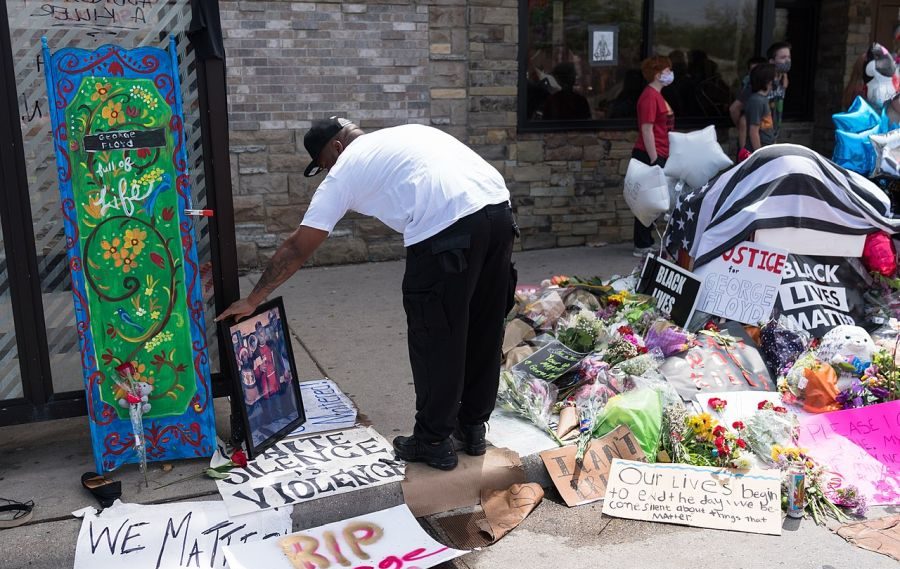 A man leaves a photograph at a memorial for George Floyd on Wednesday afternoon, after the death of Floyd on Monday night in Minneapolis, Minnesota.

It has now been months since the death of George Floyd, and I’m left wondering what Floyd would think of the “activism” that has been done in his name.

I personally did not know Floyd, but people close to him have shared about the kind of person he was. Once an extremely destructive young man, it seems that he eventually discovered the grace of Jesus Christ, changed the course of his life, and helped others do the same. Floyd’s conversion to Christianity provides an important insight into the consequences of sin, as well as the kind of justice he would want others to strive for if he did indeed adopt a biblical worldview.

I’ll describe that vision shortly, but I’ll pause here briefly and say I’m aware of the details surrounding his death — that he died with drugs in his system and counterfeit money in his possession. It’s clear that he was not acting in accordance with Christian principles in the moments leading up to his death. This is deeply unfortunate, but I would still like to treat George Floyd how I’d hope to be treated if my various sinful inclinations and actions came to light after my death. I hope others would still remember that Jesus saved me and changed me for the better despite the many times I’ve failed Him — which is why I will extend that grace to Floyd as well.

Because Floyd was a Christian, that means his identity was primarily found in Christ’s forgiveness rather than some worldly identifier like class or skin color. And yet he has become the face of a hateful, race-obsessed political movement. Sadly, in people’s haste to avenge him, they have idolized him, exploited him, and grossly warped the gospel message that ultimately saved him from sin.

I think there are appropriate ways to remember and respect someone after their death; however, the line between paying one’s respects and flagrant idolization has clearly been crossed. Note the way Floyd’s body was paraded around crowded streets in a golden casket in various “tours” throughout the country. And yet for months various tyrants have limited the public’s ability to assemble, worship at their churches, or see their dying loved ones. Those restrictions were eased only in circumstances relating to Black Lives Matter no matter how destructive.

These aren’t the only instances of idolization. Perhaps one of the most bizarre and eerie displays is a recently unveiled traveling hologram which features a gold, glittering, larger-than-life George Floyd projected into the sky. It appears that even in our increasingly secular culture, people are still clamoring to worship something. Similarly, America Magazine went on at length about the many “similarities” between Floyd and Jesus Christ and ultimately concluded that “the crucifixion of a black man on a street-corner Golgotha” answers questions about how “racial oppression infests our history, our culture and our institutions.” Such a strange, hyperbolic statement is an impossible burden for Floyd — a grievous sinner just like the rest of us — to bear.

Sadly, it’s obvious that many people have twisted history, reality and reason in their efforts to fashion Jesus into the image of what they believe Floyd represents rather than humble themselves before a real and perfect God who has nothing to say about so-called “social justice” and everything to say about real justice. Such extreme levels of misguided adoration do not reflect reality, nor do they honor Floyd’s Christian faith.

Another abhorrent response to Floyd’s death is widespread exploitation and manipulation on the part of Black Lives Matter leaders, anarchists and criminals, and Democrat politicians. As we’ve seen for months now, various individuals and groups have used protests as an excuse to antagonize and harass people, destroy property, loot and murder. ANTIFA members have used protests as a springboard for their communist brand of violent “activism,” while many BLM supporters have justified the death and destruction taking place in major cities as a valid form of protest. Corporate media outlets have covered for both groups’ terroristic actions to a comical degree by insisting that “peaceful protests” somehow entail flames and dead bodies.

Perhaps more than any other group, Black Lives Matter (the official nonprofit) has used the death of George Floyd to further their admittedly Marxist agenda and raise millions of funds for progressive politicians (their hope being that by electing more Democrats they’ll finally be able to enact a more radical anti-American agenda.) Rather than address their mounting policy failures in black communities across the nation, Democrats instead donned colorful Kente scarves and knelt in apparent reverence for a man whose name they can’t even remember. That wildly awkward photo-op was a perfect picture of exploiting a tragedy for political gain — something Democrats have mastered thanks to their devotees in the media.

As a whole, the results of social justice-related activism have been as devastating, particularly for the black community. Major cities are experiencing soaring violent crime rates. Businesses have been destroyed in difficult economic times. People (including numerous children) have been murdered in the violent fray. Fueling it all are people who keep insisting that justice will only be achieved by forcing equal outcomes through governmental coercion and chipping away at everyone’s freedom and autonomy in the hopes of achieving an unattainable version of “equality.”

It’s clear from these things that the social justice gospel is not the true gospel. Its fruits are self-pity, envy, partiality, and hatred for one’s neighbor under the guise of intersectionality — the theory that people can (without consequence) be hateful and controlling towards others depending on which victim class they belong to.

One of the most praiseworthy responses to his death has come from black Christians who have taken a stand against the Black Lives Matter movement and boldly pushed back against the false progressive distortions of Christianity. Monique Duson, Voddie Baucham, Darrell B. Harrison and many others have used their platforms to draw people closer to God’s divine justice rather than distract them with constructed grievances. Writer Samuel Sey communicated the message simply but powerfully in a recent tweet:

The most liberating event in history for black people isn’t the end of the slave trade, the end of segregation, or the end of colonialism.

The most liberating event in history for black people (and all sinners) is the death and resurrection of Jesus Christ.

If Floyd was truly a Christian, he wouldn’t be destroying cities or stealing from others. Instead, he’d be pointing others to the true and perfect Judge. Let’s pray that those who claim to care about Floyd stop using him to advance their own destructive agendas and instead open their hearts to the Gospel that saved him.

Carmen Schober is the editor-in-chief of Staseos. She is a wife, mother, fiction writer, cultural commentator, and MMA fan. She earned her Master’s in Creative Writing and English Literature in 2015, and she enjoys writing about theology, culture, and storytelling.