Happy Trails! Bernie Hits the Field of Dreams, Warren Gets Doubled Up 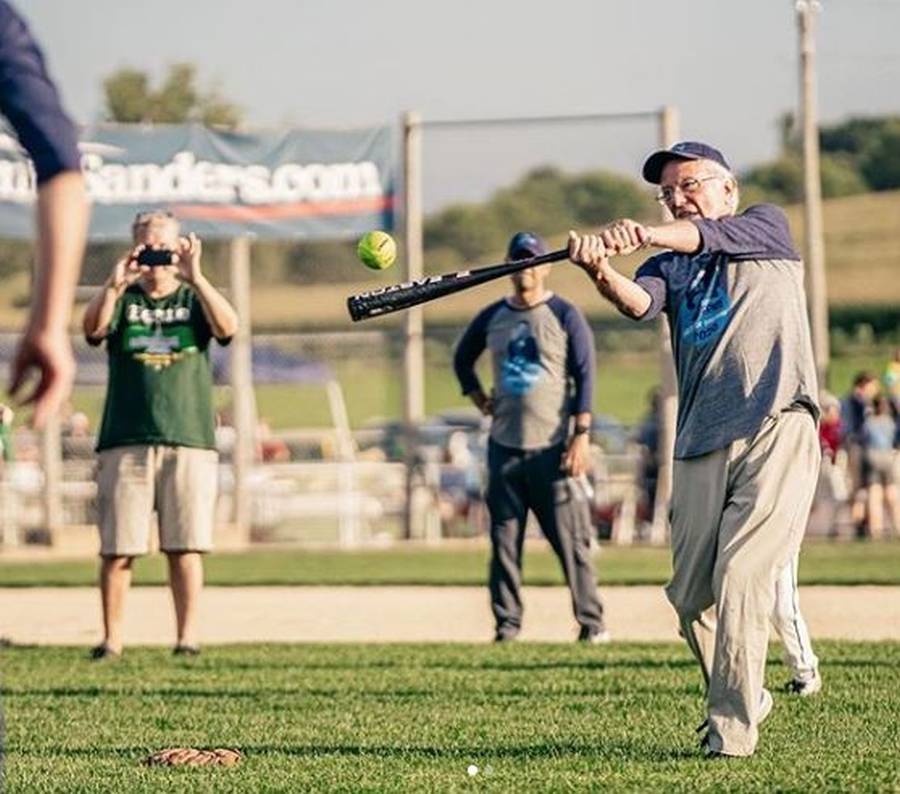 Looks like absent the Second Coming or an errant asteroid we will be stuck with the 2020 campaign for another 440 days. And with all the bitterness and division in the country we might as well have a little fun along the way.

So welcome to the first edition of Happy Trails. A quick look at the fun happenings along the campaign trail.

Say, I Thought He Was a Lefty!

Running for president does come with some awesome perks. For one thing, you get to go to the Iowa State Fair and eat tons of fried food under the guise of campaigning.

There’s no elegant way to eat a corn dog: Here are the Democratic candidates at the Iowa State Fair https://t.co/qZvVJ6efq0 pic.twitter.com/qv2QW0Nm3c

You get to spend your work day going down slides.

Rules of the road for the #IowaStateFair:

And if you’re an old baseball fan from Brooklyn you get the chance to play ball with long gone legends.

On Monday afternoon Sen. Bernie Sanders visited the “Field of Dreams,” the iconic baseball field carved out of acres of Iowa corn for the movie Field of Dreams. In fact, Bernie donned a #46 jersey — as in our 46th president — and played! He pitched. He hit. He ran. Talk about putting the fun in “fundraiser.”

In fact, the game was originally supposed to be against the media, but when they discovered the event was indeed a Sanders fundraiser several outlets balked. (Yes, I said “balked.”) What’s the big deal? Wouldn’t have been the first time the media served up softballs for a Democratic candidate.

Bernie’s opponents, mostly from a local charity, were flesh and blood, not ghosts. But you can’t be on that pristine diamond and not imagine you’re pitching to Shoeless Joe Jackson. Or other members of the ill-fated “Black Sox” team. (Had Bernie been around in 1919, he certainly would have rooted for the Reds in that series. He always roots for the Reds.)

Of course, under Bernie’s socialist plans we’d end up with more shoeless Joe’s … and Carla’s … and Hectors …

Now, watch the clip and listen carefully. Can you hear a whispered voice from the cornfields? “If you build it, he will tax it ’til you have to shut it down.”

Of course, if Elizabeth Warren were there she’d be running onto the field screaming at farmer Ray Kinsella, “You didn’t built that!”

Joe Biden would be insisting he met Shoeless Joe at the White House after the Sox won the 1919 series.

Marianne Williamson would be hearing voices too, but it wouldn’t be dead baseball players. It’d be her spirit guides.

Corey Booker would flex his muscles and shout about having his “Mickey Mantel moment.”

Meanwhile, President Trump would be sitting in the stands scarfing a hot dog, insisting a Trump baseball field he built was much bigger and more beautiful. (But would any doctors at the game step across the line and stop him from choking?)

By the way, Bernie’s team ended up losing 14-8. However, Bernie did knock in his team’s final run with a base hit. Afterwards he complained about the unequal distribution of runs.

Congrats to Bernie for getting into the game. The question is, will he “Go the Distance!”?

Unfortunately for Bernie, he now has two Elizabeth Warrens in his way.

Check out this picture:

You are not seeing double. Last night in Minnesota, Elizabeth Warren met her doppelganger. Her name is Stephanie Oyen. The resemblance is so uncanny, Stephanie was mobbed by people at the campaign event yelling “Senator Warren!” Oyen kept trying to tell people, “I’m not her!” But nobody seemed to believe her.

In fact, Oyen’s Warren-esque hand waving and head bobbing made folks even more convinced she was the senator. They kept running up to her, saying “You’re my hero!” and taking photos. Trump almost tweeted her about her lack of Native American heritage. “I felt so bad,” says Oyen.

Finally, to settle things down, she removed her glasses and blazer.

Eventually Oyen did meet up with the real Elizabeth Warren. Unfortunately for fans of the movie Dave, Warren did not say, “Just get rid of the grin. You look like a schmuck.”

Warren simply pointed at her wardrobe and joked, “We have to talk.”