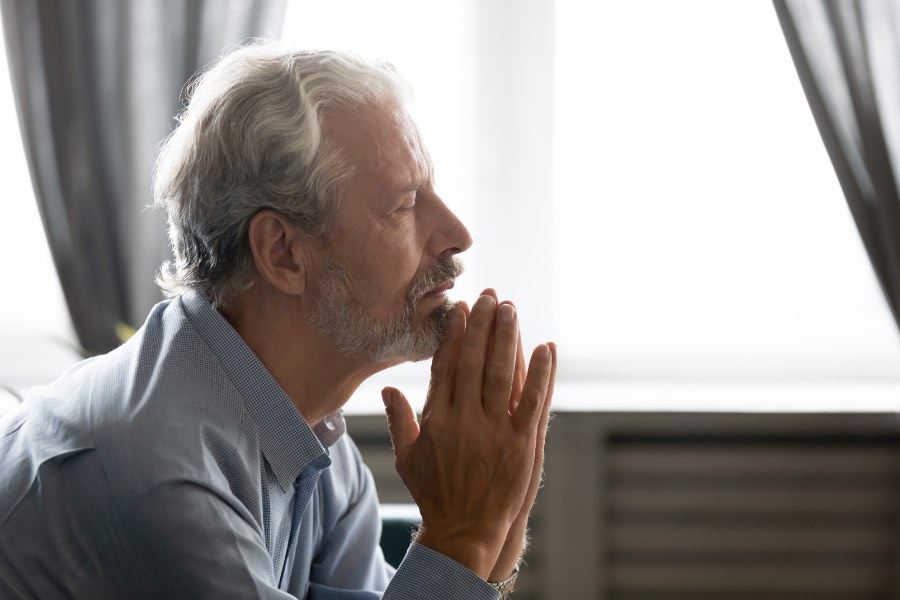 I have known this feeling all too well: the days dull and damp with dread; isolated, alone, not knowing when or how things will come out, but fearing it’s going to get a lot worse before it get’s better.

By God’s grace, though, I’ve also known real hope, even in the same dark circumstances. It’s been good practice for this crisis.

Ten Weeks in the Hospital

I spent the summer of 1978 in the hospital — 69 days in all. The doctors and I were trying to stave off major abdominal surgery. I was on a clear liquid diet near that whole time, my nutrition coming intravenously. Orderlies wheeled me down to x-ray several times a week, and each time we’d pass a door marked “Surgery.” Each time I saw that word I shrank back in dread. (I have promised my wife I would never tell her more about the treatments I had to undergo then.)

Otherwise it was weeks of sameness, weeks of stuckness. The treatments failed. Surgery happened anyway. At least it was finally over. I can’t tell you the relief when I was finally discharged and went home to recover.

I’ve known the feeling much more recently, with six major foot surgeries over the course of seven years. The last one was late in 2018. Each surgery meant a week in bed to control swelling, and six to ten weeks on crutches or a knee walker. I’ve logged something like 25,000 hours in fracture boots, casts, and post-surgical splints.

Worse than that, though, for about three or four of those years I was “six to eight weeks to full recovery.” I don’t fault the doctors for getting it wrong — it’s just how things came out — but it meant three or four years of continual, repeated disappointment.

The Same Feeling, Only This Time It’s the Whole World

Today it feels like all the world is sick and injured.

And I’m not even talking about the most acute points of pain, where individuals are fighting for their lives, and medical teams are risking theirs to fight along with them. I’m talking about the dull dread most of us are facing in our homes, isolated, cut off (many of us) from our work and our income; knowing something is desperately wrong; not knowing how bad it’s really going to get; not knowing when it will ever end. And especially not knowing what we can realistically hope for.

Hope. That’s the key word, isn’t it? Hope can bring a person through almost anything. It ought to be realistic hope, though; not just “manufactured-so-I-can-make-it-through” hope. Manufactured hope is often false hope, and when reality defeats a false hope, the result can be crushing.

No, we need real hope. I don’t know what the real hope is, for coming through this medically or economically. No one does. We’ve never been here before, and the range of possibilities is too wide. It could be a vaccine or an effective treatment will put an end to the virus later this year, or it could be it’ll mutate and start the whole horror all over again. There could be perfectly peaceful celebration at the end of it all, or there could be eruptions of angry, irrational violence. In any event the world’s economies are going to suffer for a long time to come.

Real hope? With possibilities like that in our future? Seriously? It reminds me of another hard period, following a 7.4 earthquake that left us homeless for a week, when I had asked, “If you can’t trust the ground you walk on, what can you trust?”

You can trust in God.

I’ve dwelt at length here on how rough things are, how bad it feels to many of us, how unknown the future is. I’ve done that for a reason: We need to name what it is that we’re facing, to look it square in the eye, not denying its awful reality for a moment. The psalmists never denied reality. Neither should we.

Like the psalmists again, though, we should recognize there’s a lot more to reality than meets the eye.

God is real. He’s eternally real, more real than the problems we face, and loving and powerful enough to carry us through. Days from now is Easter. It’s good timing for us, with its great message that He can bring us even through death. Nothing ever looked as hopeless as Jesus’ crucifixion and burial; nothing ever came out more spectacularly joyful in the end.

The psalmists knew that, too. If there’s one thing that’s helped me through it all, it’s been the message of the Psalms (I recommend Psalm 34 for starters). Two things, actually: the Psalms, and the Resurrection. Together they tell the reality of a God who loves us forever and without fear of defeat, no matter what we go through.

We may still need surgery at the end of it all. I did. I’d have died without the operation in 1978, and I’d be permanently crippled now without the foot surgeries I’ve had since then. Sometimes, unfortunately, the knife really is necessary. Indeed, I wonder whether we’re going through spiritual surgery right now, here in America and across the globe, to excise false hopes and false beliefs, and implant in us the truth of God through Jesus Christ.

Whether that’s the case or not, either way there’s a good reality waiting on the other side of it all, because there’s a very good Reality active during it all: the reality of God Himself. We can hope in Him.

Never forget: No matter what else happens, we can hope in Him.