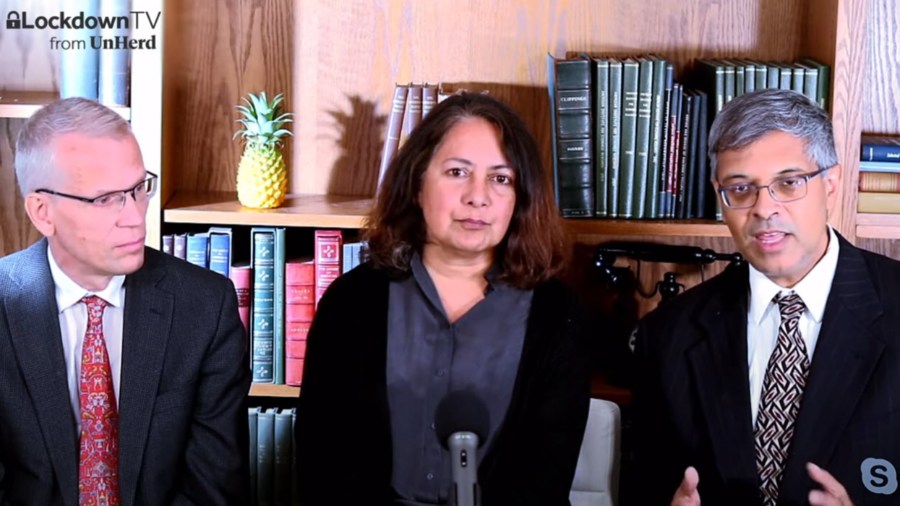 Epidemiologists Dr. Martin Kulldorff, Dr. Sunetra Gupta and Dr. Jay Bhattacharya met in Massachusetts over the weekend to sign a declaration calling for a different global response to the COVID-19 pandemic.

On October 1-4, a trio of epidemiologists met in Great Barrington, Massachusetts, to discuss an alternate strategy for dealing with the COVID-19 crisis. Dr. Martin Kulldorff (Harvard University), Dr. Sunetra Gupta (Oxford University), and Dr. Jay Bhattacharya (Stanford University) called their approach: Focused Protection. It offers a way of protecting the vulnerable while still minimizing impact on other physical and mental issues.

In an interview with Freddie Sayers, Dr. Kulldorff said, “When dealing with public health, you cannot look only at one disease. You have to look at public health very broadly.” He said our current strategy has not been very effective, and worse, it “has generated an enormous amount of collateral damage.” He listed, “plummeting vaccination rates, less cancer screening, worse outcomes from cardiovascular disease and mental health problems.”

At the close of their meeting Sunday, they released an official statement of their proposal called the “Great Barrington Declaration.” They admit that the Declaration itself is nothing revolutionary. In fact, many scientists have been saying the very same things since March. But those recommendations have been dismissed in favor of more draconian (but not necessarily effective) methods.

Protect the Vulnerable, Free the Children

To this trio of scientists, “protecting the vulnerable” is not just a concern about people in high-risk categories. Though it certainly covers that. As their Declaration states: “Keeping these [current] measures in place until a vaccine is available will cause irreparable damage, with the underprivileged disproportionately harmed.” They are concerned about the wider social harm the present strategy is inflicting, both now and for the future.

Current policies have been most detrimental to children who are the least at risk of mortality due to COVID-19. Allowing children to return to school, they argue, is not only best for their long-term mental and physical health, but it would ensure a quicker path to herd immunity. That’s the point at which the rate of new infections becomes stable, which can be helped by (but does not depend on) a vaccine.

Within the first 24 hours of its release, the Declaration received more than 5,000 signatures. This morning, it garnered hearty approval by Sen. Rand Paul:

Over 2300 Health scientists and over 2500 MDs sign Great Barrington Declaration proclaiming that low-risk individuals should be freed from COVID restrictions immediately.

You can read the full Declaration here, along with each of the doctors’ impressive bios and the growing number of signatures. And you can watch their full interview with UnHerd below: